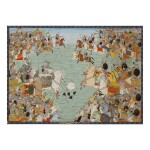 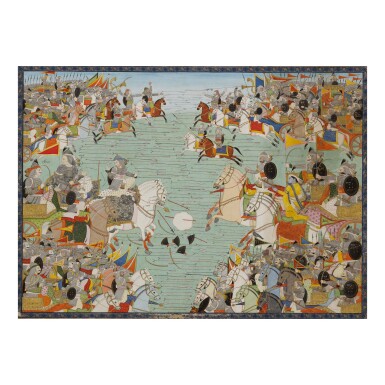 AN ILLUSTRATION TO THE MAHABHARATA: THE PANDAVA AND KAURAVA ARMIES FACE EACH OTHER IN COMBAT

On the plains of Kurukshetra two mighty armies face each other in a cataclysmic battle. This is the climactic end to the epic Mahabharata, where the eighteen-day War of Kurukshetra is described in such vivid detail that it comprises more than a quarter of the text.

On the left we see the Kaurava army led by their charismatic commander and elder Bhishma seated in a chariot drawn by four white horses. Next to him in a chariot drawn by four brown steeds is Duryodhana, the eldest Kaurava. Bhishma is wounded by a volley of arrows unleashed at him by the warrior Shikhandi fighting on the side of the Pandavas. As the epic relates, Bhishma had vowed that he would never raise arms against a woman. For this reason the Pandavas deputed Shikhandi, who had been born a woman, to lead the assault against Bhishma. The great warrior is shown with his face turned away as Shikhandi’s arrows pierce his body and eventually fell him. This episode occurs on the tenth day of the battle and marks a turning point in the fortunes of the combating armies.

The Pandava army at right, is led by Krishna, serving as charioteer of Arjuna, with Bhima, Nakul, Sahadev, Satyaki and others in their flanks. The principal figures are identified with inscriptions in black or gold ink either on their shields or above their heads, typical of the works of Purkhu, one of the principal artists of the Kangra court under Raja Sansar Chand.

The painting is remarkable for its dynamic movement, individualized portraiture, crisp modeling, and the use of diagonals to enhance the effect of action and confrontation. The order and geometry of the composition is offset by the flurry of weapons strewn on the battlefield as the two sides are seen bearing down upon each other.

For other works from this series see E. Isacco and A. L. Dallapiccola, Krishna the Divine Lover: Myth and Legend through Indian Art, London, 1982, fig. 91. A leaf from this series is also in the Government Museum Chandigarh and is referenced in J. Seyller and J. Mittal, Pahari Drawings in the Jagdish and Kamla Mittal Museum of Indian Art, Hyderabad, 2013, p. 181. PROPERTY OF A NEW YORK CITY COLLECTION
AN ILLUSTRATION TO THE MAHABHARATA: THE PANDAVA AND KAURAVA ARMIES FACE EACH OTHER IN COMBAT, INDIA, KANGRA, CIRCA 1810
Lot Closed
Lot 382