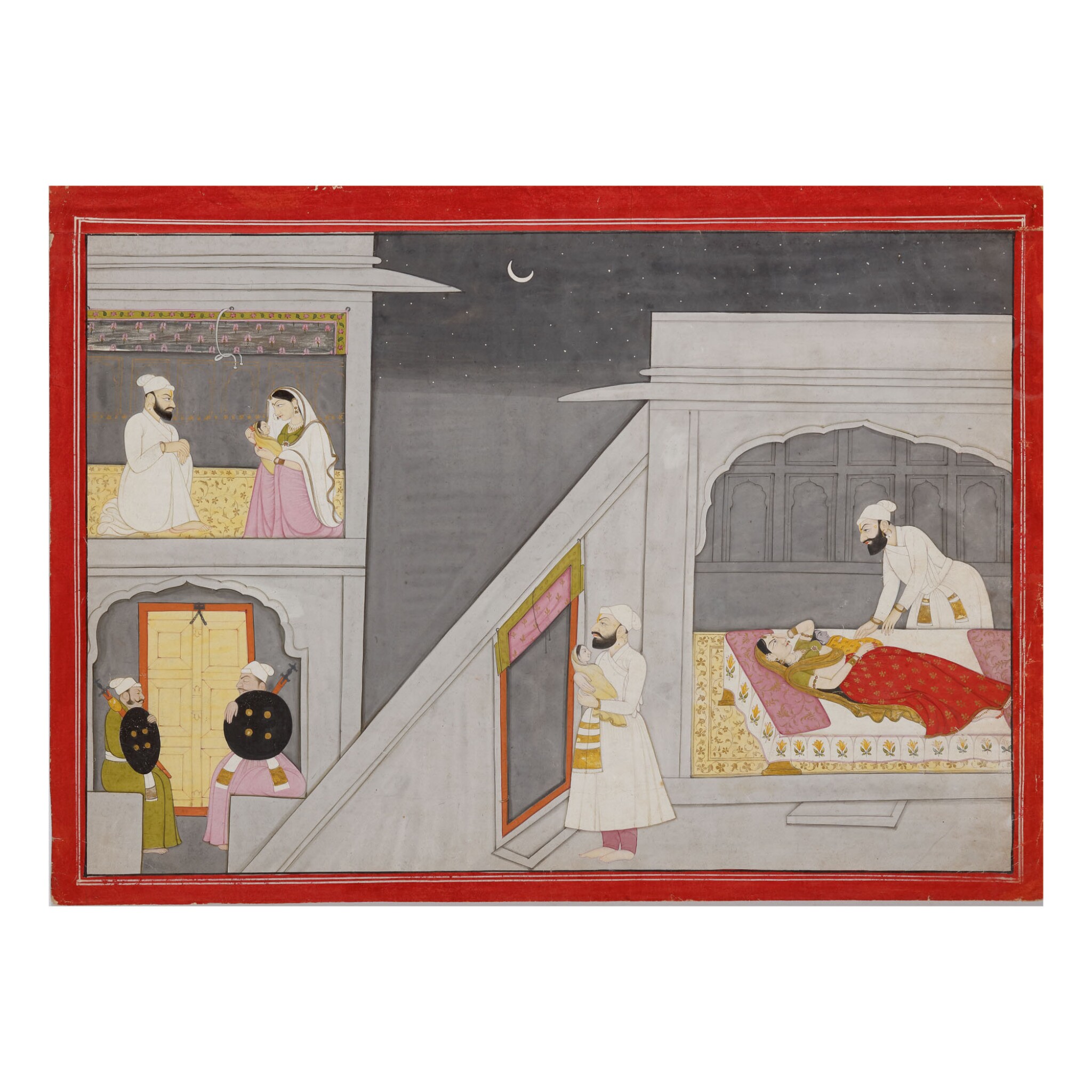 AN ILLUSTRATION TO A BHAGAVATA PURANA SERIES: THE EXCHANGE OF THE BABIES

This large-scale illustration depicts the exchange of the babies orchestrated by Krishna’s father Vasudeva soon after the birth of Krishna, his eighth child – decreed by divine prophecy to be the vanquisher of Vasudeva’s foe the evil king Kamsa. On the right we see Vasudeva laying the blue-skinned baby Krishna swaddled in a saffron cloth by the side of Yashodha, wife of his cousin Nanda, who is asleep after having delivered a baby girl. Vasudeva is seen carrying the child, wrapped in a soft yellow blanket, from Gokula back to his prison cell in Mathura evading discovery by the drowsy guards. On the left his wife Devaki, who has awoken from her own post childbirth rest, cradles the girl child in her arms as her husband looks on.

As the legend relates, this child is none other than the goddess Yogamaya. When Kamsa comes to slay her, as he has done the seven children borne by Devaki before, the child ascends to the heavens with a warning to Kamsa of his impending doom, exactly as prophesied.

This dispersed series is amongst the most well-known of Pahari albums and also one of the most widely discussed in terms of its authorship and date. A well-published folio from the series in the Edwin Binney 3rd Collection, is dated 1769 but since this date is not part of the colophon there is debate amongst scholars about a 1760-65 versus a 1770-80 date for the album.

W. G. Archer had initially ascribed a Basholi origin to the series but later, B. N. Goswamy attributed the bulk of the works in this series to Fattu, eldest son of Manaku of Guler, see B. N. Goswamy and E. Fischer, Pahari Masters, Zurich, 1992, p. 314. Indeed, all the paintings in this album are characterized by a planar geometric spatial treatment of backgrounds combined with very finely executed figures. For other works from the series, also attributed to Fattu, see Bonham’s London, April 21, 2015, lot 187 and Christie’s South Kensington, June 10, 2013, lot 277.