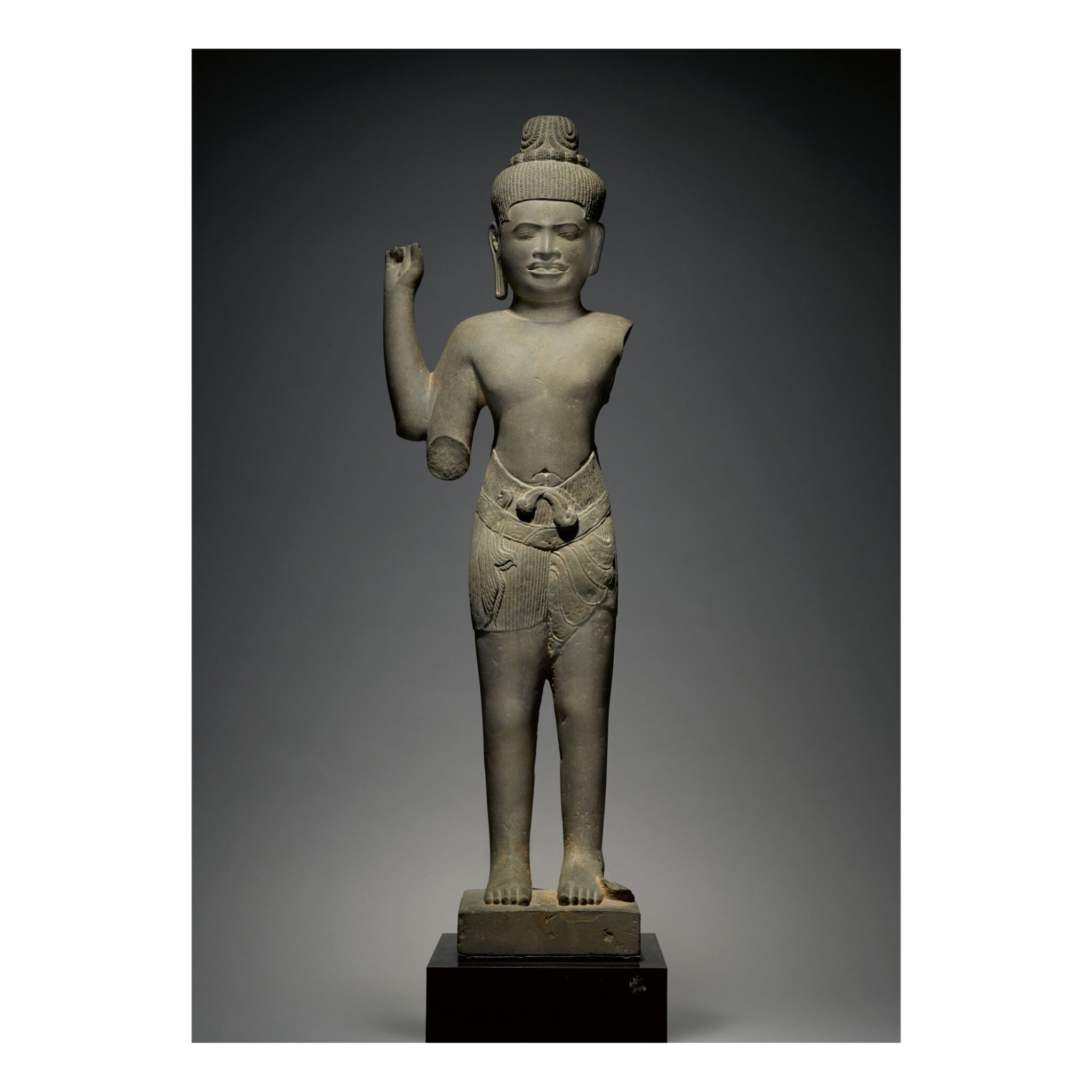 A GREY SANDSTONE FIGURE OF SHIVA

standing on a square pedestal, wearing a short sampot with finely striated vertical pleats, plain belt passing around his hips and securing a stylized dagger and overlapping pocket-fold, the drawstring looped beneath his navel, his rounded face with bow-shaped mouth, incised mustache, triangular nose, small almond-shaped eyes, arched eyebrows in relief, and third eye indicated vertically on his forehead, his hair tightly matted in spiral braids arranged vertically, the chignon secured at the base with a strand of large ovoid jewels

In this finely carved sculpture, Shiva exudes authority and power. The deity is shown standing in a frontal posture, his broad shoulders tapering down to a narrow waist hugged by a sampot worn high with a knot in the front, its vertical pleats delineated precisely, one end opening into a large fan-shaped fold over his left leg and the other end draped in a ‘fish-tail’ fringe on his right leg. The garment is further secured by a sash tied at the hip terminating in the form of a large butterfly-shaped bow at the back, a motif introduced during the Baphuon period.

Within the local context of Hindu worship during the Khmer Empire, Shiva played a dominating role as the main deity of worship. Stone sculptures depicting the Lord show him as the divine ascetic - his smooth skin exposed wrapped only in the pleated fabric of a sampot. The classicism of the sculpture, stripped of its excess, shows an aestheticism that in its simplicity portrays refined elegance and power. The Baphuon period favored this more polished aesthetic rendering forms with an idealized sense of both beauty and grace.

Shiva’s face, showing both command and introspection, is characterized by rounded cheekbones, full lips, almond-shaped eyes and gently arched brows centering the third eye on his forehead. His facial hair is indicated by delicately incised lines whilst his braided locks are arranged in a domed chignon on his head, its plaited loops secured by a string of rudraksha beads closely associated with the deity. Despite its idealized form, Shiva’s countenance bears elements of portraiture contiguous with the Devaraja or God King cult popularized by the Khmer rulers.

Another example of Shiva, illustrated in W. Felten and M. Lerner, Thai and Cambodian Sculpture, London, 1988, cat. no. 27, shows the same exquisite modeling of form which harmoniously integrates with the detailed patterning of the sampot and hair. In both this as in our present sculpture, the crisp lines flow seamlessly between fabric, hair and skin, unifying the different elements and presenting the viewer and worshiper with an object of devotion that is restrained, refined, dignified and powerful.