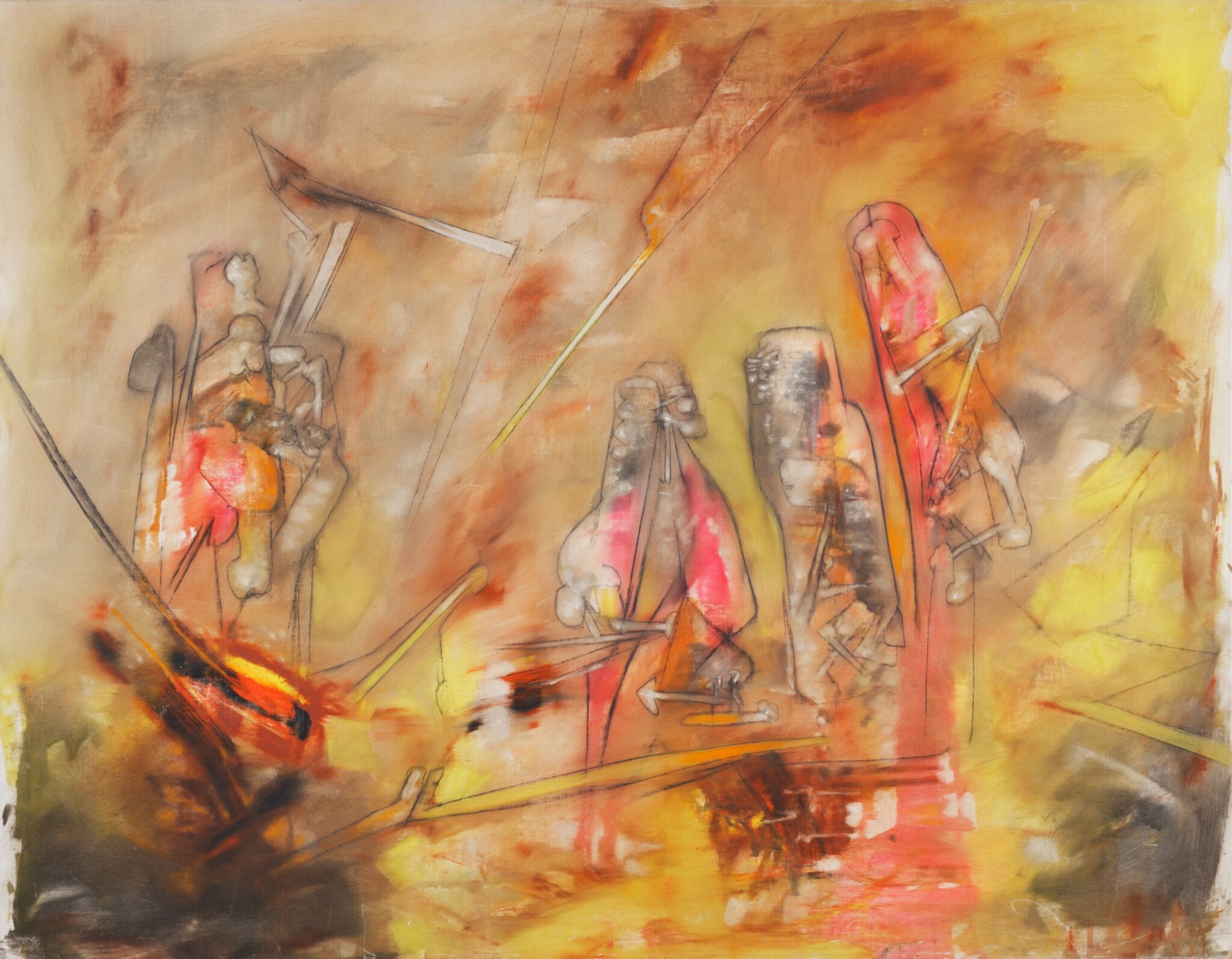 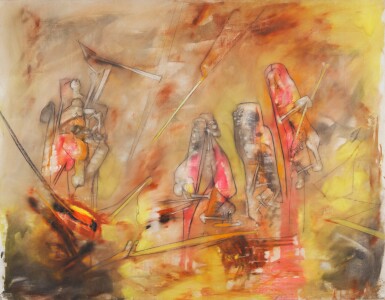 This work is accompanied by a certificate of authenticity signed by Madame Germana Matta Ferrari.

Dating from 1958, this canvas was painted at a key moment in the career of the Chilean artist, born in Santiago in 1911. In 1957, the Museum of Modern Art in New York gave Matta his first real retrospective exhibition, which was later presented at the Walker Art Center in Minneapolis and the Institute of Contemporary Art in Boston.

This marked the beginning of a period of maturity which followed on from a period that saw Matta divide his time between the USA and Europe. In Europe, before the Second World War, Matta became acquainted with the nebulous surrealist, Breton. Working on his arrival in Le Corbusier’s Parisian studio, the association was sealed by his contribution to the Minotaure journal. It first began at the beginning of the First World War with his stay at the Château de Chemillieu with Breton, Kay Sage and Tanguy, which had some influence on his work. This retreat resulted in the Psychological Morphologies or Inscapes series, which were inspired by the mechanics of automatic writing.

Fascinated by the fluctuating energy of the universe, Matta sought to represent in his landscapes where the boundary oscillates between figuration and abstraction, the fluctuations of the human psyche: “Matta gave himself the task of recreating the painting by abandoning the traditional route of figuration and the contemplative route of abstraction. Wanting to make the movement of the affects visible and tangible, the artist relied as much on his intuition for architecture and urban planning as he did on his trials as an experimenter and cosmologist, as well as his talent as a painter [...]. A painting by Matta essentially comes down to letting the tones and intensities of an emotional field vibrate” (Matta, Du Surréalisme à l’histoire, Marseille, Cantini Museum, 2013, p. 29). The work of 1958 attests to this quest and this conquest of another space where thoughts are made fertile. Concretion of both organic and cosmic forms, the mental landscape that Matta draws and colours in boundless perspectives is tinted with a lyricism that evokes the great American abstract painters, Pollock and Franz Kline.

In 1958 Matta was in the United States. Always wondering about the meaning of the world as a dynamic of tensions and emotions, Matta is an artist who was concerned with politics as an organising notion, if not of the universe then at least of men. One example from this same year was La Question, an openly political painting that Matta created, which echoed the book written by his friend, Henri Alleg on the issue of torture in Algeria.

A large-scale piece, the painting of 1958, which is characterised by a chromaticism ranging from pale yellow to intense red, via degradations and whispers of orange, is part of this collective of horizons.

Bordeaux, le port et les quais is typical of Eugène Boudin’s (1824-1898) oeuvre in replacing a central subject with small figures under a bright sky. Because his father was a mariner and her mother were a maid on boats, Boudin developed an appreciation for the changing light of the coast and the paintings of seascapes from an early age. He received effusive accolades from his peers, most notably Baudelaire who used to refer to some of Boudin’s pastels on paper depicting studies of seascapes as “meteorological beauties” and both Corot then Monet in 1920 who dubbed Boudin “King of the Skies.” Courbet who was moved to declare: “My God, you are a seraph, Boudin! You are the only one of us who really knows the sky” (quoted in Ruth L. Benjamin, Eugène Boudin, p. 46). These skies inspired a new generation of painters, chief among them Claude Monet, to whom Boudin became a close friend and mentor. After observing Boudin paint for the first time, Monet declared: “Suddenly it was as if a veil had been torn from my eyes. I understood what painting could be. Boudin’s absorption in his work, and his independence, were enough to decide the entire future and development of my painting” (quoted in Peter C. Sutton, Boudin: Impressionist Marine Paintings (exhibition catalogue), Peabody Museum of Salem, Massachusetts, 1991, p. 54).

Boudin was one of the first to advocate painting in the open air as opposed to sketching outside and producing a finished composition in the studio, identifying him as a forerunner of Impressionism. The loose and sketchy feel of his paintings was quickly taken up by the younger group of artists who came to be known as Impressionists. The present lot was painted in 1873, one year before the first Impressionist exhibition was held in Paris. Boudin was invited to participate to this exhibition and sent three paintings, six pastels (including four depicting studies of skies) and four watercolors. His reputation then grew gradually, notably enabling him to travel around Europe (Flanders, the Netherlands, south of France and Italy). In 1988 he took part in the major Impressionist exhibition in New York organized by the art dealer, Paul Durand-Ruel, alongside artists such as Cézanne, Degas Monet and Pissarro.

Boudin painted 79 views of the prospering Atlantic port of Bordeaux during his stays to the city in 1873, 1874 and then 1876 and 1879. The present lot is a wonderful example of a depiction of the busy waterfront of this port along the river Garonne, the low horizon offering a great expanse to the luminous sky enabling the artist to demonstrate his free brushwork. His artworks are now found in numerous private collections and museums including the Musée d'Orsay in Paris, The Musée du Louvre in Paris, the National Gallery of Art in Washington, D.C., and the Art Institute of Chicago.