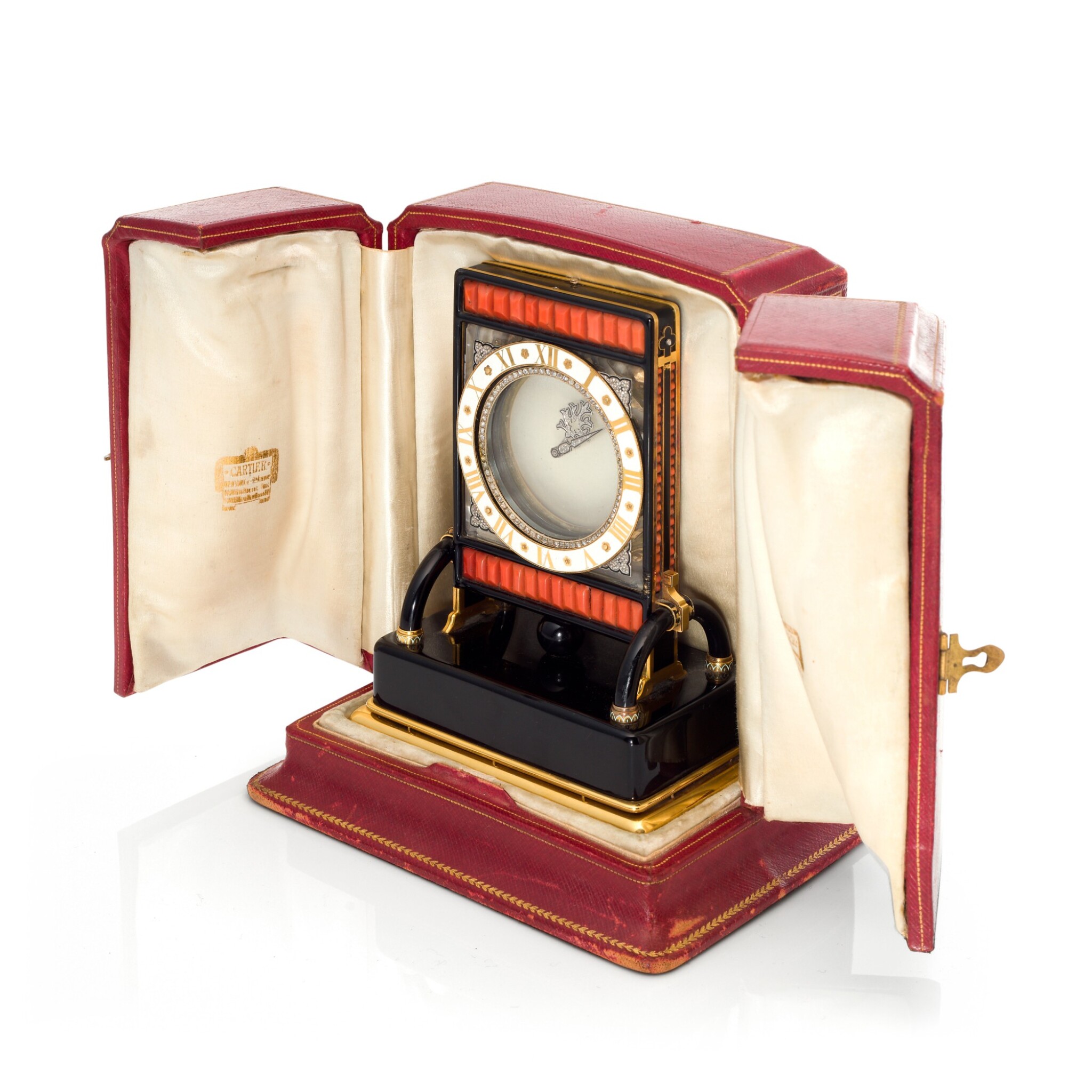 Case: rock crystal panel, yellow gold and white enamel chapter ring bordered by rose-cut diamonds, rose-cut diamond spandrels, all framed within a black enamel border enhanced with bands of baton coral in gold channel settings repeated along the case bands, and above and below the dial, all set upon an onyx base accented by black enamel arches and a central sphere

For assistance with the present lot, please contact our Specialist, Janet Tham for further assistance at Janet.Tham@sothebys.com.

The Cartier rectangular Ecran Mystery clock first appeared in 1923 and was produced in several variants through 1928. Research previously indicated that less than ten Ecran models exist, making the present lot an extraordinarily rare and delightful discovery.

From 1919 to 1936, Cartier created some of the world's most beguiling clocks. The period marked a heightened interest in exotic motifs from the East, and Cartier married this Asian influence effortlessly with the West's strong Art Deco style. The characteristic vertical form of these Ecran clocks are expertly tailored and likely inspired by early 19th century oriental room dividers and fire screens.  Indeed, when Cartier participated in the 1929 Paris Exhibition, such pieces promised 'the incarnation of an impalpable dream of the Orient.' (Barracca et al. pp. 81-2, 180.)

The first Mystery clocks were inspired by the work of the 1850s French magician and clockmaker, Jean Eugene Robert-Houdin. Maurice Couet devised the first Mystery Clock in 1913 which was named "Pendules Mysterieuses Model A." This name resonates with automotive pioneer Henry Ford's "Model T" car of the same period and, fittingly, the first Model A was sold at Cartier New York to American financial magnate, J.P. Morgan Jr.

The mystery is in the hands that appear to float in space without any connection to the movement, when, in fact, they are each fixed onto a separate crystal disc. These discs are each surrounded by a tooth-edged border and driven by a fixed vertical mechanism invisibly concealed within the frame. The mechanism is activated by the movement hidden in the base.

Coral-set Ecran models to have appeared in public auction since the 1990's:

Hans Nadelhoffer, Cartier, London, 2007, pgs. 280-285 for a discussion of Cartier Mystery clocks and for other examples of timepieces from the 1920s