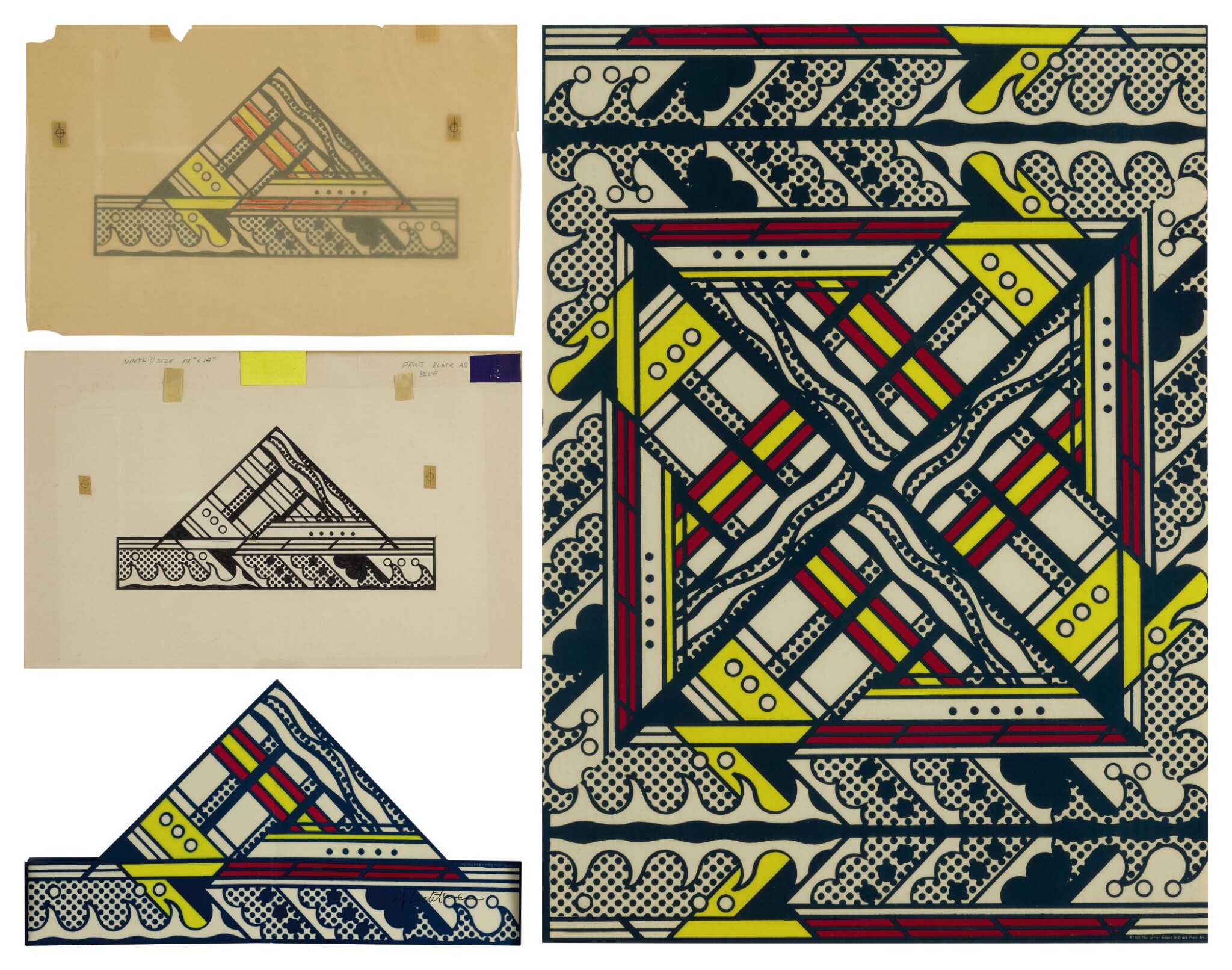 Cut painted paper, marker, graphite pencil, cut painted paper color swatches, tape on paper study, and colored pencil on tracing paper overlay, 1968, together with two examples of Folded Hat, offset lithograph printed in colors on a plastic sheet, the first signed in marker and folded, from the deluxe edition of 100 (total edition includes 2500 unsigned examples), the second an uncut printer's proof, from S.M.S. Issue No. 4, published by The Letter Edged in Black Press, Inc., New York, each component framed (3 works, the overlay framed with a reproduction of the study)

Hat (Study) and Folded Hat will appear in the forthcoming Roy Lichtenstein Catalogue Raisonné and are currently registered as RL3012 and RL3798, respectively.

William N. Copley’s publishing venture The Letter Edged in Black Press, Inc. produced an artist’s magazine titled S.M.S. (short for Shit Must Stop) that released six issues during its one- year span of operation in 1968. Issues appeared bimonthly between February 1968 and December 1968 and were produced in stated editions of 2,500 copies each, with 100 of these copies signed by participating artists and reserved for a special edition Deluxe Set.

Each issue of S.M.S. contained a portfolio of meticulously produced multiples by a variety of vanguard artists, writers, and composers. Among the contributors were Roy Lichtenstein, Bruce Nauman, Claes Oldenburg, Lee Lozano, Walter De Maria, Marcel Duchamp, Neil Jenny, Man Ray, Christo, Merit Oppenheim, Yoko Ono, H.C. Westermann, Richard Artschwager, and On Kawara. Many of the era’s most pioneering artists contributed to the magazine, which was conceived as an alternative to what was then a closed, parochial art world. It was a political statement as well as an artistic endeavor––a complex, portable “museum” that delivered facsimile artworks at democratic prices.

Looking back on the short-lived publishing venture, Copley recalled, “We were always looking for the impossible at that point.” Finally running out of money at the end of 1968, Copley decided to fold the magazine before the final sixth issue was delivered to subscribers in December. In the years since, S.M.S. has been featured in important studies of artists’ publications such as Gwen Allen’s Artists Magazines: An Alternative Space for Art (2015) and Hamburger Kunsthalle’s exhibition Artist’s Books: The Collection (2017). More recently, Alden Projects (New York) presented Publishing the Portable Museum: William N. Copley’s The Letter Edged in Black Press, an exhibition featuring archival ephemera and multiples from S.M.S., plus related material from William N. Copley’s other publishing ventures.