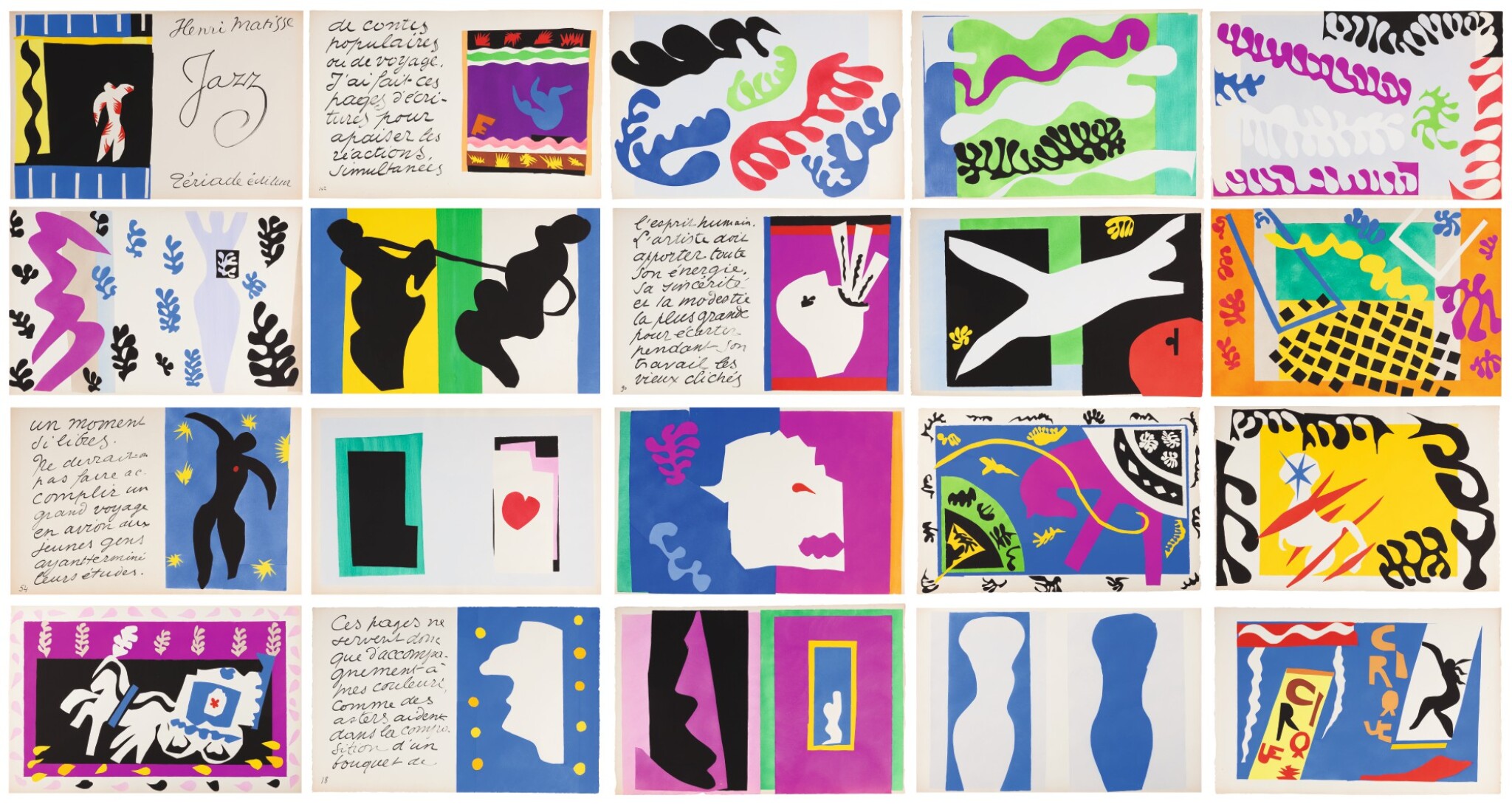 The complete portfolio, comprising 20 pochoirs printed in colors, 1947, signed in pencil on the justification page and numbered 85, from the book edition of 250 (there is also an unfolded portfolio edition of 100 without text), on Arches wove paper, with the table of images and text, contained in the original paper wrappers, grey paper boards and slipcase, published by Tériade, Paris (20 prints)

The book is in very good condition, the colors fresh and bright. (Portfolio slipcase broken at the seams.)

Living in Vence in 1943-44, his health ailing, Matisse was unable to paint or draw freely as he once had, returning instead to the cut-out technique he had worked with years prior in his preparations for a mural commissioned for the Barnes Foundation. Using only large shears and gouache-painted paper, he meticulously produced this series of twenty paper cut-outs that he published in his idiosyncratic and much-celebrated album Jazz in 1947, the images reproduced as pochoirs under the artist’s precise supervision at the printing press. Its subject matter drew immense inspiration from folktales and the circus, and in fact the series was once set to be titled Le Cirque. His publisher, Tériade, later suggested the title Jazz which Matisse welcomed for the connection it implied between art and musical improvisation. The combination of bright colors and spontaneous subject matter evoke a joie de vivre which further elevates Jazz as one of the most beautiful, groundbreaking and personal artist’s books of the twentieth century.

Matisse’s bold, exuberant paper cut-outs, a new medium unto themselves, appeal with their engaging simplicity yet also impress with their creative sophistication. John Elderfield writes of Matisse’s process in his book on these cut-outs, “With Jazz Matisse began using the Linel gouaches that characterized his subsequent cut-outs. He used those colors for Jazz because they exactly corresponded to the printers’ ink colors and therefore guaranteed exact color reproduction. Also in Jazz Matisse began extensively to develop a repertoire of formal signs using this highly saturated color. The increasing number of independently conceived cut-outs that followed Jazz …can be viewed as Matisse’s attempts both to codify his new vocabulary and to create a new syntax especially appropriate to it. In doing this, he was increasingly drawn toward an expansive all-over decorative format.” (John Elderfield, The Cut-outs of Henri Matisse, New York, 1978, p. 9).

Originally intended as illustrations for a poetry collection, in the end Matisse replaced the text with his own notes, which were originally written with a paintbrush in looping letters, providing a visual counterpoint to the bursts of colorful images. As Lucinda H. Gedeon writes in her introduction to the first issue of the Grunwald Center’s annual publication, dedicated entirely to the graphic works of Matisse, “Despite the assertion by Matisse, the poetic reflections included in the text on art, love, hate and his tracing of his development as an artist from his early law training to his new cut paper technique for which he coined the phrase ‘drawing with scissors,’ and in his advice to young artists, the text is certainly more than a visual accompaniment to the pochoirs. As Jack Flam noted it is more Matisse’s ‘artistic autobiography’—‘a summing up and an anticipation: Matisse’s synthesis of his past and his projected future’” (Lucinda H. Gedeon, “Henri Matisse, Introduction,” in Grunwald Center Studies, vol. I, Los Angeles, 1980, p. 11).