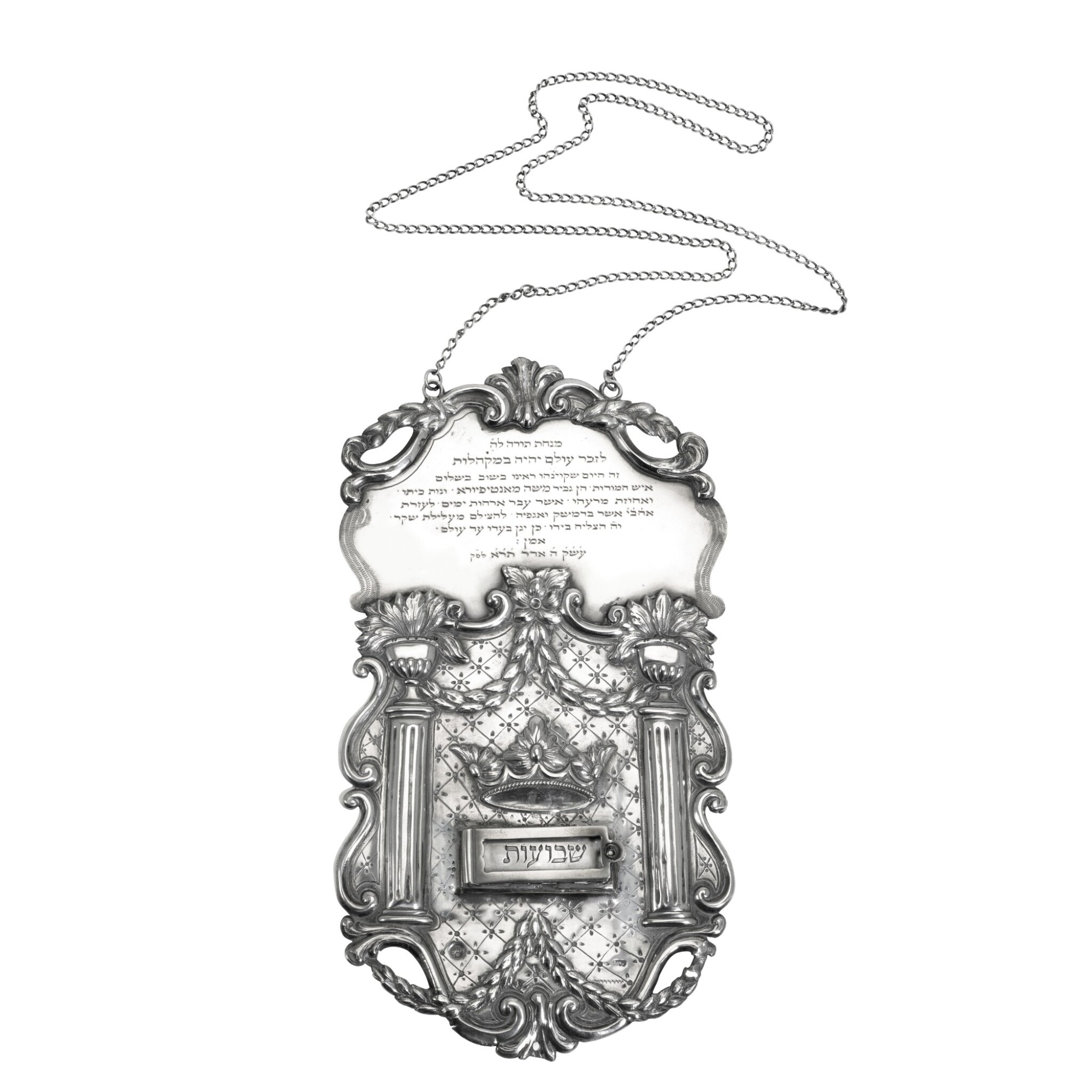 Presented to or in honor of Sir Moses Montefiore, 1841
Possibly the Great Synagogue, Duke's Place, London, bombed in 1941
By the mid 20th century in the collection of the United Synagogue, London
Selected c. 1970 for the Belmont Synagogue, London

The inserted plaque is inscribed in Hebrew:

A Thanksgiving Offering to God

May this be an eternal communal memorial

For the day we longed to see, upon the peaceful return of

The beloved leader Moses Montefiore and his wife

And a group of his friends, who went on a long sea journey to assist

Our brothers the Israelites in Damascus and its surroundings, to save them from a false accusation

And God caused him to succeed, so may He protect him forever

David Lerner has highlighted that the inscription is a melitza, with each line taken from a verse in the Biblical canon, a style common for German presentation pieces.

The Damascus Affair was a blood libel (ritual murder) accusation against the Jews of that city, triggered by the disappearance in February 1840 of a Franciscan monk and his servant. The French consul of Damascus, wanting to weaken the economic power of the Jewish community, started investigations and widely spread the blood libel, a European slander not common in the Arab world. After a “confession” extorted by torture, seven prominent members of the Jewish community were arrested and brutally tortured; two died and one converted to Islam. Sixty Jewish children were separated from their parents to pressure the community, and the local synagogue was pillaged. In March another six Jews were charged, but one was an Austrian citizen; through the efforts of the Austrian consul, the story began to get out. However, another blood libel accusation in Rhodes further inflamed the situation, and caused anti-Jewish riots in other Ottoman cities.

By mid April, the news was causing “a thrill of horror to run through all of Western Europe”. The perception was that France, by not disavowing the scheming of its consul, was treating the blood libel as fact – an attitude certainly taken by the Catholic Church. On April 21, 1840, Sir Moses Montefiore 1784-1885) convened a meeting at his house in Park Lane, including Isaac Lyon Goldsmid, David Salomons, and M. Crémieux, vice-president of the Consistoire Central in France. They entreated the governments of England, France and Austria to defend the Eastern Jews, and this was followed by meetings with Lord Palmerston, King Louis-Philippe, and Prince Metternich. However, the French government was swayed by the Catholic Church and its allied political wing, and Mehmet Ali, Ottoman Viceroy of Egypt, did not want to alienate his only ally among European powers.

The Jews of Europe resolved to send a mission to Mehmet Ali, with funds being raised worldwide. Sir Moses Montefiore, with Lady Montefiore, M. Crémiux, and others, left London July 7, after a meeting at Mansion House with the Lord Mayor and being received by Queen Victoria. Sir Moses was received by the Viceroy on August 4th, and negotiations continued until the 24th; Mehmet Ali originally offered a pardon, under the influence of the French consul, but Sir Moses insisted upon an act of Justice fully clearing the accused. By September it was delivered to Damascus and the nine prisoners – seven crippled for life – were released. On October 28 Sir Moses was received by the Ottoman Sultan Abdul-Medjid in Istanbul, and on November 11 he received a Firman that proclaimed the blood libel groundless, confirmed the equality of the Jews, and prohibited any molestation of them in the Sultan’s empire.

Sir Moses returned by way of Rome, where he remonstrated with the Head of the Capuchin Order for their role in the affair, and by Paris, where he presented King Louis-Philippe with a copy of the Sultan’s Firman. Sir Moses’ diary confirms that he and Lady Montefiore arrived back in Dover on February 26, 1841 – the date inscribed on this shield. On March 8, a Day of Thanksgiving was held in English synagogues, with testimonials presented to Sir Moses, and recognition by Queen Victoria.

The Berlin mark on this Torah Shield may suggest a German origin for the presentation (in 1840 the antiquarian transport of Jewish works of art was not yet common). A personal connection for Sir Moses was with Rabbi Dr. Louis Loewe (1809-1888), who received his doctorate from the University of Berlin and had connections with Hamburg and London. A personal friend as well as a translator, in 1840 he accompanied Sir Moses to Alexandria and Constantinople, and later served as director of the Judith Lady Montefiore College at Ramsgate, founded by Sir Moses.

Hamburg was one of the Jewish communities contributing money to Sir Moses’ trip, founding a committee to help the Jews of Damascus in June 1840, and corresponding with the London Board of Deputies, under whose auspices Sir Moses undertook his mission. On Montefiore’s return, Hamburg and Frankfurt sent testimonials, and David Lerner believes that this shield was probably one of the gifts from the Hamburg community. A collection of Sir Moses’ ritual silver, given to the sysnagogue he founded at Ramsgate, is still held by the Montefiore Endowment, but the earliest Torah Shield in the group is dated 1887, with the others from the 20th century.

This shield is next documented in London in the mid 20th century, in the collection of the United Synagogue, the group of English synagogues descending from the Ashkenazi Great Synagogue of London. The Great Synagogue had been established at Duke's Place in central London in the late 17th century, but was destroyed in 1941 during the London Blitz. About 1970, the shield was selected from the ritual silver holdings of the United Synagogue for the Belmont Synagogue, a new Orthodox community in north-west London.

We would like to thank David Lerner, of the Belmont Synagogue, for his assistance in cataloging this lot.