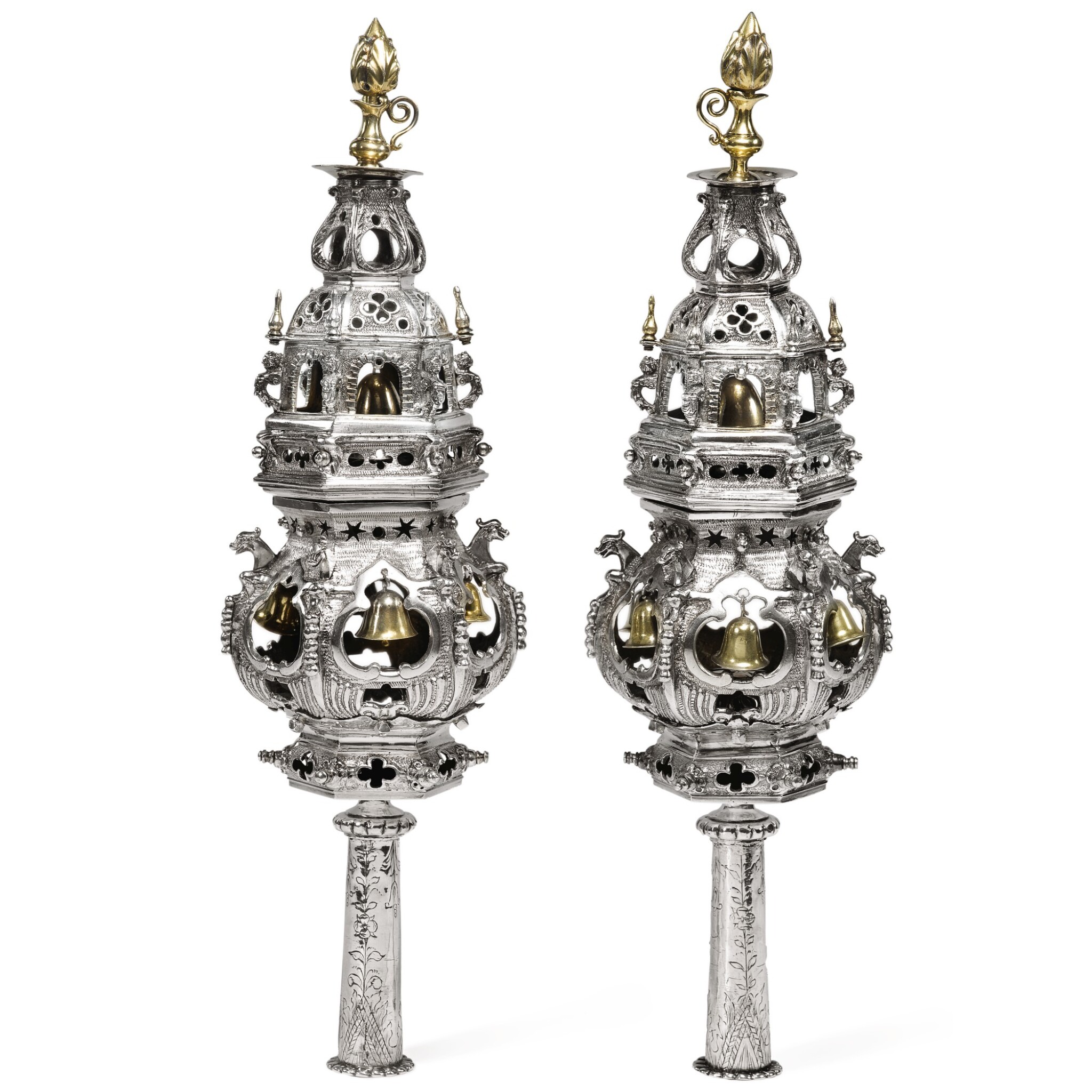 The first finial with two bells by Abraham Benelisha, London c. 1900, eight bells missing, minor repairs throughout, projecting monster heads now with lead solder, the laver and basins at top possibly of a later date. The second with seven bells missing, three being circa 1800, one circa 1900, one Dutch 19th century.

This pair is thought to be among the earliest examples of the form, contemporaneous with a pair by Jan van den Velde, Amsterdam 1650, formerly in the Gross Collection in Israel. Similar pairs can be found in museum collections including a 1705 pair at the Jewish Museum, New York, documented in Rafi Grafman, Crowning Glory: Silver Torah Ornaments of the Jewish Museum, New York, no. 383 p. 235. Another pair from 1705 is by Pieter van Hoven in the Jewish Historical Museum, Amsterdam, inv.no.B0102, see Gifts From the Heart no. 12 p. 150-151, and a pair is in the Jewish Museum, London, JM102, unmarked but described as Netherlands (probably Amsterdam,) c. 1695, see Treasures of Jewish Heritage, The Jewish Museum London, p. 77. The form was also found in Hamburg, as seen in a pair by Jurgen Richels, 1688-9, sold by Sotheby's June 5, 2019, lot 79.

It is thought that Jewish migrants came to the Netherlands region as early as the Roman era. They existed mostly in small numbers and were often persecuted or expelled from their various homes until the Reformation era. At this time, the Dutch turned towards Protestantism, suffering their own persecution from Catholics and therefore grew more tolerant of other non-Catholics by extension. The Governor General, Archduke Mattais (future Holy Roman Emperor) established a religious peace between Protestants and Catholics, which was secured in the 1579 Union of Utrecht, unifying the northern provinces of the Netherlands. In 1581, this region declared independence from their Catholic Spanish King, Philip II. These events attracted the attention of Jews struggling to survive in post-Inquisition Portugal, where many had been forced to convert to Christianity but lived as conversos, who practiced their Judaism in secret. Converts were never without scrutiny or considered suspicious and continued to be persecuted. They sought refuge in the Netherlands as a relatively safe haven.

The Jewish community in Rotterdam dates to August 26, 1610 when economic interests led the mayors, magistrates and councilmen of the city to write a charter stating "let it be known that in order to promote trade and commerce in this city, we find it useful to invite the merchants of the Portuguese nation to come and reside in this named city by extending several privileges and freedoms . . . ”. They were permitted to build a synagogue and practice freely as long as at least thirty families were to settle there and they would not attempt to convert Christians to Judaism. This charter made Rotterdam among the most tolerant cities towards Jews, even more so than Amsterdam where they had not been protected. However, these provisions lasted just until 1612 when the charter was challenged by the Church. Consequently, most Jews moved to Amsterdam where they were afforded more religious freedoms in 1619.

The Jews who remained in Rotterdam worshipped quietly in the attic of a private home. In 1647 Jews were given the same rights as those in Amsterdam, and a new wave of Portuguese Jews moved to the city. The population was largely involved in international trade, and were likely artisans and physicians, as they were in Amsterdam. Most prominently, newcomers included brothers Abraham and David de Pinto, who are considered the founders of Rotterdam's Jewish community. A synagogue and yeshiva (Jewish school) was set up in Abraham de Pinto’s home. The yeshiva remained there until after his death, and moved to Amsterdam in 1669. The de la Penha family of merchants and ship-owners became leaders in their society, and the Sephardic Portuguese community as a whole flourished. As it grew in the 17th century, the synagogue moved twice and three Jewish cemeteries were established.

The mid-17th century saw an influx of Ashkenazic Jews from Germany and Poland. They came fleeing religious persecution and the Thirty Years War, arriving poor and less accepted than the affluent Sephardic community. They were kept impoverished by laws preventing Jews from joining the guilds and requiring them to stop selling merchandise after 1pm in the market. Despite their economic hardships, they were able to grow and establish their own synagogue and cemetery by the 1670s. By 1736, the Sephardic Portuguese community in Rotterdam dwindled and the remaining members joined with the Ashkenazic community, which continued to thrive in numbers. They built new synagogues having outgrown their old ones, opened a kosher butcher shop, founded a school, repeatedly expanded their cemetery and established others. By the end of the 18th century, Rotterdam had the second largest Jewish community after Amsterdam.

When the French Revolution landed on Dutch shores at the end of the century, the French brought with them their principles of freedom and equality, which were adopted by the Dutch. On September 2, 1796, the Jewish people were emancipated upon the National Convention’s declaration: "No Jew shall be excluded from rights or advantages which are associated with citizenship in the Batavian Republic, and which he may desire to enjoy." The changes were slow to follow, but over time, the Jewish community of Rotterdam grew steadily and integrated themselves into all parts of society.