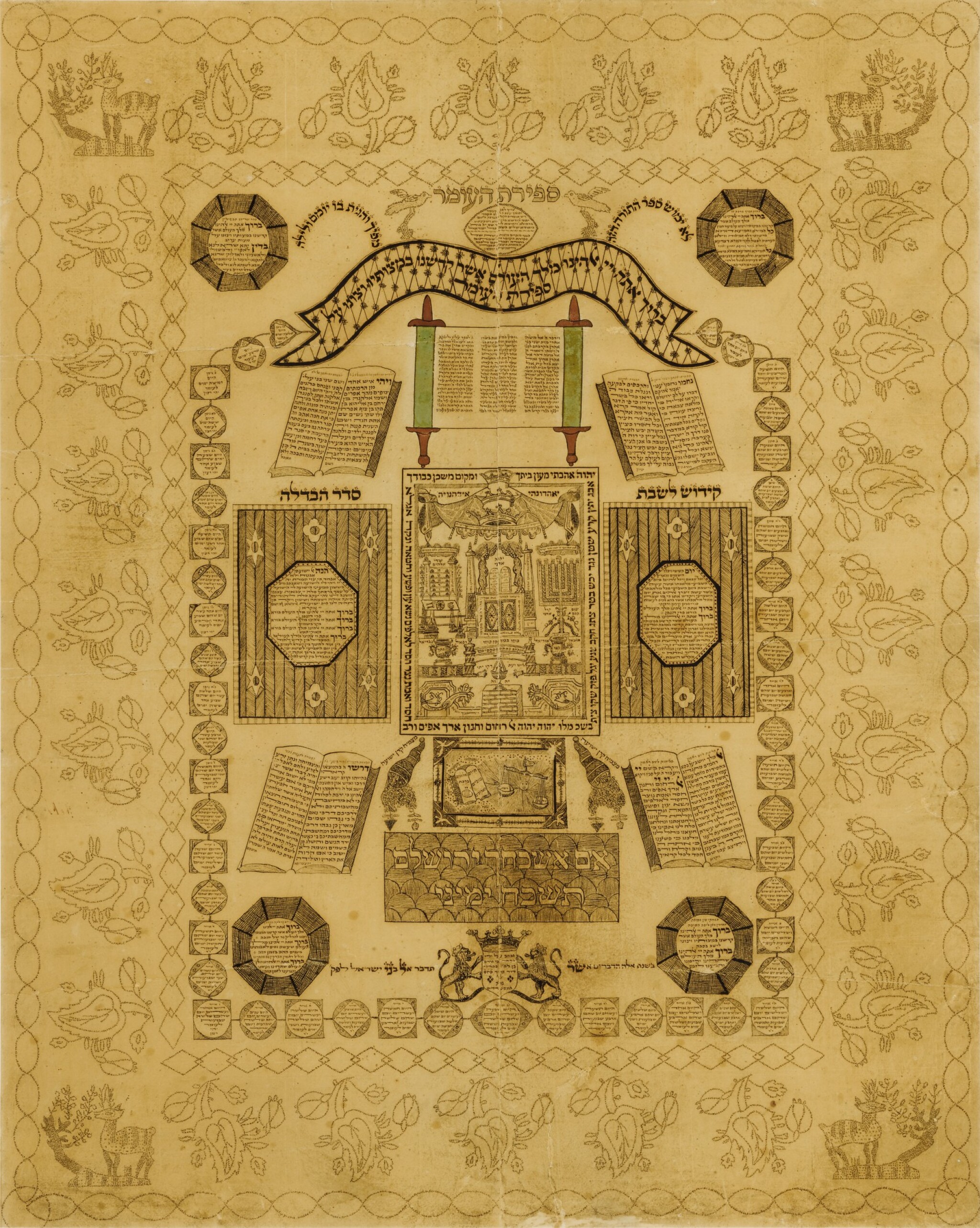 Ink on paper (30 x 24 in.; 762 x 610 mm); written in Ashkenazic square and semi-cursive Hebrew scripts in brown ink. Small, scattered spots; light stains; a few creases, with minor losses along the center folds. Matted, glazed, and framed; not examined outside of the frame.

A tour de force of the scribal arts.

The scribal practice of employing micrography, or minuscule script, to create abstract shapes or figurative designs has been current among Jews for over a millennium. Much of the earliest micrography is found in biblical codices where scribes fashioned the Masorah (a detailed set of textual traditions) into floral and intricate geometric motifs. With the advent of printing and the ensuing decline in manuscript production, scribes continued to practice artistic micrography in other formats, including marriage contracts and decorative plaques.

This outstanding example of the micrographer’s art is a calendar created to help fulfill the commandment to enumerate each of the forty-nine days in the seven-week period between Passover and Shavuot, known as the Omer. The present Omer calendar, meticulously crafted with extraordinary precision, ranks among the finest specimens of this genre. The delicate micrographic interlacing forms an outer border of linked ovals and an inner border of interlocking diamonds. Between these borders are graceful floral motifs, and in each corner, a grazing deer. These elements are all made up of tiny letters that comprise the entirety of the Five Scrolls (Song of Songs, Ruth, Lamentations, Ecclesiastes, and Esther).

Within the borders, forty-nine alternating squares and circles, forming a chain, represent the forty-nine days of the Omer. The elaborate central panel features detailed images of the holy implements of the Temple in Jerusalem along with amuletic kabbalistic formulae and the names of protective angels. The blessing recited each night when counting the new day of the Omer is prominently inscribed in a decorative ribbonlike form at the top. Beneath, a variety of additional blessings and ritual texts—including the Kiddush for the onset of the Sabbath, the Havdalah for the close of the Sabbath, blessings recited in a sukkah and before lighting the Hanukkah candles, and biblical readings for fast days—ensure that in some form or fashion this plaque can be associated with the observance of each of the Jewish feast and fast days on the calendar, making it a map of virtually the entire Jewish year.

This Omer calendar is signed by the scribe-artist Zevi Hirsch ben David in a crowned shield held aloft by two lions rampant, and can be firmly dated to [5]590 (1830) via a chronogram penned on either side of the shield. The talented Zevi Hirsch is known to have created an extraordinary group of eight magnificent micrographic plaques that were all produced in the same virtuosic style. From the four micrographic masterpieces that Zevi Hirsch dated, we can deduce that this remarkable artisan was active in Amsterdam between 1815 and 1830, making the present Omer calendar his last, and most accomplished, work. Six of the remaining plaques are also Omer calendars, and the seventh is a presentation piece written in honor of the coronation of Willem I, King of the Netherlands. Zevi Hirsch was justifiably proud of his artistic accomplishments, and on four of his plaques (including the present example) he included prominent images of deer in each of the corners as visual allusions to his names, the Hebrew (Zevi) and Yiddish (Hirsch) words for a deer. This, however, is his only known plaque where in addition to the imagery of the deer, Zevi Hirsch also signed his name boldly on the document itself.