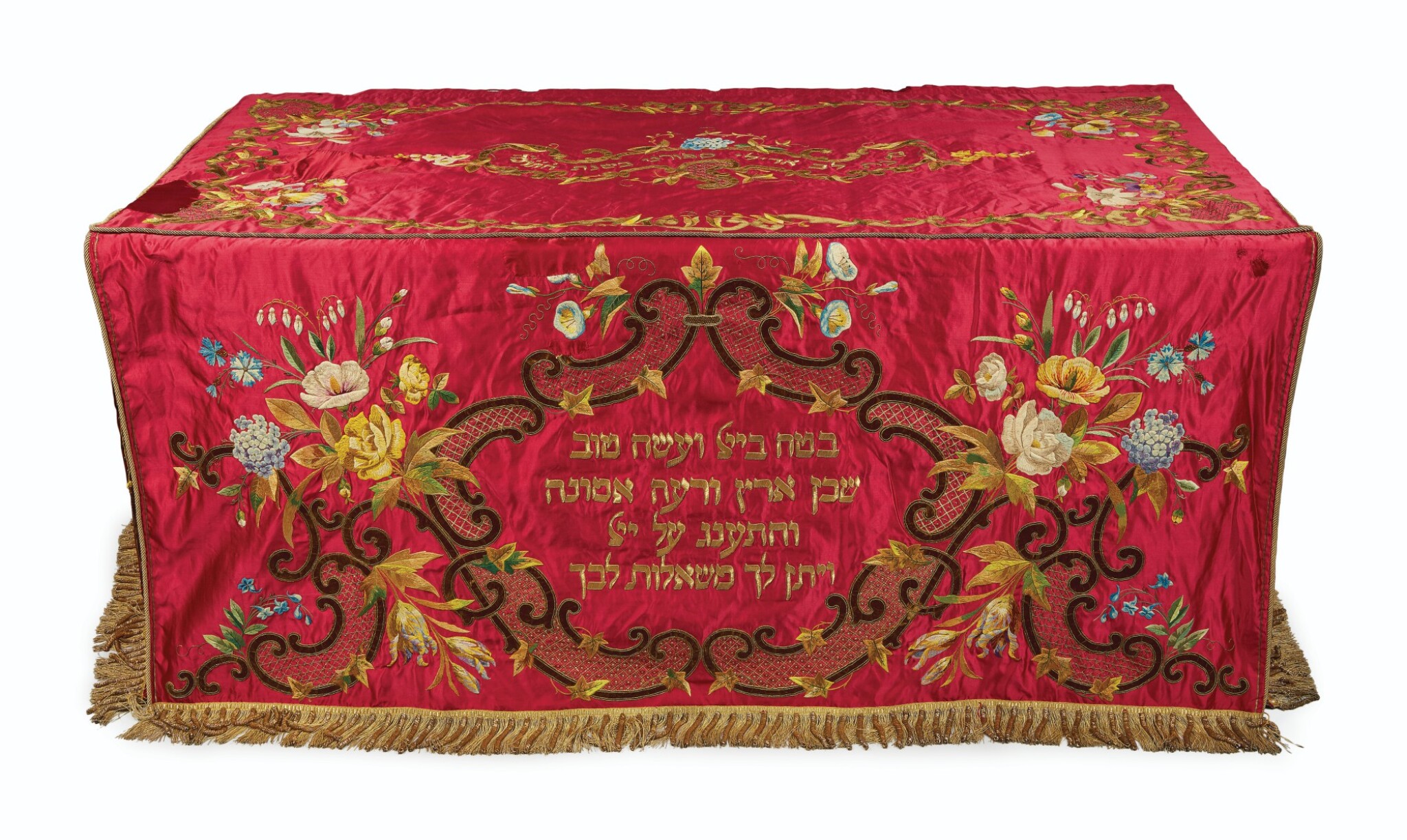 This splendid textile was created to cover a reader’s desk (bimah or teivah), a platform in the synagogue where the Torah is read and from which the prayers are recited. The center of the front panel features a Hebrew inscription embroidered in gold thread comprising two verses from Psalms: “Trust in God and do good, abide in the land and remain loyal. Seek the favor of God, and He will grant you the desires of your heart” (Ps. 37:3-4). On the top panel, a second, even more prominently placed inscription informs us that this textile was “donated by Adele Sforni in the year 5625 [1865].” Adele Sforni was a member of a distinguished Jewish family from Mantua, and when she married Saul Da Zara in 1840, no fewer than three booklets of celebratory poems were published in honor of their wedding.

We learn from a remarkable source that this magnificent textile was not only donated by Adele to the Scuola Grande (Great Synagogue) in Mantua in 1865 but was actually her very own handiwork. In 1866, two pages were devoted to a description of this reader’s desk cover in the Italian periodical L’educatore israelita: giornale mensile per la storia e lo spirito del giudaismo (The Israelite Educator: Monthly Newspaper for the History and Spirit of Judaism). The author praises Adele for “her year of constant labor to create and execute the perfect embroidery of a lavish textile that covers the teivah where religious functions are celebrated, and in which richness, elegance, and good taste compete in a truly admirable way.” The writer continues with a detailed and careful description of the rich embroidery of the textile and adds that “we hope that this noble example will find generous imitators, and that our ladies do not refuse to use the work of their hands to embellish the sacred appurtenances of our synagogues.”

At least six synagogues were established in Mantua over the course of the sixteenth century. Of these, three followed the Italian rite: the Scuola Grande (built in 1537), the Scuola Norsa-Torrazzo (founded in 1513), and the Scuola Cases (founded in 1590). The remaining three followed the German rite: the Scuola Beccaria (founded in 1595 on top of a slaughterhouse and named after it), the Scuola Porto (founded in 1540), and the Scuola Ostiglia (founded in 1558). The Jewish quarter in Mantua extended through the heart of the city, and so, in 1904, this area was demolished. Of the original six synagogues, only the Norsa-Torrazzo still exists today, having been rebuilt in a different part of the city, at 13 Via Gilberto Govi. Many Jews living in Mantua left for Milan at the beginning of the twentieth century; the sumptuous furnishings and textiles of the other five synagogues were therefore scattered and can now be found in important museum and private collections around the world. This splendid cover for a reader’s desk is a precious object from one of the most important Jewish communities in Italy.