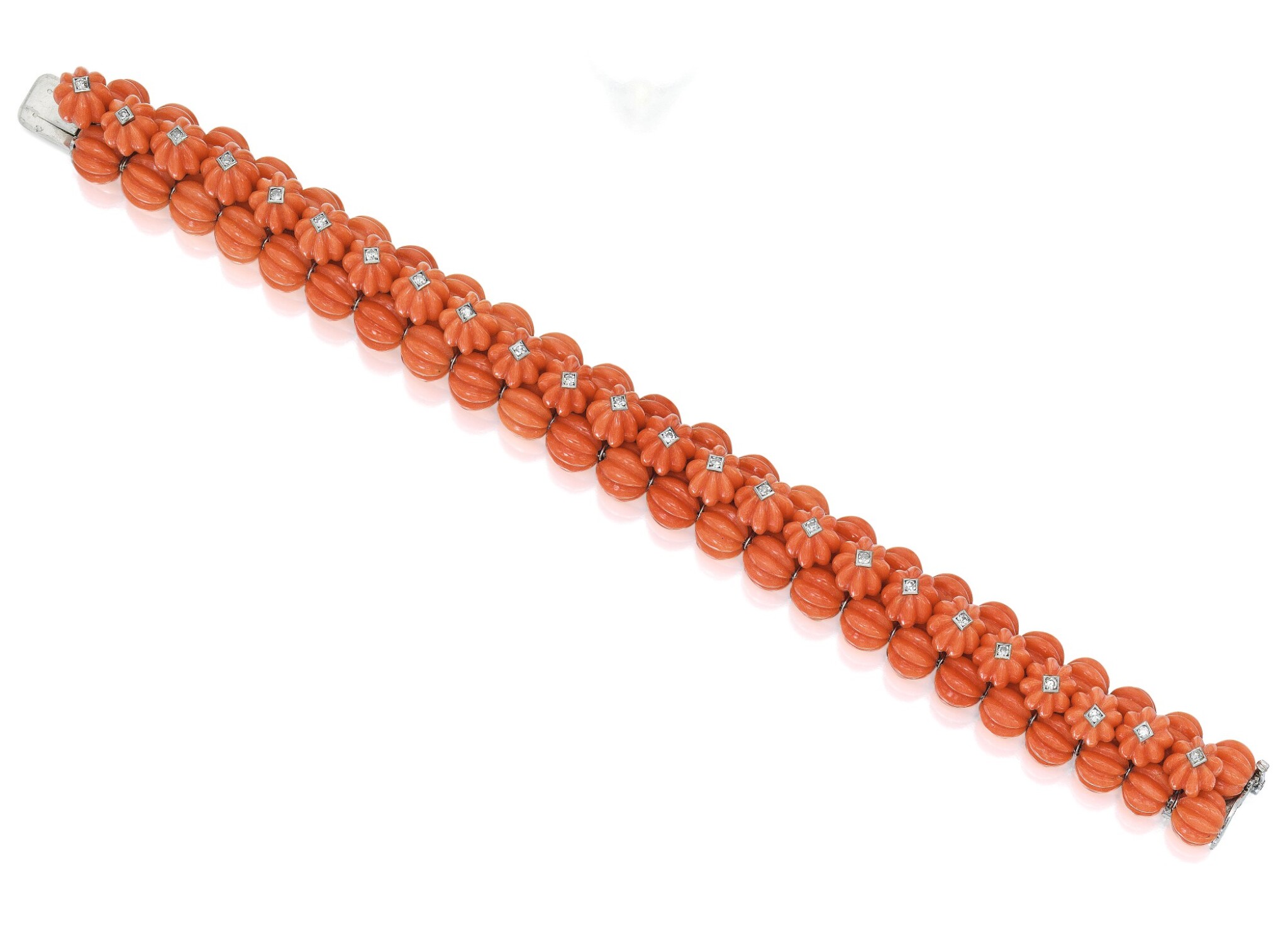 In very good condition, with light wear to the mounting, commensurate with age. French assay marks for platinum. The coral medium strongly reddish orange color, well-matched in overall good condition, some with light white mottling and a few with minor blemishes to the surface, visible under close inspection, well-matched for color. The diamonds estimated to weigh approximately 0.40 carat are approximately G-H color, VS clarity. Width of bracelet approximately ⅝ inch. Fitted with a safety clasp. Nicely flexible. Accompanied by a copy of a letter from Cartier to Madame Ganna Walska dated July 7, 1932. Please note this property cannot be shipped internationally due to endangered species materials.

Please note this property cannot be shipped internationally due to endangered species materials.

Illustrated in Ganna Walska: Portraits of an Era by Hania Tallmadge, page 44.

Madame Ganna Walska (1887-1984) lived in the limelight for many years as a singer and socialite. Her penchant for high fashion and jewelry was fed by the largesse of several wealthy husbands. What she didn’t do was wear the fashion of those around her, proclaiming herself “an enemy of the average.”

Although Madame Walska’s early career as a vocalist was sometimes rocky, she later enjoyed success in small auditoriums and concert halls across Europe and America. She appeared with Enrico Caruso in New York and also performed several times at Carnegie Hall. In addition, her devotion to theater arts was strong. When her husband, Harold McCormick, made her a gift of the Théâtre des Champs Elysées in Paris in 1923, she took up the new cause with vigor and passion. Through her management and a world class orchestra, the theater went on to host many premiers of modern music and dance. To help support her theater, Madame Walska entered into commerce by way of a perfume and cosmetics line. Unfortunately, the economy was on the verge of collapse and with the onset of the Great Depression, she was forced to abandon the enterprise.

Throughout her marriage to Harold McCormick, head of the International Harvester Company, Madame Walska maintained her primary residence in Paris where she spent most of her time, but she also maintained her New York apartment (with an eye to protecting her American passport). After her divorce from McCormick in 1931, she continued to live in Paris, as well as a chateau outside of Versailles. As the second war loomed, she fled to New York ahead of the advancing Nazi forces, financially contributing from afar Polish charitable organizations such as the I.J. Padarewski Invalid Fund and the Polish Red Cross.

As the war raged, Madame Walska sought a safe haven in Southern California. Her Montecito estate began to cast its spell over her, and her feeling of duty and stewardship spurred her to action. As with her other accomplishments, she created a garden that was anything but average.

Even though she was a petite 5’3” tall, Madame Walska was fond of wearing unique, and often large jewelry. Precious and semi-precious stones of all types were crafted into necklaces, bracelets, belts, and brooches for her. Even a few tiaras graced her coiffure as she appeared at the theater and other gala events during her lifetime. The houses of Cartier, Boucheron, and Suzanne Belperron were no stranger to her. She often actively participated in designing and redesigning historic jewels from the days of Napoleon, the Russian empire, and even some from former potentates in India. In 1971, she auctioned off many of these jewels and garnered the necessary funds to continue her visionary plans for Lotusland, which is now considered one of the top ten gardens in the world.

In that same spirit of generosity, a portion of the proceeds from this bracelet’s sale will likewise benefit the public charity that bears her name, Ganna Walska Lotusland.