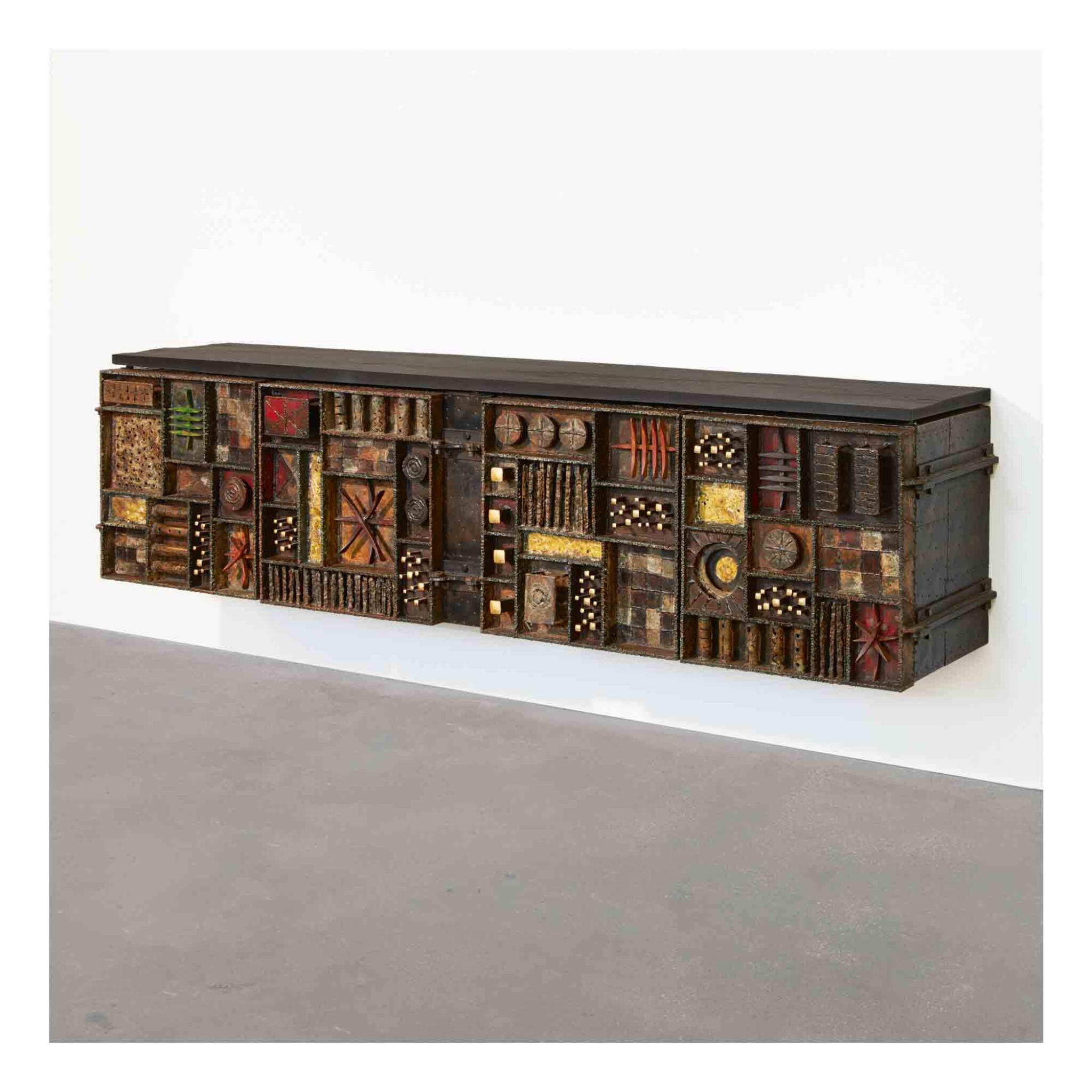 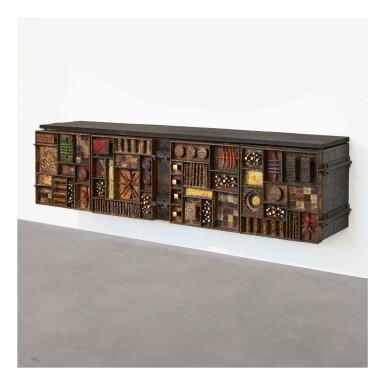 To request a condition report for this lot, please email Hannah.Poss@sothebys.com.

Gustave and Helen Manasse fell in love with Paul Evans’ work in 1967, or thereabouts. They encountered it in the best possible place: America House, on West 53rd Street in Manhattan, a retail operation with museum-quality standards. The sales venue of what was then the American Craftsmen’s Council, the shop had been founded in October 1940; it was the earliest, and in some ways the purest, expression of Aileen Osborn Webb’s intentions in setting up the Council. She saw it as a way of presenting the best in modern craft to the public, and deriving support for makers in return.

Even in that elevated context, the work of Evans (who was then in partnership with Philip Powell) would have stood out for its scale and presence. His furniture was also the perfect expression of Webb’s guiding philosophy. Evans was not an impractical artist, but a true production maker. He proved that it was possible to make great design by hand, while still being a successful entrepreneur.

The Manasses did not actually buy a piece of Evans’ work when they first saw it—they simply did not feel they could afford the purchase. But a decade later, when their twenty-fifth anniversary came around, they decided it was time. (It was an exciting time in their lives, as they were just in the process of taking ownership of the Le Figaro Café, the legendary bohemian fixture, already famous as a hangout for Bob Dylan, Jack Kerouac, and Lenny Bruce.) So up to 53rd Street they went—only to discover that America House was long gone. It had closed in 1971.

In those pre-internet days, that might have been that. They had no notion of how they might locate Evans or his work. But here fate stepped in, for not long after, the Manasses happened to visit an open house. The owners, on the verge of moving out, happened to have an Evans dining set. The Manasses recognized the furniture immediately, and asked where it had come from. The answer: New Hope, Pennsylvania.

That was enough for Gustave and Helen to take to the road. When they got to New Hope, they simply asked around until they were directed to Evans’ shop, and there, miraculously, was a sideboard very like the one they had admired so many years previously. They bought it on the spot. Evans sent the piece to their home in Glen Cove, Long Island, along with a team of installers, who bolted it to the living room wall. It has remained in that spot ever since.

The sideboard served the Manasse family faithfully, holding their silverware and table linen. Helen and Gustave’s son Jon, a musician, recalls how he marveled as a child at the “melodic but percussive” sounds it could make as he tapped it here and there with his fingers. He would occasionally slip a door off its hinges, to show his friends how extremely heavy it was. But it was Helen who perhaps became most familiar with the design; for nearly forty years, she did her yoga looking right at it.1

The Manasses’ story says a lot about Evans and his context. Many of his clients were people just like them: not wealthy patrons or art collectors, but middle-class folks who wanted something special for their home. This intended audience helps to explain some of the practical and aesthetic qualities of his work. Evans arrived at an ideal middle ground between customization and serial production. In the language of the time, he was a true “designer-craftsman,” achieving some economy of scale through the selective repetition of forms and techniques, but also varying each piece, ensuring it had handmade uniqueness. He trusted the artisans on his team to implement this vision—foremost among them Dorsey Reading, who served as Evans’ lead metalworker for decades.2 Reading describes their process as an ongoing, improvisatory variation on set themes. When Evans was first developing a line, he would hand over evocative sketches on onionskin paper, which conveyed overall composition and imagery while leaving the exact details open to the makers’ discretion. Once mastered, each idiom could generate endless variety.

Evans also achieved a balance between avant garde inspiration and pop sensibility. Looking across the range of his work, we can see the impressive scope of his fine art sources, among them Cubism, Abstract Expressionism, and Op Art.3 The Sculpture-Front series compares closely to the contemporaneous work of Louise Nevelson, and also has clear connections to the expressionist forged metal sculpture of the time, by artists like David Smith, Richard Stankiewicz, Harry Bertoia, and Claire Falkenstein. Commercial design vocabulary from the period is equally pertinent: starbursts, offbeat patterns, and vivid polychrome like that seen on the sideboard can be found all over the fashions, films, and album covers of the Swinging Sixties.

Undergirding all this au courant visual invention is an impressive infrastructure of craftsmanship. Atop a wooden carcass—likely fabricated by Evans’ longtime woodworker, Elmer Case—are mounted heavy doors in steel, subdivided into compartments.4 The small-scale sculptures that populate these niches, and selected portions of the rest of the cabinet’s surface, are variously polished and treated using heat and acid (the work of the shop’s patina specialist, Robert Thomas), imparting a range of reflectivity, color and texture. The cumulative effect is painterly, but also vigorously assertive in its three-dimensional materiality. A slab of slate rests atop the whole cabinet, providing a useful surface and also a certain touch of historical resonance, recalling the rooflines of New Hope.

Evans produced many different forms in the Sculpture Front series, both horizontal and vertical in orientation, often standing on plinths. Arguably, though, it is in this wall-mounted format that the idiom has the greatest impact. The massive sideboard projects into space, hovering there majestically, its intricate details adding up to an object of architectonic power, at once modernist and Byzantine, secular and ritualistic. Was this a lot to bring into a suburban living room? Absolutely. And that is exactly what Paul Evans had in mind: everyone should have a little grandeur if they wanted. And he was just the man to provide it.

GLENN ADAMSON is a curator and writer based in New York. His recent publications include Fewer Better Things: The Hidden Wisdom of Objects (2018); The Invention of Craft (2013); Postmodernism: Style and Subversion (2011); The Craft Reader (2010); and Thinking Through Craft (2007). His newest book, Craft: An American History, will be published in January 2021.