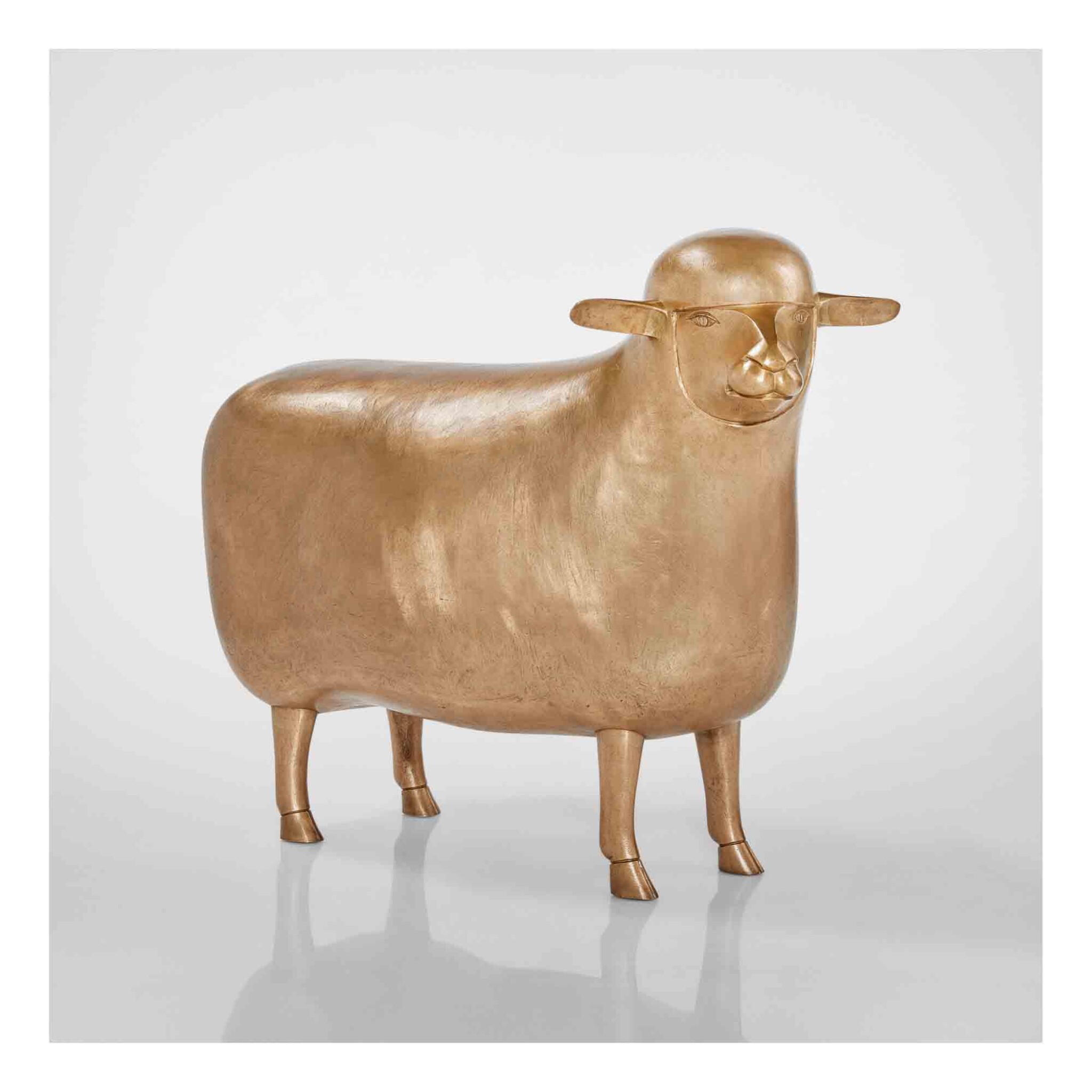 number 5 from an edition of 8 plus 4 artist's proofs

monogrammed FXL, numbered 5/8 A and with the foundry's impressed mark

Overall in very good condition. This single “Grand Mouton de Peter” is an iconic and highly regarded gilt bronze iteration of the artist’s popular sheep form, and presents with a stunning vibrant gilt patina when viewed in person. The surface presents with very subtle variations in tonality and patina application which are inherent to the making and enhance the handmade quality of the work. The sheep was executed with a subtle textural thatched surface, evoking the texture of wool. The bronze surfaces with some minor surface irregularities and pinholes inherent in the making and not visually distracting. The bronze with very few minute spots of oxidation to the thatched and recessed areas consistent with age and only visible upon close inspection. An exceptionally dynamic model which presents with strong sculptural presence. When viewed in person this Mouton has a lot of charm and character and is wonderfully stylized and expressive. This offering provides Lalanne collectors with the opportunity to acquire a coveted golden sheep in beautifully preserved original condition.

﻿﻿﻿﻿﻿﻿﻿﻿﻿﻿﻿﻿﻿﻿﻿﻿﻿﻿﻿﻿In response to your inquiry, we are pleased to provide you with a general report of the condition of the property described above. Since we are not professional conservators or restorers, we urge you to consult with a restorer or conservator of your choice who will be better able to provide a detailed, professional report. Prospective buyers should inspect each lot to satisfy themselves as to condition and must understand that any statement made by Sotheby's is merely a subjective qualified opinion.

The concept behind the present Grand Mouton de Peter, a spectacular and recent iteration of a career-defining leitmotif for François-Xavier Lalanne, can be traced back to the sculptor’s friendship with Peter Marino. The American designer and architect had been a passionate collector of Lalanne’s work for many years prior to their collaboration in the creation of a new sheep series in 2004, which the sculptor eventually named after him. The series was conceived as a herd, each edition being comprised of three different forms: one ewe, one ram facing left, and one ram facing forward—the present model.

The Grands Moutons de Peter (“Peter’s Grand Sheep”), as they were called, were not only named for Marino, they are the product of his creative influence. When François-Xavier asked him, “What could I make for you that is truly special?”, he responded that since childhood he had always been fascinated with the story of Jason and the Golden Fleece from Greek mythology. He had a clear picture in his mind of a full flock of sheep with shimmering bodies mirroring the golden-woolled fleece of the mythological creatures that filled his imagination. Lalanne was delighted with the idea and said he would make them, executed entirely in gilt bronze, and that they would be named for Marino. The project, initiated in 2004, took several years for Lalanne to complete, and the eighth edition was not executed until 2007.

The present offering of an ewe from the series displays the expressive and dynamic features characteristic of the group, and represents the culmination of decades of continuous exploration and refinement of what is arguably Lalanne’s most iconic form. A complete flock of Grands Moutons, including an iteration of the present model, debuted at Sotheby’s in 2019. Last July, a ram from the series was offered and sold for a record price. The present Grand Mouton de Peter thus provides a fantastic opportunity for collectors and François-Xavier Lalanne connoisseurs to acquire a work from this rare and esteemed series.