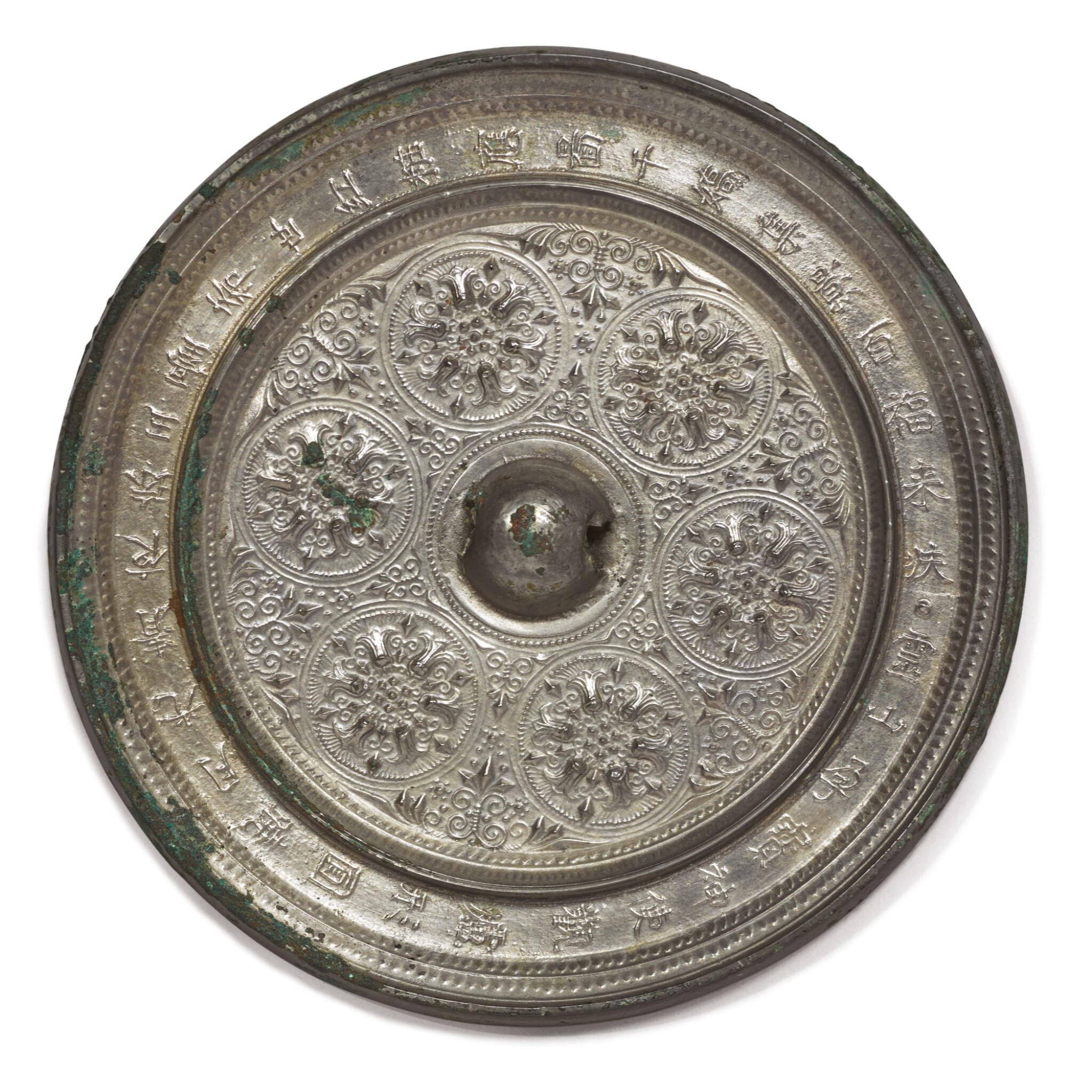 the pierced central knob encircled by a crisply cast garland of flowers, the outer field with six floral bouquet roundels divided by foliate scrollwork, enclosed on the outer border by a poem in the four-character pianwen style eulogizing the mirror, the silvered surface with traces of green encrustation; together with an exhibition catalogue, Ancient Bronze Mirrors from the Shanghai Museum, Shanghai Museum, Shanghai, 2005 (2)

The center has an approx. 6 cm long fine crack. Otherwise, the mirror is in overall good condition with some age-appropriate wear and minor casting imperfections.

The present lot belongs to a small group of bronze mirrors cast with the same design of flower roundels and inscribed with various poems in the four-character pianwen style. See, for examples, a closely related mirror, but of a larger size and inscribed with a different poem, in the Shanghai Museum, Shanghai, exhibited in Ancient Bronze Mirrors from the Shanghai Museum, Shanghai Museum, Shanghai, 2005, cat. no. 71(fig. 1); and another published in Shen Congwen, ed., Tang Song tongjing [Bronze mirrors from the Tang and Song dynasties], Beijing, 1958, pl. 9. Compare also a very similar mirror, but with a chevron border around the rim, from the Carter Collection, included in the exhibition Circles of Reflection. The Carter Collection of Chinese Bronze Mirrors, The Cleveland Museum of Art, Cleveland, 2000, cat. no. 57; and another exhibited in Bronze Mirrors from Sui to Tang Dynasty, Uragami Sokyu-do, Tokyo, 2010, cat. no. 5; the third with a ‘classic scroll’ border, in the National Palace Museum, Taipei, exhibited in Special Exhibition of Bronze Mirrors in the National Palace Museum, National Palace Museum, Taipei, 1986, pl. 67. For auctioned examples, see one sold in these rooms, 31st March-1st April 2005, lot 172; another formerly in the collections of A.W. Bahr and Robert H. Ellsworth, sold at Christie’s New York, 22nd March 2012, lot 1439; and the third cast with a poem in seal script, from the collection of Raymond A. Bidwell and the Springfield Museums, Springfield, sold at Christie’s New York, 21st-22nd March 2013, lot 1149.