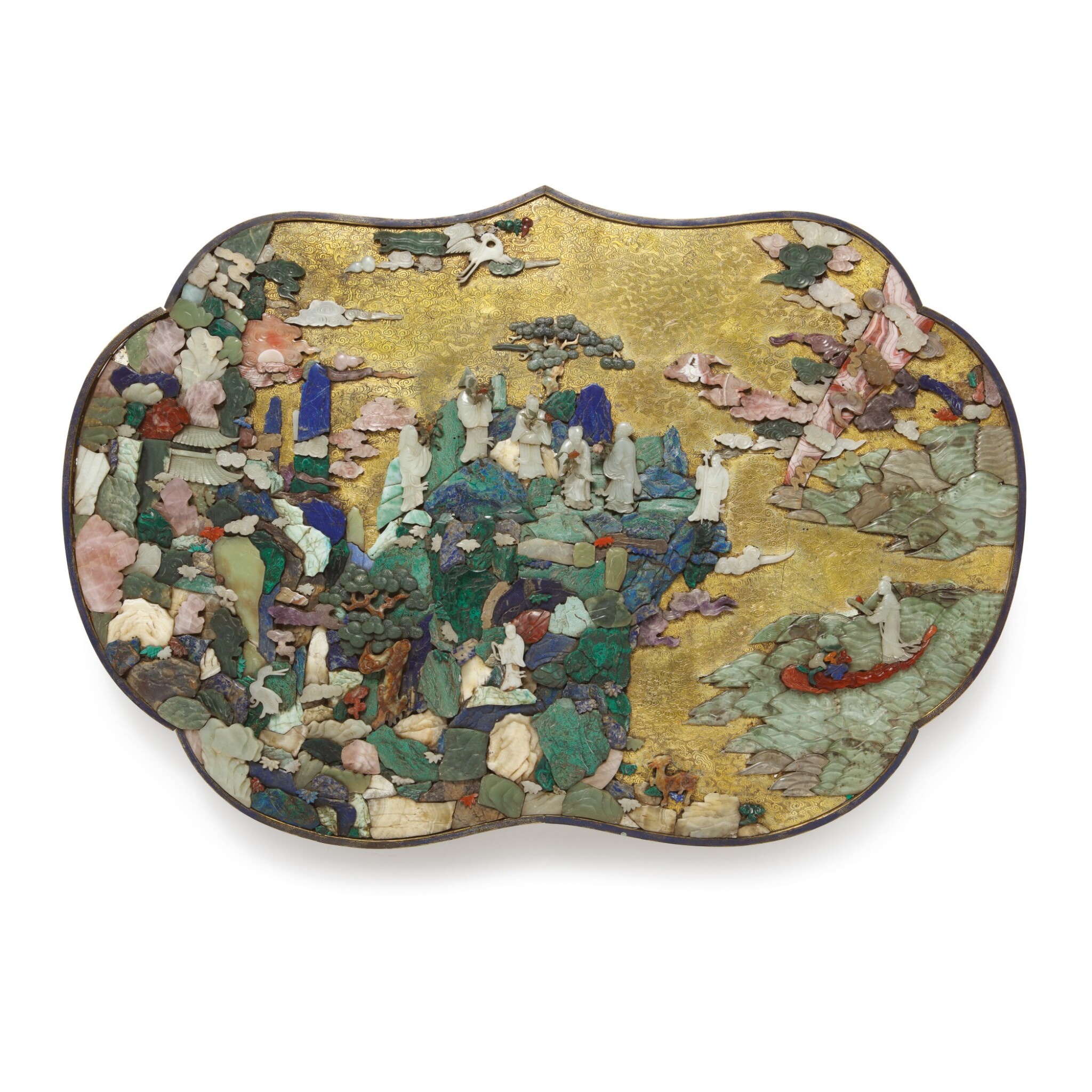 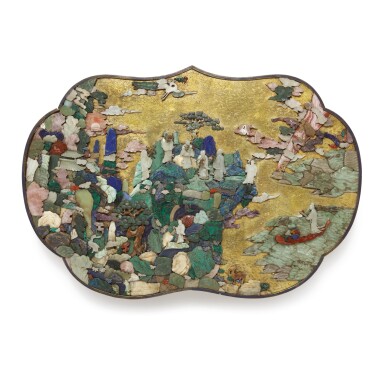 lavishly and colorfully inlaid with a variety of hardstones including, jade, jadeite, lapis lazuli, rose quartz, agate, malachite and amethyst, artfully arranged depicting a paradisiacal gathering of Daoist immortals, several standing atop a jagged mountain peak bearing silk-wrapped wire, jade and hardstone bouquets, another figure trekking up the hillside, and one navigating a gnarled wood raft through rolling waves towards the others, amidst rockwork studded with pine trees, numerous sprigs of lingzhi, darting and perching crane, and a grazing deer, all against a gilt-metal ground chased with densely scrolling clouds and enclosed within a narrow keyfret border of blue cloisonné enamel

The panel with some losses, some consolidation and some replacements to the decoration. The gilt bronze panel with some lines that may be consolidated cracks but may also have been previously incorporated into the composition. Several stones with small drilled apertures to secure elements now missing. There is expected wear and chips and nicks along edges and extremities. Please note that this panel was not examined outside of the mounted table format.

The lavish use of semi-precious stones on this panel exemplifies the opulence of the Qianlong Emperor's taste and the remarkable lapidary skills and materials available during his reign. While hardwood panels inlaid intermittently with hardstones are known, the density of the materials built up on this panel is particularly rare and striking. Layer upon layer of hardstones including lapis lazuli, jade, malachite and tourmaline and the construction of such a piece would have required the collaboration of a number of departments within the Imperial Palace Workshops. Each piece is carefully fashioned and perfectly fitted together to create a harmonious and otherworldly scene. An added sense of luxurious ethereality is created by the gilded background incised with scrolling clouds, which enhances the multiple hues of the hardstones.

Often made in pairs, wall panels adorned the numerous private halls built under the direction of the Qianlong Emperor. The pair to the present panel was sold alongside the present, amongst numerous other imperial items, from the collection of Lee Van Ching (Li Wenqing) at American Art Galleries, 14th February 1917, lot 216 (fig. 1). The present scene depicts the Eight Daoist Immortals on the Kunlun Mountains, the dwelling place of Xiwangmu and her orchard of 3,600 peach trees of immortality. Holding branches of flowers and lingzhi, the Immortals appear to be waiting with gifts to bestow upon Xiwangmu in celebration of her birthday. No other closely related panel appears to have been published which attests to the importance and distinction of the present.

Similarly sumptuously inlaid panels are known from the Qianlong period; however, these differ in style in that they generally attempt to recreate paintings or images in a naturalistic manner, as opposed to the abstracted style of the present. Perhaps the closest thematic and stylistic example is the pair of gilt-bronze inlaid luohan panels, from the collection of A.W. Bahr, which sold at American Art Association, 17th-19th January 1916, lot 500, and then remained in the collection of William Cobbett Skinner's family until being sold in these rooms, 11th September 2019, lot 667. Further lavish inlaid panels in the Palace Museum, Beijing, include one in the shape of a ruyi, depicting birds perched on flowering branches and a rectangular example illustrating a blossoming prunus tree, included in the exhibition The Emperor’s Private Paradise. Treasures from the Forbidden City, Peabody Essex Museum, Salem, 2010, cat. nos 25 and 22 respectively.