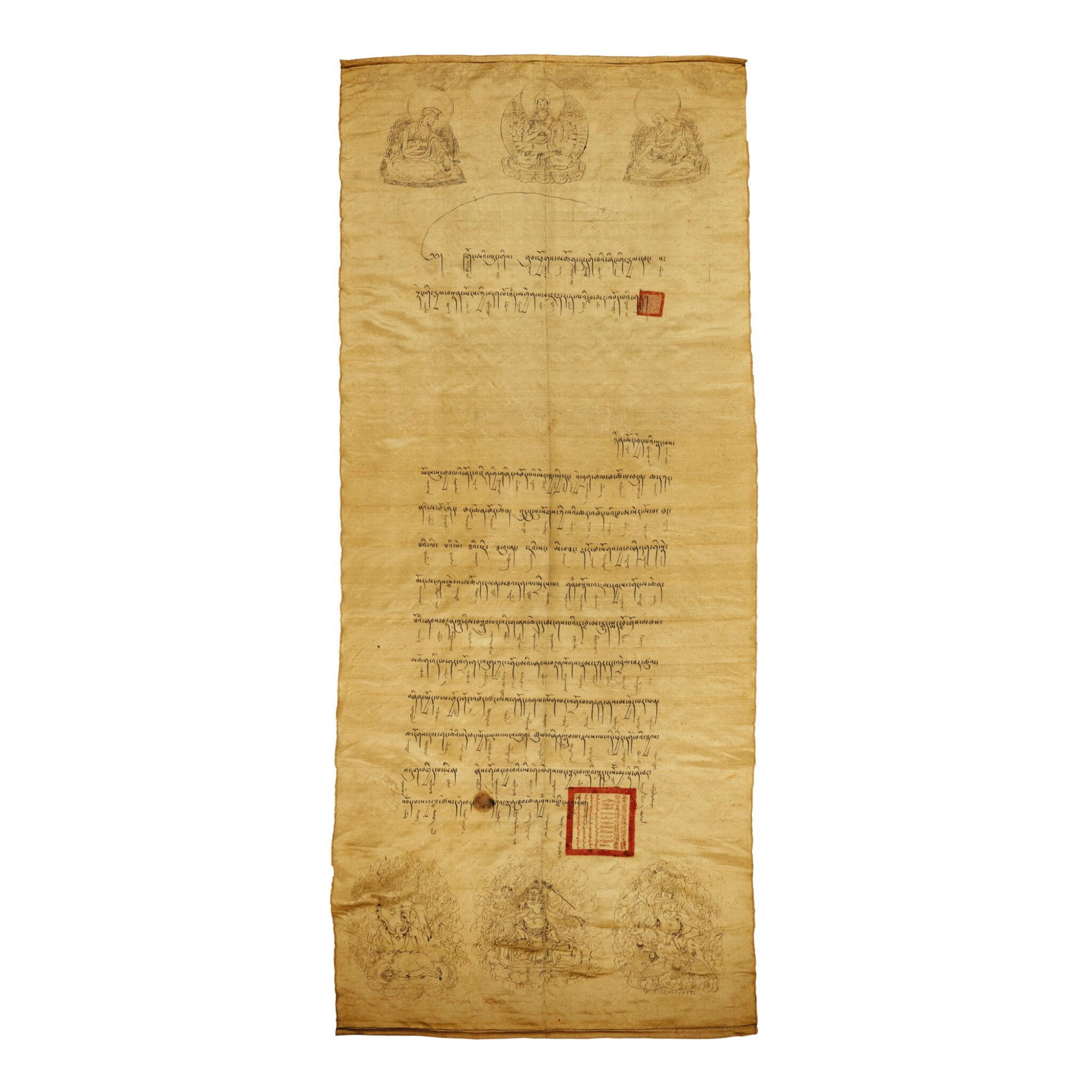 finely written in Tibetan and Mongolian, the Tibetan fluently calligraphed in drutsa script reading horizontally, accompanied by the Mongolian written beneath, impressed with two cinnabar seals, the gyatam seal in phags-pa script, the sertam seal in Chinese, Tibetan, Manchurian, and Mongolian translating to 'Seal of the Dalai Lama, the All-knowing Vajradhara, the Victorious One over the highest pure realms in the west, Holder of the complete teaching of the Buddha on earth', between finely painted depictions of Tsongkhapa flanked by the Fourth Panchen Lama Lobsang Chökyi Gyeltsen and the First Dalai Lama Gedun Drup in the upper register, and Yama Dharmarāja and his consort Cāmuṇḍa, Six-armed Mahākāla, and Śrimatī Pārvati Rājñī in the lower register, all against a yellow silk ground decorated with dragon roundels, beribboned precious emblems and cloud wisps

Foxing and creases visible throughout. Disintegration of the fabric to the top, middle and bottom. A water stain to the last row of the description.

Translation of the Tibetan:

A declaration by the one who, by order of the Emperor [of Qing], is called the Victorious One over the highest pure realms in the west, Holder of the complete teaching of the Buddha on earth, All-knowing Vajradhara, The Dalai Lama.

This is addressed to those inhabiting the regions of the earth embraced by the sun, to clerics and laymen in general and, in particular, to the seven tribes of Qalqa, to the yellow lamas who inhabit the areas of Cagar Naiman, Qosigu Qaracin, Ordos and so forth, to the Wang Beile, Beizi, Taiji, Tubunang, Jesang, Mizang, Darogha and so forth, to the leaders of civilian and military affairs, to all those entrusted with higher and lower responsibilities. With regard to the ritual service to be conducted [in those places] towards the longevity of the Heavenly-appointed Great [Qing] Emperor Mañjuśrī, Ta Lama Lodro Khechok from [the Lower Tantric College of] Gyume has been sent off from here for that purpose. Wherever the latter goes, all of you abovementioned must let happiness prevail by providing help and assistance, while refraining from unintentional harm of any kind, in order for the Emperor’s ritual service to be performed in the most appropriate and virtuous way. It is said that ‘He who seeks refuge in meritorious [deeds shall obtain] genuine accomplishments in this life and the next’. This explanatory letter has been issued in due form in the auspicious Earth-Bird Year [1729] – called saumya in the divine [Sanskrit] language [meaning] ‘gentle’ –from Ganden Thubchen Jampa Ling.

From the 17th century onwards, important edicts, proclamations, and letters within the Tibeto-Mongolic world were often handwritten on silk in ornate presentations. These official documents, like other diplomatic and legal documents written on paper, were authenticated by means of seal impressions. The present document is a bilingual travel permit issued by the Seventh Dalai Lama, Kelzang Gyatso (1708-1757), identified by the impression of his seal, which was bestowed by the Yongzheng emperor. The twenty-four character title from the seal, which translates to 'Dalai Lama, the All-knowing Vajradhara, the Victorious One over the highest pure realms in the west, Holder of the complete teaching of the Buddha on earth', was first conferred by the Shunzhi emperor in 1653 on the Fifth Dalai Lama, Ngawang Lobsang Gyatso (1617-1682), following his visit to the Qing court. A gold seal and a gold album were prepared by the imperial court to honor this sacred title of the revered religious leader of Tibet. The Yongzheng emperor followed this tradition and bestowed the same title, together with a new gold seal and a gold album to the Seventh Dalai Lama in the first year of the Yongzheng reign (1723). The gold seal of the Seventh Dalai Lama is now preserved in the Tibet Museum, Lhasa, and was included in the exhibition Xuyu cangzhen Xizang wenwu jinghua / Treasures from Snow Mountains. Gems of Tibetan Cultural Relics), Shanghai Museum, Shanghai, 2001, cat. no. 3.

This travel permit was granted to a monk named Ta Lama Lodro Khechok from the Lower Tantric College of Gyume in Lhasa. He was appointed by the Dalai Lama to travel to Mongolia to oversee ritual services for the stability of the Qing Emperor’s reign. It was addressed to the leaders and officials of different Mongol tribes to guarantee protection and ensure assistance to the bearer. The final part of the document provides the date and place of issuance, which are consistent with the records on the exile of the Seventh Dalai Lama to Eastern Tibet where he was to stay until 1736. According to Tibetan sources, the Seventh Dalai Lama arrived in Litang and Gartar from Chamdo on the 8th day of the 2nd month of the Earth-Bird year, where he was welcomed by a large crowd of clerics, religious dignitaries, and local officials. Thus, the travel permit was issued from the Kham monastery of Ganden Thubchen Jampa Ling at Litang, rather than from Lhasa as might be otherwise expected.

Related texts from Tibetan leaders during the Qing dynasty appear to be very rare. Surviving examples are highly treasured. Compare a very similar edict in the Asian Art Museum, San Francisco, included in the exhibition Tibet: Tradition & Change, The Albuquerque Museum, New Mexico, 1997, cat. no. 98. This edict, which is monolingual in Tibetan similarly written in a fine cursive script, records the request of the Dalai Lama for the three provinces of Kham, Ü, and Tsang to provide the centers of study at the three great monasteries of Sera, Drepung, and Ganden. The edict is inscribed with two seals in phags-pa script, one of which is the same gyatam seal found on the present lot. The text is dated to the Water-Tiger year from the Tibetan calendar, which corresponds to either the year 1723 or 1782. The issuer would either be the Seventh or the Eight Dalai Lama.

Sotheby's thanks Dr. Yannick Laurent for the translation and research of this lot.