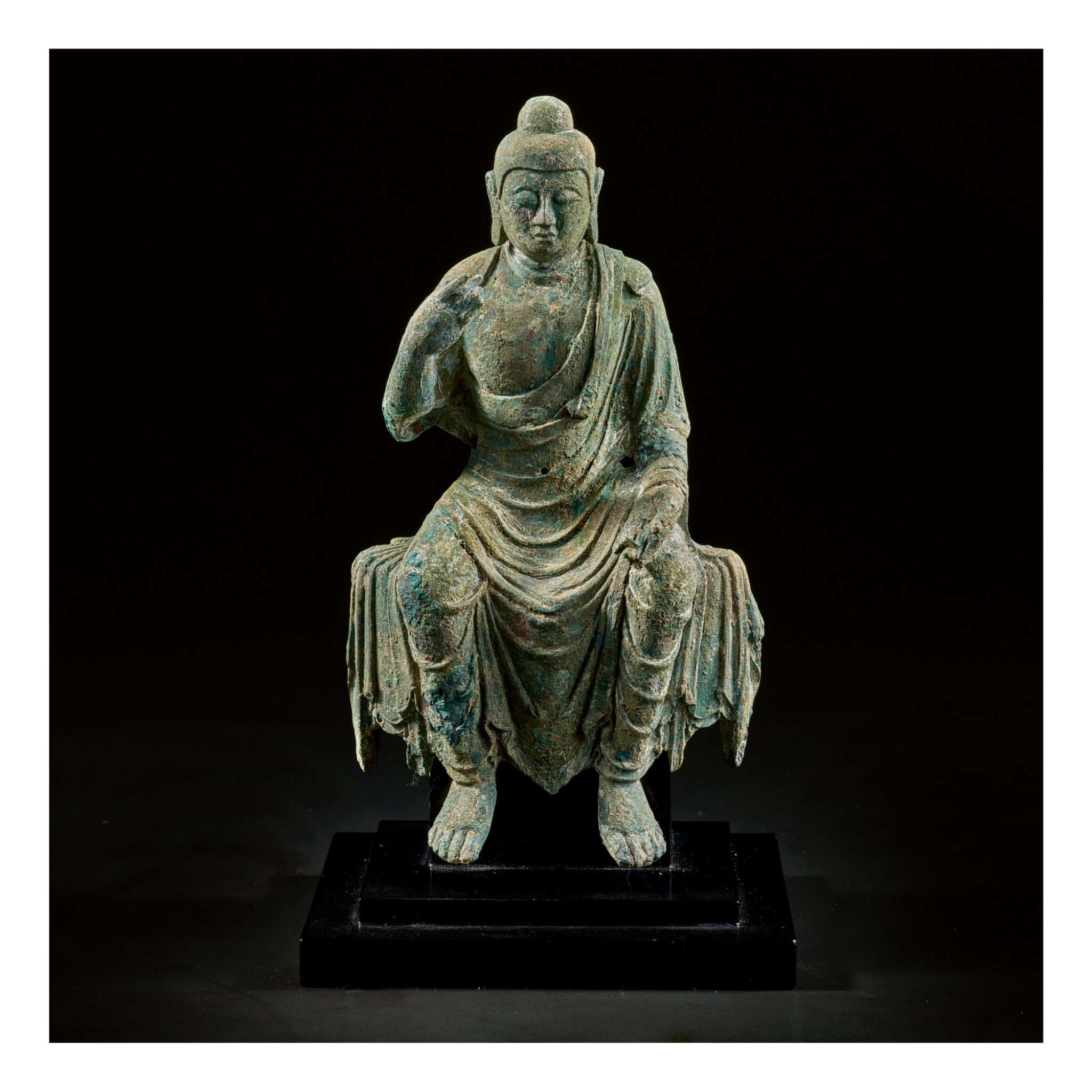 A BRONZE FIGURE OF BUDDHA

seated with the legs pendent over the seat, an ushnisha over a crisply cast hairline and facial features, the wide almond shaped eyes and aquiline nose above fleshy, full lips, the round face framed by pendulous ears, the body with a simple monk's robe covering both shoulders and partially exposing the chest, concentric pleats falling below to form a symmetrical hem above the large bare feet, the back with an aperture for a mandorla, modern stand, Japanese wood box (5)

With verdipatination throughout the surface and encrustations in areas; also with casting flaws including two small gaps to the front. There are small minor losses to the extremities including to the tips of drapery. An integral prong extends from the interior back to fit into the base.

The present figure clearly displays the influence of Gandharan sculpture aesthetics on Chinese Buddhist art. The treatment of the garment drapery, the positioning of the pendent legs, and even the style of the raised hand derives from Western precedents. See a gray schist Gandharan sculpture of a seated Buddha, with the legs pendent and similar garment drapery, preserved in the British Museum, London, attributed to the 2nd-3rd century, Kushan, illustrated in Wladimir Zwalf, A Catalogue of the Gandhāra Sculpture in the British Museum, London, 1996, pl. 30.

Compare a bronze seated figure similar to the present lot, attributed to the Tang period, illustrated in Saburo Matsubara, Chinese Buddhist Sculpture: A study based on bronze and stone statues other than works from cave temples, Tokyo, 1966, pl. 283a. See as well a limestone carved figure with similar treatment of the body position and garments, dated the third year of Chang'an corresponding to 703, illustrated in Arts of the Sui and Tang Dynasties, Osaka Municipal Museum, Osaka, 1975, cat. no. 3-32; as well as another limestone carving also dated the third year of Chang'an, from the collections of F. Brandt, P.W. Meister, and Dr. Ernst Hauswedell, then with C.T. Loo before entering the collection of Avery Brundage and subsequently the Asian Art Museum of San Francisco, illustrated in René-Yvon Lefebvre d’Argencé, Chinese, Korean, and Japanese Sculpture: The Avery Brundage Collection, Tokyo and New York, 1974, pl. 88.