PROPERTY FROM AN IMPORTANT COLLECTION 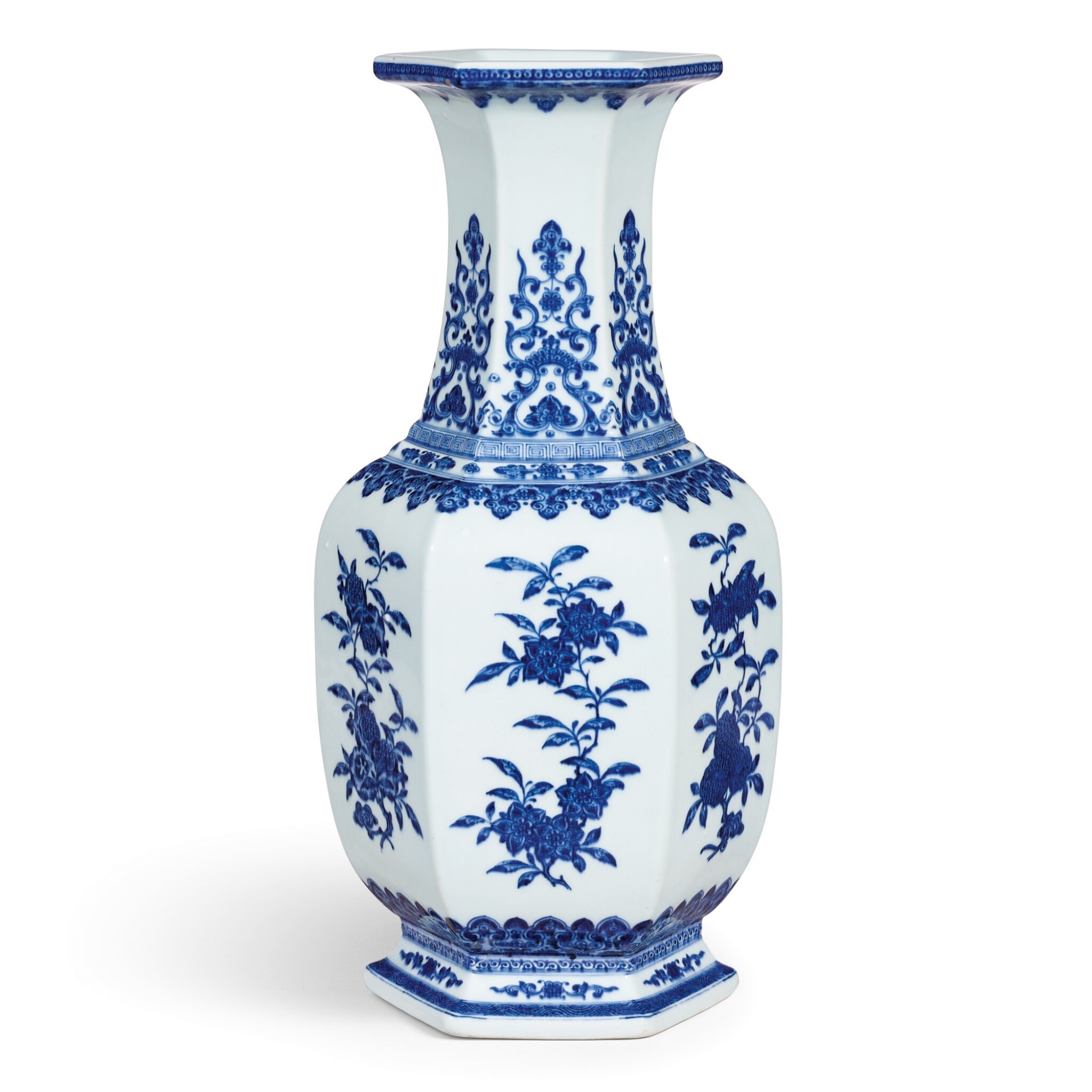 PROPERTY FROM AN IMPORTANT COLLECTION

SEAL MARK AND PERIOD OF QIANLONG

of hexagonal section, superbly painted in vibrant tones of cobalt blue enhanced by simulated ‘heaping and piling’, decorated around the sides with alternating fruiting and floral sprays issuing pomegranate, peach, peony, chrysanthemum, lychee and lotus growing amidst slender leafy branches, all within ruyi head borders, the waisted neck decorated with stylised foliate scrolls below further ruyi heads and a band of dots, the shoulder with raised bands decorated with keyfret and foliate sprays, the foot encircled by bands of scrollwork, floral sprays, and rolling waves, the base inscribed with a six-character seal mark

There is an approx. 27 cm diagonal hairline crack extending from one side of the vase to the neck of the adjacent side, and a hairline crack along the joint of the body and foot (partially visible on three sides of the vase), possibly resulting from the firing. There are general firing imperfections and surface wear, including a minuscule glaze flake to the neck and a very superficial flake to the footring.

The motif of this finely painted vase derives from early Ming blue and white porcelain. Fruiting and flowering branches first appeared on underglaze-blue porcelain during the Yongle reign, a time when the potters at the imperial kilns in Jingdezhen achieved enormous developments in the refinement of materials and expansion of the decorative repertoire. Blue and white vases of meiping form decorated with related fruiting and flowering branches are among the most characteristic products of the Yongle period; for examples, see a vase in the Palace Museum, Beijing, illustrated in The Complete Collection of Treasures of the Palace Museum. Blue and White Porcelain with Underglazed Red, vol. 1, Hong Kong, 2000, pl. 30. Even the mottled cobalt ‘heaping and piling’ effect of the 15th-century originals was painstakingly reproduced by the Qing craftsmen in a display of their proficiency over the pigment. Like many other blue and white wares of the early Ming period, this design was reinvented and transformed during the Yongzheng Emperor’s reign before becoming one of the favourites of the Qianlong Emperor. A new life has been breathed into the Qing versions through the hexagonal form and the inclusion of European-style elements such as the scrolls on the neck. The familiar traditional Chinese motifs coupled with the secondary European-style designs not only provide an attractive aesthetic but also firmly celebrate the imperial authority of Qing China.

The Yongzheng prototype, as seen on a vase from the Grandidier collection and now in the Musée Guimet, Paris, is decorated around the neck with stems of flowers divided by European-inspired scrollwork (Oriental Ceramics. The World’s Great Collections, vol. 7, Tokyo, 1981, pl. 164). A group of Qianlong examples closely follows the prototype closely, suggesting that they were produced early in the Qianlong period. However, with more generous proportions and stylised scrolls without floral sprays around the neck, the present vase is highly unusual.