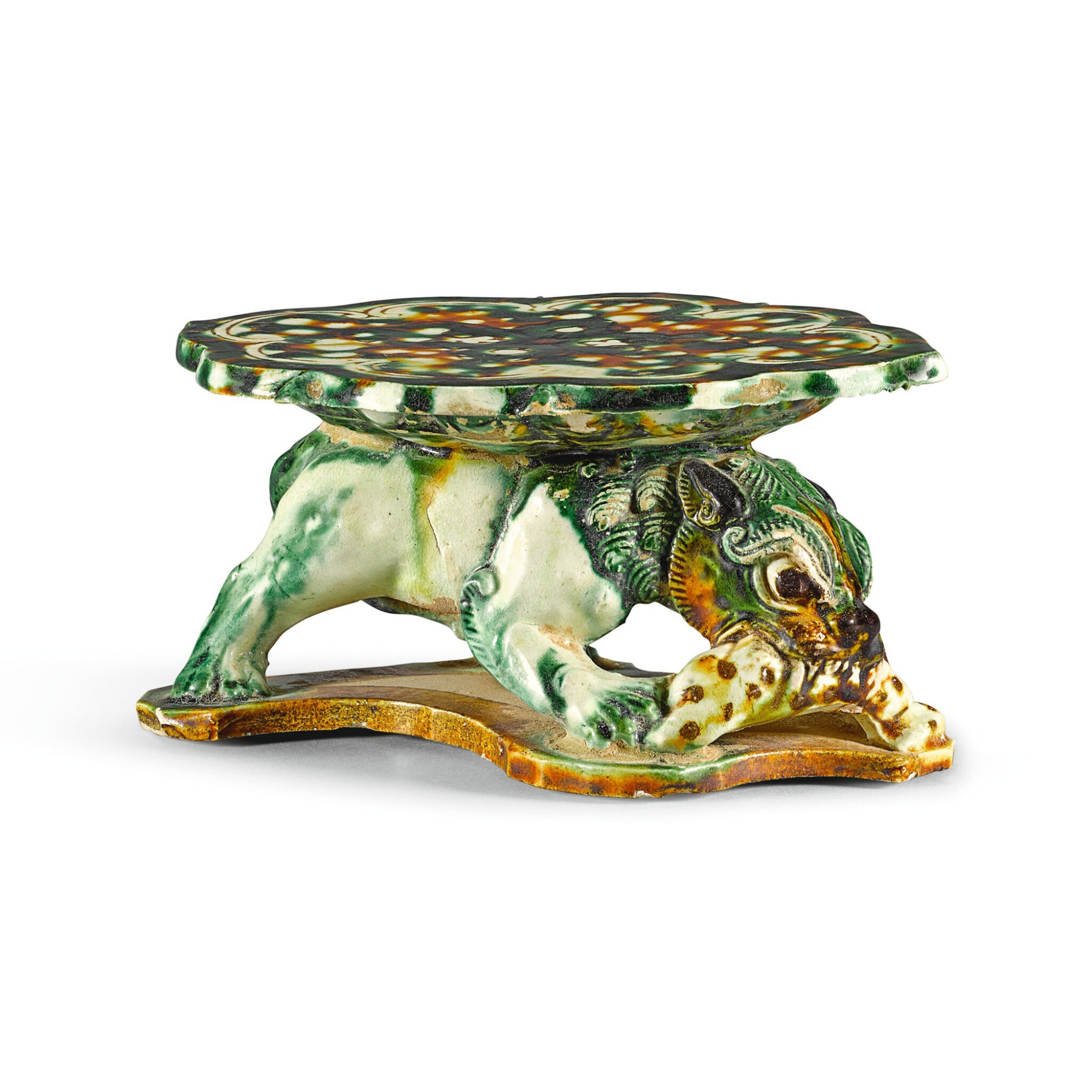 powerfully modelled as a ferocious crouching lion seizing a smaller leopard between its strong paws, with menacing fangs below wide-open eyes creating a ferocious expression, the slightly arched body detailed with a stylised curly mane and incised fur, supporting a platform in the shape of a lobed lotus leaf incised with a flower, covered overall with a vibrant mottled and streaked amber, green and cream glaze

There is a 5x2mm., glaze flake to the outer edge of the rim of the top, and several glaze flakes to a circa 6x1cm., area on the underside of the top.

The dating of this lot is consistent with the result of a thermoluminescence test, Oxford authentication Ltd., no. C97f20.

This pillow is striking for the powerful modelling of the lion and can be considered one of the finest examples of its type. The potter’s confidence and artistic sensitivity is evident in the rendering of the animals’ pose, its convincingly ferocious expression and the finely detailed mane and bushy eyebrows. The well-controlled application of green enamel that draws attention to the animal’s facial features makes this piece particularly special, as the lead-based glazes used on these wares are notoriously viscous and therefore very difficult to control.

Lions are not native to China, and in the Tang dynasty they were imported as tributary gifts from the Western regions of India and Central Asia. Revered for their strength and majestic demeanour, lions functioned as guardian figures as well as emblems of power. While depictions of lions as guardians abound in the arts of the Tang dynasty, those that illustrate the animal’s ferocious hunting nature are much less common. A small group of free-standing sculptures of lions slaying their pray, made in ceramic and carved from stone, may have provided inspiration for this piece. Stone sculptures of this type are discussed Osvald Sirén in Chinese Sculpture from the Fifth to the Fourteenth Century, p. 435, where he identifies the lion’s pray as a sheep and attributes the group to workshops in Shaanxi province. Sirén illustrates four stone sculptures of lions slaying a pray, pls a-d, the first from the collection of David David-Weill, and the second from the Eumorfopoluos collection, now in the Louvre Museum, Paris. For a ceramic sculpture of this type, see a sancai lion sold in these rooms, 17th December 1996, lot 12.

Pillows that feature such powerful depictions of lions are unusual, although a pillow with the lion fashioned in this pose but less finely articulated, was sold twice in our London rooms, 12th June 2006, lot 30, and 7th November 2012, lot 214; one missing the headrest in the Victoria and Albert Museum, London, is published on the Museum’s website, accession no. C.5-1910; and a third is illustrated in The Tsui Museum of Art. Chinese Ceramics, vol. I, Hong Kong, 1993, pl. 136. Compare also a sancai pillow of a crouching lion with similar features, from the Yangdetang collection, sold at Christie’s Hong Kong, 6th October 2015, lot 87.