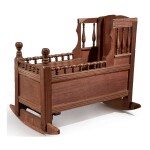 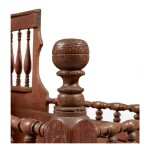 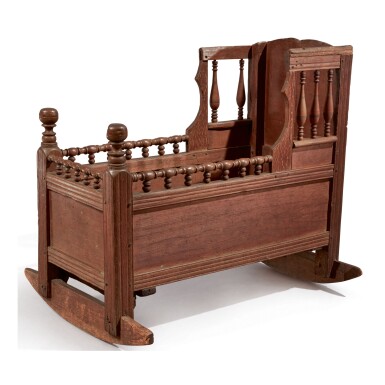 Property from the Collection of The Rhode Island School Of Design

Property from the Collection of The Rhode Island School Of Design

Joined American cradles are one of the rarest seventeenth century furniture forms. Crafted for affluent children, few were likely ever made and approximately only thirteen survive today.1 Most examples are simpler in construction and are comprised of four turned posts and four paneled sides. Only three examples survive with multiple turnings in the hood and along the side and foot rails. The foot post finial turnings relate directly to a cradle that once belonged to a Nathan Cushing, Providence, Rhode Island (RIF4016) and is illustrated in Wallace Nutting, Furniture Treasury, (New York: Macmillan, 1928), no. 1571. One of the floor boards of the cradle has crease molding profile, very similar to that of the Cushing cradle, and the hood’s spindle turnings relate to the spindles found in several seventeenth century spindle-back armchairs associated to Rhode Island (see Patricia E. Kane et al., Art and Industry in Early America: Rhode Island Furniture, 1650–1830, (New Haven, CT: Yale University Art Gallery, 2016), 143–144, no. 4). Although previously attributed to a southeastern Massachusetts origin, these associations suggest that this cradle may have been made in Rhode Island. For additional information on American cradles and their history and use, see R. Ruthie Dibble, “The Hands that Rocked the Cradle: Interpretations in the Life of an Object,” American Furniture 2012, ed. Luke Beckerdite, (Milwaukee, WI: Chipstone Foundation, 2012), pp. 1-23.