Property from a Private Collection, Pennsylvania 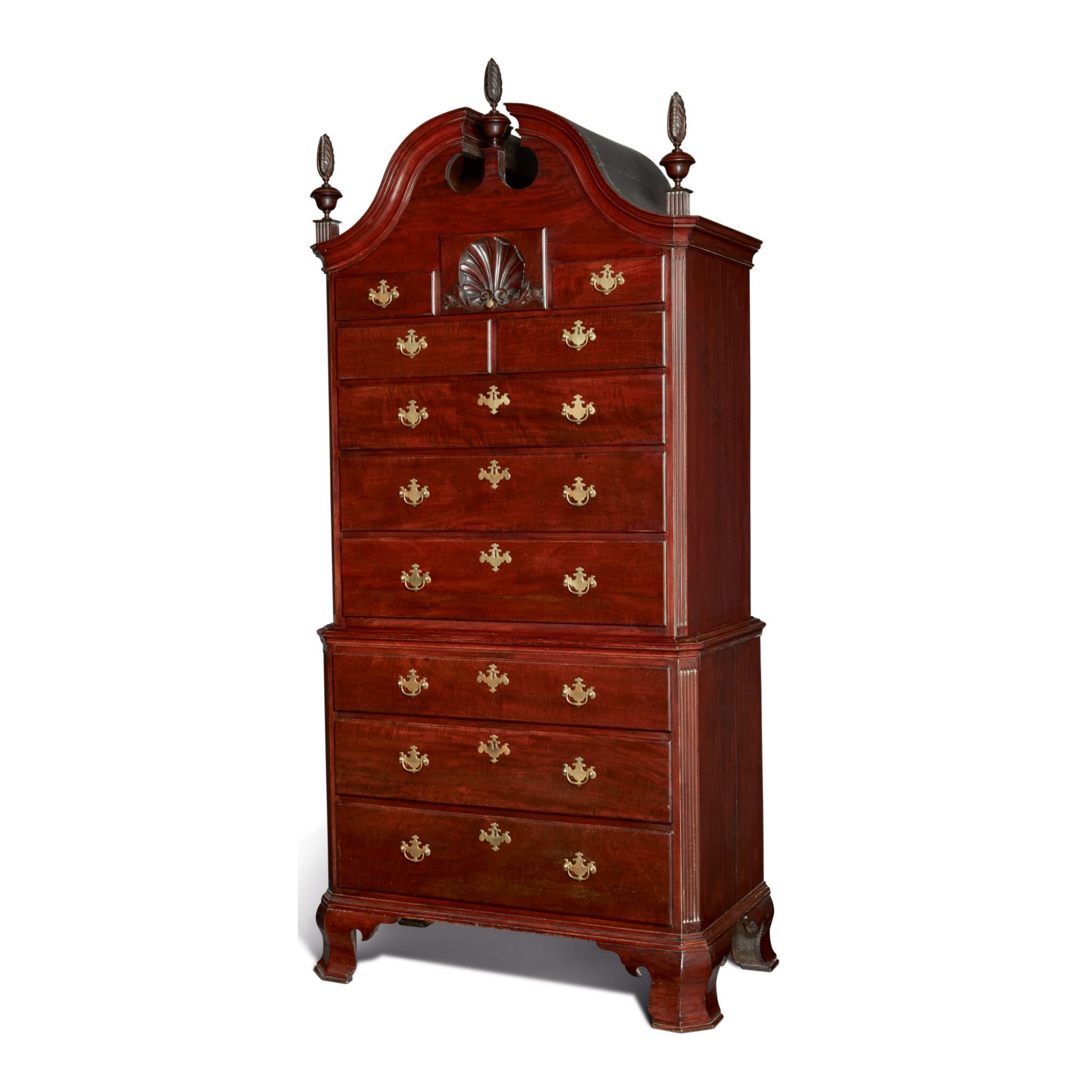 Property from a Private Collection, Pennsylvania

The overall form, tympanum drawer with relief carved shell, chamfered corners, base molding profiles, and bold ogee bracket feet of this monumental chest-on-chest closely follow those of a chest-on-chest signed by George Claypoole, Jr. (d. 1793), a member of a multi-generational family of cabinetmakers active in Philadelphia for most of the eighteenth century.1

The progenitor of the Philadelphia branch of the family, James Claypoole (1634-1687), was a successful London merchant, Quaker, and close friend of William Penn, who immigrated to Philadelphia in 1683. His son, Joseph (1677-1744), was the first in the family to enter the joiner’s trade and may have apprenticed with Edward Evans before establishing his own business by 1710. He trained two of his sons in the trade – George Sr. (1706-1793) and Josiah (1716/17-1757). George Claypoole Sr. appears to have reached a significant status in the Philadelphia cabinetmaking community, for in 1783, he paid $200 in occupational tax, an amount surpassed only by Thomas Affleck at $250 and matched only by Benjamin Randolph and William Cox. Although no objects survive with his label, bills of sale indicate he made a wide range of forms of varying prices for clients from the Quaker community as well as other local patrons including Samuel Meredith (1741-1817), husband of Margaret Cadwalader (sister of John), for whom he made a large quantity of furniture. He most likely trained his son, George Jr., who completed his apprenticeship about 1754, as well as Jonathan Gostelowe (1744-1795), who served his term during the late 1750s and early 1760s.

This chest-on-chest relates to a piece made by the Claypoole shop in the mid-eighteenth century. George Jr. likely made the signed chest-on-chest soon after completing his apprenticeship in 1754. In fashioning it, he appears to have closely followed Claypoole shop practice of the 1740s, for it is nearly identical to a chest-on-chest attributed to the Claypoole shop that was made earlier, between 1740 and 1750.2  A similar tympanum opening, drawer arrangement, shell composed of broad convex and concave segments with applied leaf carving, and chamfered corners are featured on a high chest with a history in the Penn family attributed to Joseph Claypoole or George Claypoole, Sr.3 A chest of drawers attributed to George Claypoole Sr. or Jr. displays nearly identical chamfers with three flutes, base moldings, and ogee bracket feet.4 The latter details are also found on a chest of drawers at Cliveden bearing the label of Jonathan Gostelowe.5

1 See Andrew Brunk, “The Claypoole Family Joiners of Philadelphia: Their Legacy and the Context of Their Work,” American Furniture 2002 (Hanover and London: The Chipstone Foundation): fig. 26, p. 167.