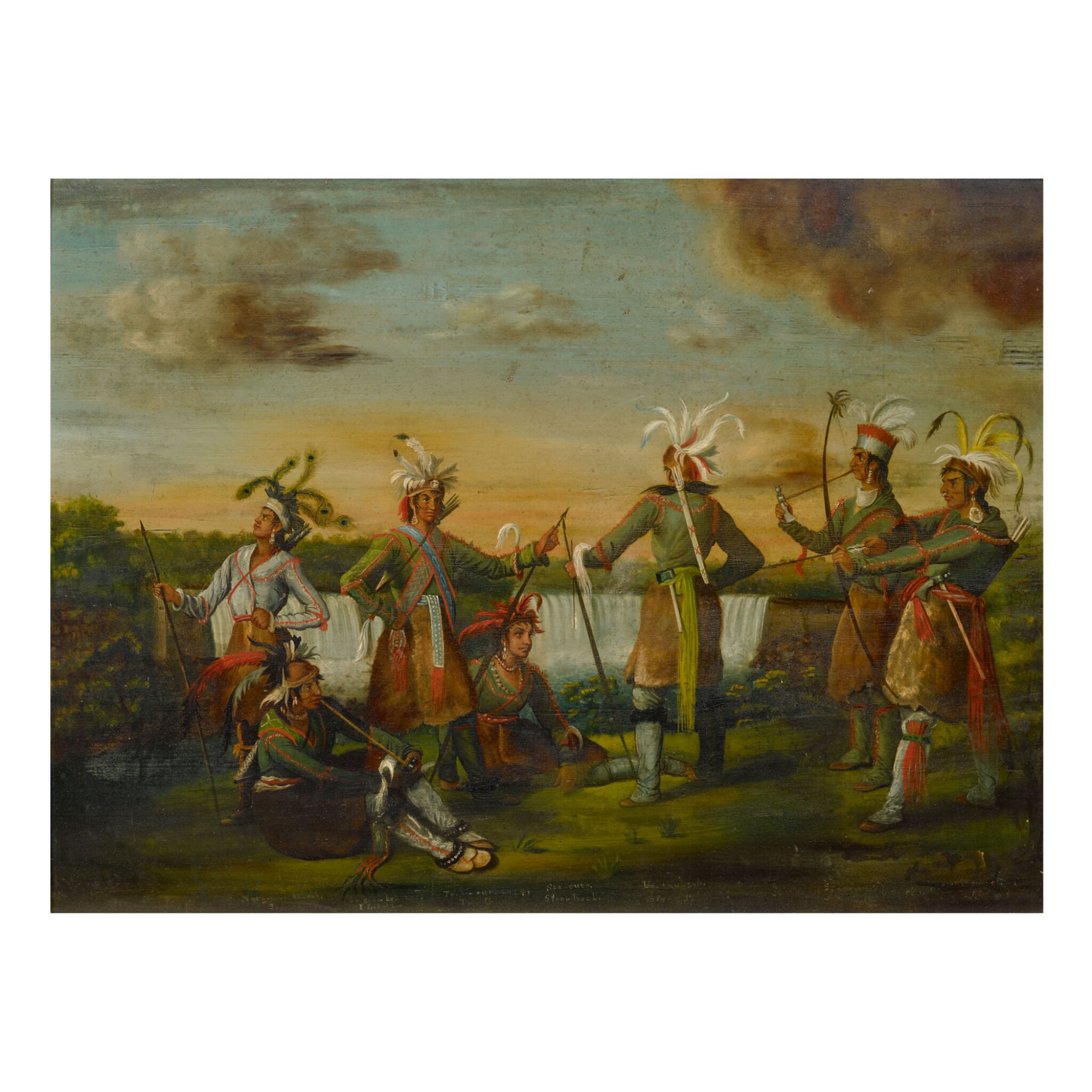 SENECA VETERANS OF THE WAR OF 1812

inscribed with identities, some indistinct, beneath each figure

The panel is warped convexly and there appears to be minor surface cracking. The original horizontal texture of the wood panel is visible throughout, most prominently in the upper register. There are two diagonal scratches in the center sky into the headdress of the standing figure and some scattered staining and accretions primarily in the lighter colors. Under UV: a thin line of inpainting to the scratch at center, a spot in the upper left sky and a few dots in the upper right sky.

Horatio G. Warner, Rochester, New York, 1861 (acquired from the above);

By descent to the present owners.

John Lee Douglas Mathies was an accomplished, self-taught painter from Canandaigua, New York who took as his subjects several notable figures and events of the early 19th Century, including Jemima Wilkinson, the Universal Friend, and Red Jacket, the great Seneca orator. In 1815, Mathies opened a school of drawing in Canandaigua, where he lived until moving to the burgeoning city of Rochester in 1823. In his 1958 article documenting Mathies’ artistic career, Herbert A. Wisbey, Jr. wrote, “He was a man of real artistic ability who was never able to fulfill his dream of earning his living as an artist. As long as his paintings were scattered, and many unidentified, no evaluation of his career as an artist was possible. The individual excellence of the few known paintings associated with Mathies indicated a talent of great promise. When all of the known examples of his work are considered as a group, it becomes clear that Mathies is an important American primitive artist” (“J.L.D. Mathies, Western New York Artist,” New York History, vol. 39, no. 2, April 1958, p. 142).

The present work depicts seven Native Americans of the Seneca tribe who fought on behalf of the American army in the War of 1812. The figures are each identified by both their Native American and English names along the bottom of the painting, some of which have become indistinct; they read: Ne-gun-ne-au-goh (Beaver), Se-gou-ken-ace (I Like Her), Te-ki-eue-doga (Two Guns), Sta-eute (Steep Rock), Ue-tau-goh (Black Squirrel), Senung-gis (Long Horns, the Chief), and Ne-gui-e-et-twassaue (Little Bear). According to Mr. Wisbey, “Mathies was on the Niagara frontier in October and November, 1821. His small black notebook contains two affidavits dated October, 1821, one of which was signed in Buffalo. One mentions two views by him of Niagara Falls, one from the American and one from the Canadian side, and the other his portrait of Red Jacket, which he had evidently brought along to exhibit… Probably at about this time he painted a group of Seneca Indians, several of whom were well known personalities on the Niagara frontier” (Ibid., p. 136).

The scene, set before Niagara Falls, is taken from a period lithograph by the English artist and printmaker Denis Dighton published in 1819.