PROPERTY FROM THE COLLECTION OF ARTHUR AND SARA JO KOBACKER 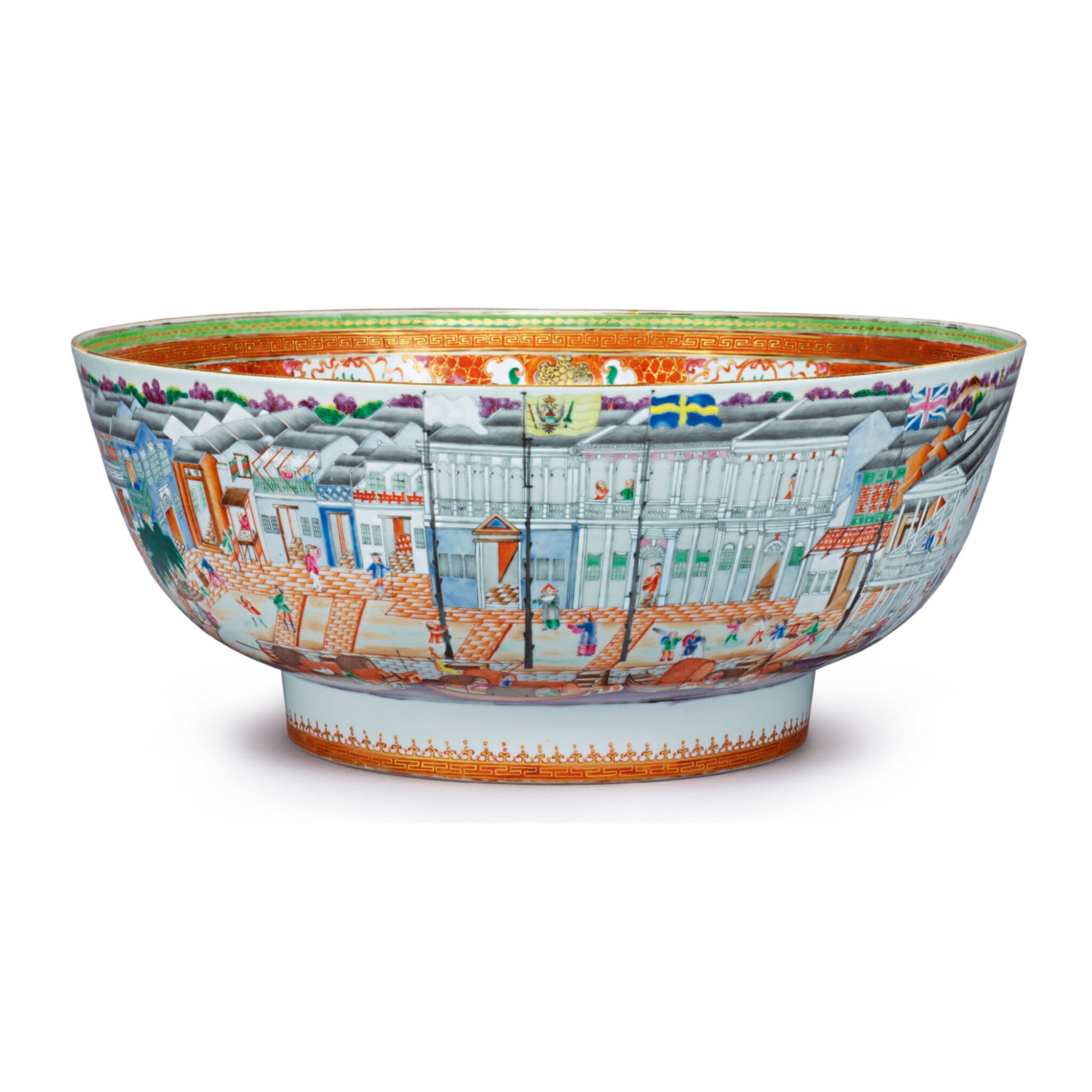 PROPERTY FROM THE COLLECTION OF ARTHUR AND SARA JO KOBACKER

finely potted with a slightly tapered foot rising to deep rounded sides, the exterior painted with a continuous scene of the hongs at Canton by the Pearl River, the factories flying the French, Imperial Austrian, Swedish, British, Dutch and Danish flags, the paved waterfront bustling with European and Chinese figures, the interior painted with a central floral basket encircled with an elaborate border of further flower baskets alternating with shaped panels and flower festoons, all underneath a green and gilt husk band

The bowl with U-shaped section out (in 3 pieces) measuring approx. 8 in. in length with a maximum depth of 3.5 in. restored with high quality museum-style restoration with minimal overspray, with an associated L shaped hairline extending down the side of the bowl measuring approx. 2.5 in., and an adjacent restored rim chip. The area previously stablized with staples on the exterior and the holes have since been filled. The repair extends through the galleried building to the right of the British flag through the Dutch flag. There is a small amount of blue enamel around one doorway which has been retouched. Overall with minor surface wear and minor and expected firing imperfections.

There are many different variations depicting the European hongs (factories) on the Canton waterfront on a Chinese export punch bowl, and the earliest example was produced circa 1765 and illustrated in Bredo L. Grandjean, Dansk Ostindisk Porcelæn, Copenhagen, 1965, fig. 113-114, cat. no. 107, now in the collection of M/S Maritime Museum of Denmark, with one side depicting the hongs and the other side showing the stock exchange in Copenhagen. The hongs were ultimately destroyed in 1856 by a devastating fire, and following that, the Second Opium War began. Between 1765 and the early 19th century, varied views of the hongs were recorded on porcelain, as well as other mediums including Chinese export paintings on canvas and copper. Therefore, hong bowls, in their depiction of the factories and flags, arguably relate more closely to Chinese export paintings rather than other types of Chinese export porcelain and serve as a guide to the evolution of European commerce on the Canton waterfront. In addition, while describing a very similar example in the Hodroff collection at Winterthur, illustrated in Ronald W. Fuchs II and David S. Howard, Made in China, Winterthur, 2005, pp. 138-139, cat. no. 88, the authors note the blending of painting traditions between the continuous horizontal landscape seen in Chinese handscrolls and the Western one-point perspective to create such bowls.

Closely related examples are in major museums and collections, including one example in the Franks Collection at British Museum, illustrated in R.L. Hobson, The Later Ceramic Wares of China, New York, 1925, pl. LXX, fig. 3. Another example is illustrated in William R. Sargent, Treasures of Chinese Export Ceramics from the Peabody Essex Museum, Salem, Massachusetts, 2012, p. 435, cat. no. 239, where the author attributes the dating of this particular type of hong bowl to between 1779-87, pointing to the design of the yellow Imperial Austrian flag with a double-headed eagle depicted on this bowl, which the hong flew only between 1779 to 1787, thus establishing the date of this design between those years. He further speculates that the monogram MT on the chest of the eagle stands for the empress of Austria, Maria Theresa (1717-80). Another pair of closely related punch bowls, from the collection of Anthony J. Hardy, and on loan to the Hong Kong Maritime Museum, is illustrated in Libby Lai-Pik Chan and Nina Lai-Na Wan, The Dragon and The Eagle: American Traders in China, Hong Kong, 2018, vol. I, pp. 138-139, cat. no. 2.2, where the author further expanded on Sargent's dating of 1779-87, and suggests that since the French flag is white, signifying that the time of manufacture would be prior to the French Revolution, and by the absence of the American flag, which would appear several years later at around 1785, the latest scholarship dates this type of hong bowl would most likely have been made between 1780-85. A closely related example, from the James F. Scott collection, was sold in these rooms, October 15th, 2018, lot 245.