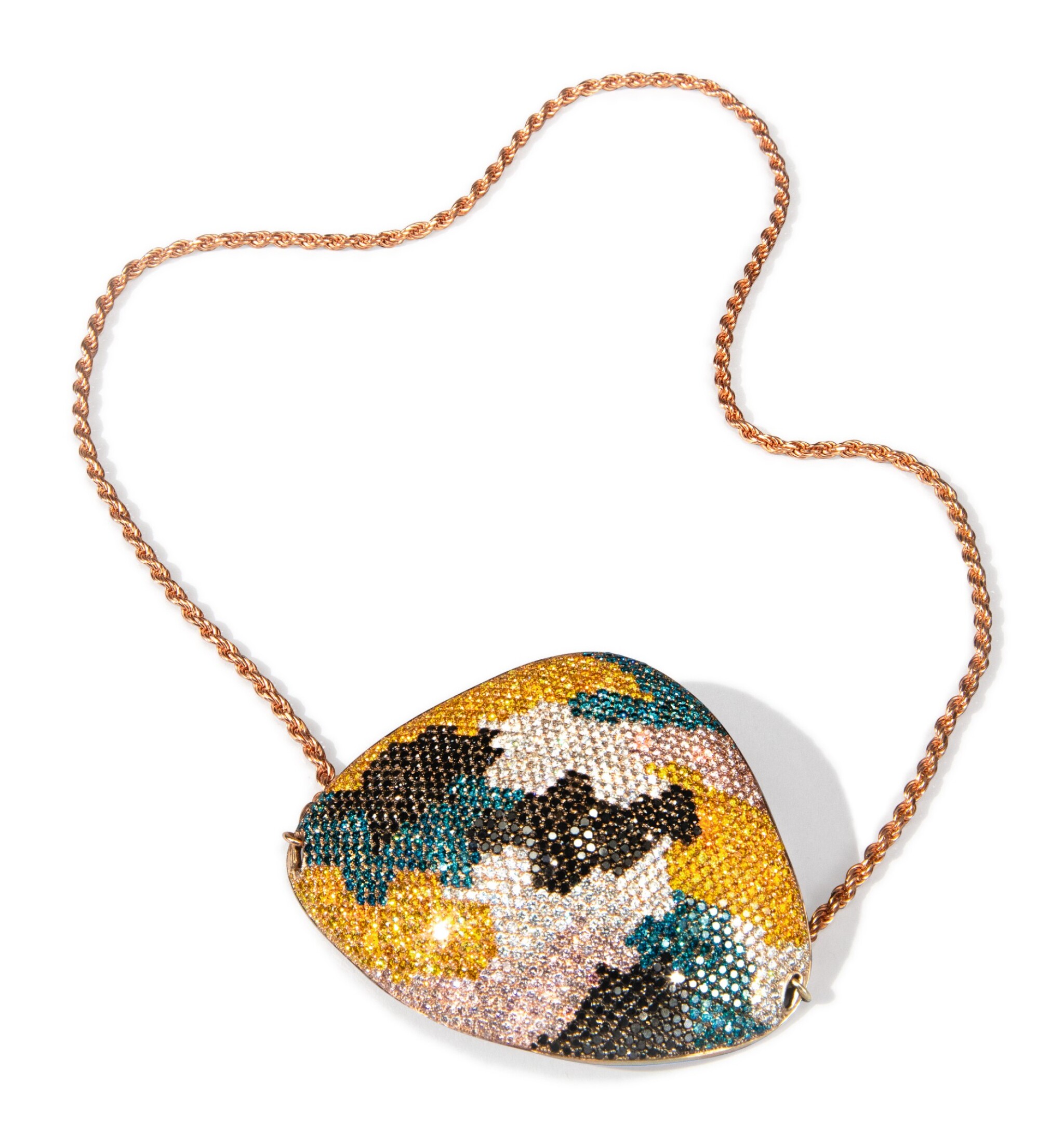 •round near-colorless and colored diamonds in shades of pink, yellow, blue-green and black

AN EYEPATCH FIT FOR FOR A KING — SLICK-RICK'S CAMOUFLAGE PATTERN, MULTICOLOR DIAMOND EYEPATCH

Made by the "King of Bling" Jacob the Jeweler according to the custom design of Slick-Rick's wife and manager Mandy who presented it to him as a gift for his 40th birthday. This fabulous eye-patch screams Slick-Rick, whose is known worldwide for his incredible style, big jewelry, and of course, his legendary music.

The only thing more iconic, interesting, and intriguing than the stories Slick Rick tells on wax might be his own. Lasting through four decades, six presidencies, and countless trends, he endures as “the most sampled hip-hop artist in history” with GRAMMY® Award nominations and numerous multiplatinum albums to his name. It’s why he remains synonymous with rap music, culture, and fashion. It’s why he counts some of the most influential people in the world as ardent admirers—whether it be Eminem declaring, “I’m just a product of Slick Rick” on 2020’s “Godzilla,” JAY-Z citing him as an inspiration on NETFLIX’s My Next Guest Needs No Introduction with David Letterman, A-list star Idris Elba signing him to his 7 Wallace UK imprint, Mark Ronson dissecting his work as part of a TED Talk, or Mariah Carey welcoming him on stage to perform their duet “Giving Me Life” during a sold-out show at Radio City Music Hall in 2019. It’s why rappers started to ditch jeans and oversized hoodies for high fashion—as WWD notes, “Slick Rick pioneered the merge of luxury and street.” It’s why no celebration is complete until somebody busts out “La-Di-Da-Di”, “Mona Lisa”, “Children’s Story” or Hey Young World”.

The latter would be sampled, interpolated, and shouted out north of 800 times by 2020, spanning Snoop Dogg’s “Lodi Dodi” from 1993’s seminal Doggy Style through Jay Rock’s GRAMMY® Award-winning “King’s Dead” [feat. Future, Kendrick Lamar, & James Blake] from the chart-dominating Black Panther: The Album in 2018. He made history as “the third artist signed to Def Jam Recordings” and “the most successful British-American rapper,” delivering a discography comprised of The Great Adventures of Slick Rick [1988], The Ruler’s Back [1991], Behind Bars [1994], and The Art of Storytelling [1999]. VH-1 Hip Hop Honors celebrated him in 2008 and The Source ranked him among the Top 5 of its “Top 50 Lyricists of All Time.”

A style icon, he starred in a high-profile MCM “POP-IN @ NORDSTROM” Campaign and collaborated with brands such as Puma, Bally, Urban Outfitters, Odd Sox, and Optics, to name a few. As a committed philanthropist, he co-sponsored The Bronx Youth Empowerment Program’s Christmas Charity Event for three years and fought homelessness alongside politicians in New York and Florida. The Smithsonian National Museum of African American History and Culture paid homage to him with a popular exhibition, and he claimed a place on The Bronx Walk of Fame as well as a street named after him in The Bronx. He works tirelessly against youth incarceration and poverty and supports children’s literacy initiatives and the current Black Lives Matter protests and movements.