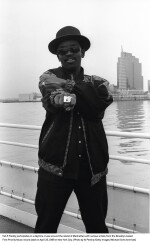 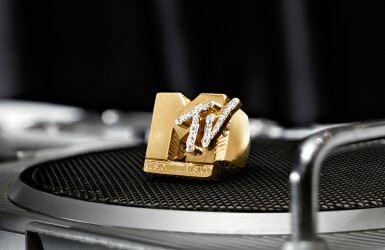 At the time that Yo! MTV Raps! burst onto the scene in 1988, the style in jewelry was thick gold rope necklaces, crosses, heavy medallions, Mercedes logos and the like, but the shows's host, Fab 5 Freddy, wanted a piece that was totally unique, so he decided to design his own. To create the piece, Freddy worked with Tito the Jeweler, aka "Manny", the first Hip Hop jeweler, who had built up a loyal following, creating custom over-the-top pieces for drug dealers and pimps in the 1970s. Eventually, all the big Hip Hop stars became his clients, including Rakim, Salt-N-Pepa, Biggie, LL Cool J, and of course, Fab 5 Freddy.

Fab 5 Freddy, is a visual artist, filmmaker and Hip Hop pioneer. In the late 1970s, he was a member of the Brooklyn-based graffiti group, the Fabulous 5, who specialized in painting the sides of subway cars. His name was first introduced to the pop culture scene when Blondie name-checked him in her 1980s hit "Rapture", saying "FAB 5 FREDDY told me everybody's fly." He went on to play a pivotal role in bridging the gap between the early rap and graffiti scene of New York's uptown, and the punk music and art scene of downtown. He would go on to co-produce the legendary film Wild Style with Charlie Ahearn, and hosted the wildly popular MTV show Yo! MTV Raps.