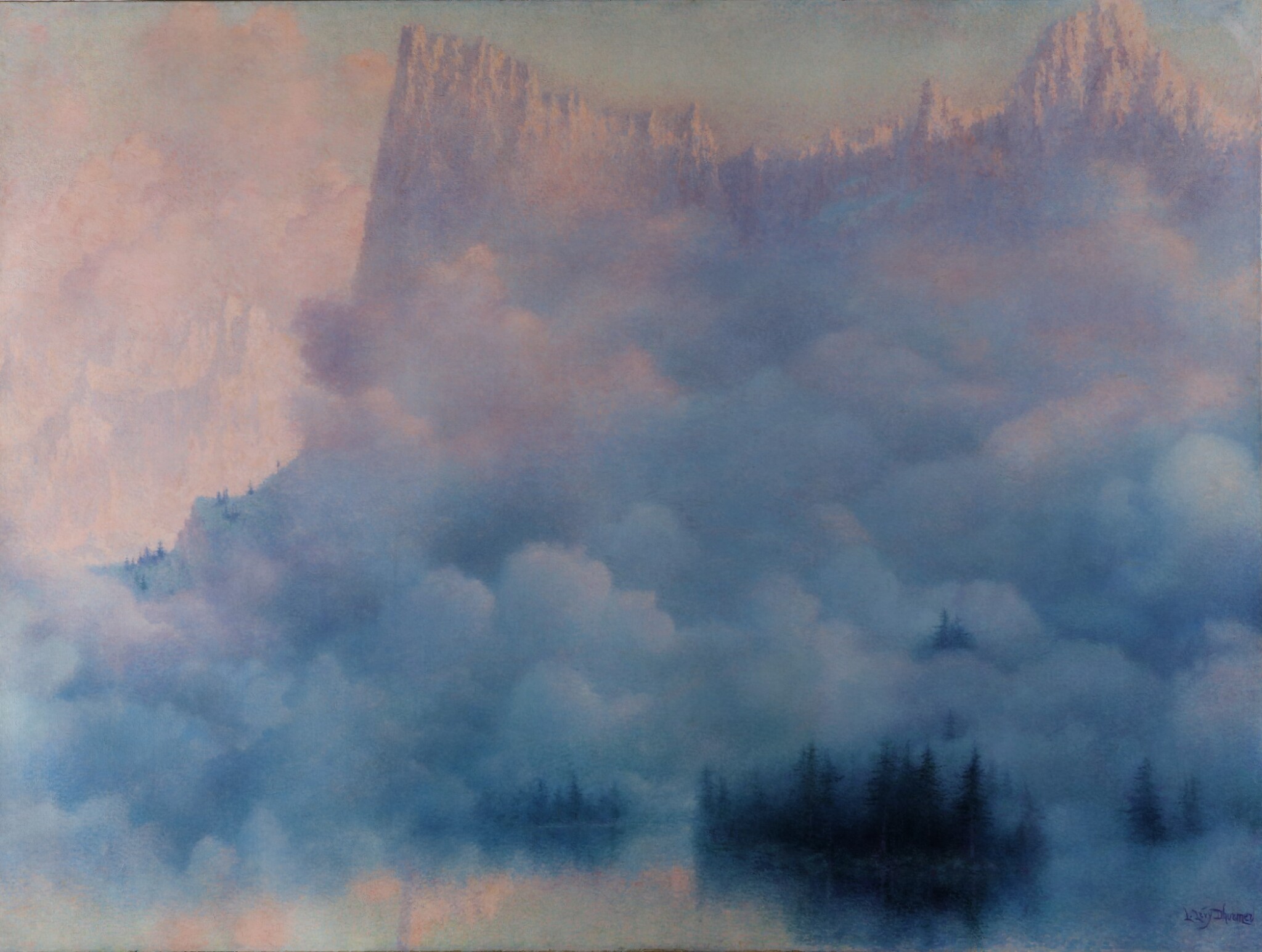 To request a condition report for this lot, please contact the Impressionist & Modern Art department directly at 212-606-7360 or daysaleny@sothebys.com.

Paysage montagneux is an exceptional example of Lucien Lévy-Dhurmer’s unique and immersive style. Likely based on his extensive travels throughout Europe, especially northern Italy, the artist depicts an alpine lake, shrouded in a misty haze of clouds but illuminated by the pink light of dusk or dawn. Pine trees along the shore are reflected in the mirror-calm lake, as are the jagged snow-capped cliffs seen at the top of the composition. The saturated, candy-color hues and mystical atmosphere of the work define Paysage montagneux as one of Lévy-Dhurmer’s distinctive compositions.

Born to a Jewish family in Algiers, Lévy-Dhurmer began his art studies in Paris and worked as a lithographer before becoming artistic director at the ceramics factory of the well-known Clément Massier in Golfe-Juan, on the French Riviera, in 1887. In the 1890s, Lévy-Dhurmer turned to painting, becoming close to artists associated with the Symbolist movement, including Carlos Schwabe, Alphonse Osbert and Alexandre Séon, and establishing his reputation with an exhibition at Galerie Georges Petit in 1896. His success continued throughout his life, including a retrospective exhibition at the Musée des Arts Décoratifs in Paris in 1952, the year before his death.

Lévy-Dhurmer’s aesthetic synthesized the tenets of Symbolism – believing that art should reflect a feeling or emotion as opposed to the Realists impulse to record the natural world – with the influences of his childhood spent in Northern Africa, the arts of Japan and the bright colors of Impressionism. Color, line, and composition – and, in the case of Paysage montagneux, monumental size – combine to provide an all-encompassing and emotional experience for the viewer. At the turn of the century, Lévy-Dhurmer’s dream-like pictures fit perfectly with the increasingly popular Art Nouveau aesthetic, in which organic forms were reinterpreted with Rococo-inspired decorative flourishes, leading to his increasing artistic success.

Paysage montagneux was the largest of three monumental canvases offered at Sotheby’s London in 1972 from the collection of Auguste Rateau (1863-1930). A successful industrialist and engineer, Rateau’s advances in turbomachinery and internal combustion engines, including those used in aircraft, marine and central station applications, remain foundational in the industry.

In addition to his scientific endeavors, Rateau was a strong proponent of modern art and design. In 1910, he commissioned Lévy-Dhurmer to design a number of rooms, including two salons, a library, a dining room and a study (appropriately decorated with a frieze of stylized turbines and engine parts), in his apartment at 10bis avenue Élisée-Reclus, along the Champ-de-Mar in Paris’ seventh arrondissment. Lévy-Dhurmer saw his role as that of an ensemblier, conceiving interiors with a specific aesthetic scheme, the artist responsible for designing everything from paintings and wall paneling to furniture and upholstery and even details such as door handles and drawer pulls. While we do not know what room Paysage montagneux would have hung in, the goal was a harmonious interior in which no element dominated or detracted from the whole.

Lévy-Dhurmer’s work for the Rateau residence, in which he created an entire sensory experience through interior design, highlights his skill as both a painter and designer. In 1950, the apartment, with its complete interiors, was rented by René de Montaigu based on the stipulation that he would eventually purchase the complete suite of Art Nouveau woodwork and furnishings. Elements from the rooms were dispersed at public auction in Paris beginning in the late 1960s; the dining room, better known as the Wisteria Room, was purchased by The Metropolitan Museum of Art, New York, in 1966.