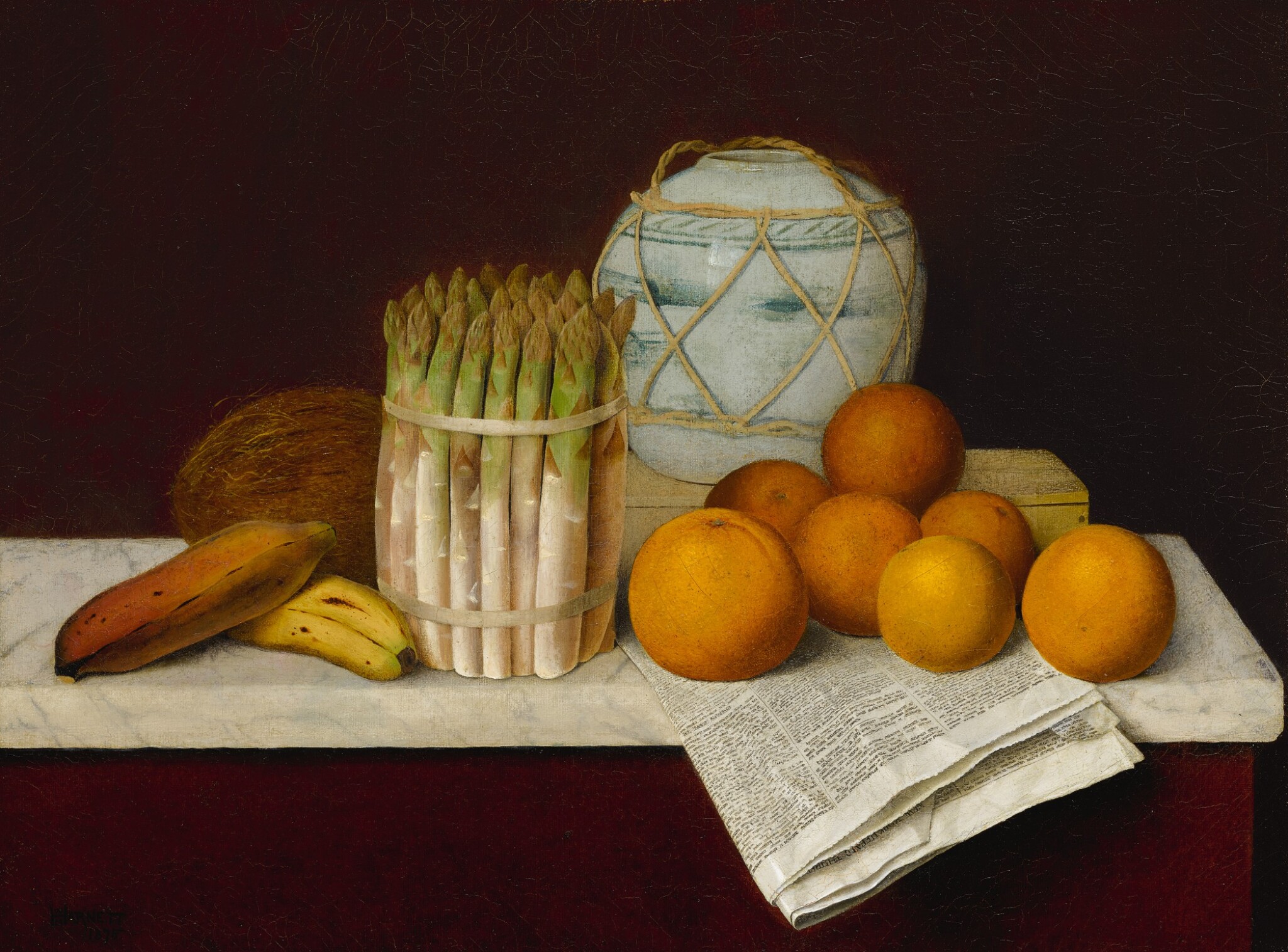 The present work is accompanied by a letter from Dr. William H. Gerdts, former Professor of Art History at the City University Graduate School, New York.

The following condition report has been provided by Simon Parkes, Simon Parkes Art Conservation, Inc., New York, an independent restorer who is not an employee of Sotheby's.

This painting is in good condition. The canvas is well stretched on its original stretcher. It is unlined, but the reverse has been treated with a sizing agent and the tacking edges have been reinforced. The paint layer is stable. Under ultraviolet light, it can be seen that the paint layer had been selectively cleaned, leaving uneven remnants of an old varnish in the majority of the darker areas of the composition. There are a series of retouches addressing small cracks in the banana furthest to the left. There are a few small retouches in the table top and in the left side of the table base. The work should be hung as is.

For more information on this lot, please email Elizabeth Goodridge at Elizabeth.Goodridge@sothebys.com.

Acquired by the present owner from the above, 1979

Fruit and Asparagus is one of the small group of still lifes by William Michael Harnett with which the artist emerged into public view in the mid 1870s, before he turned to the still life subject matter for which he is best known today. These were painted between 1874-76, after which he turned almost exclusively to pictures stressing primarily man-made, rather than nature-grown objects. Of this group, there are known only four works of substantial size, of which this is one.

The subject matter of the present picture, primarily fruit and vegetables, allies Harnett to the tradition of American still life painting back through the two previous generations, the mid-century work of artists such as John F. Francis and George Hall and the first generation of American still life specialists such as Raphaelle and James Peale. Yet, the actual subject matter in this painting is quite special. Actually, none of the specific objects in the picture are common. Even the oranges are relative rarities in the tradition, though they would soon become a specialty of William John McCloskey in the next decade. But at the time, they were exotic, tropical fruit, as were certain bananas and plantains, while asparagus stand out because they are rarities in the history of art. (It is doubtful that Harnett would have known the example of that subject painted in the previous decade by the little studied Paul Lacroix).

Despite the superficial similarity in the painting of edible subject matter to the artists of the previous generation, Harnett has brought a new sensibility both to the choice of subject and to the matter of painting. Unlike the work of Francis, this is emphatically not a “luncheon” or “dessert” picture. That is, the combination of edibles do not suggest a meal or a part of one. They combine for aesthetic diversification, not because they bear association in practical terms. Harnett appears to have chosen these objects because of their relative exoticism, but also because they offered him the opportunity to display his amazing virtuosity in the creation of tactile and textural illusionism. The hairy coconut, the plump bananas, the first asparagus and the rounded, nubby form of the oranges are carefully distinguished, and Harnett creates a counterpoint with all those combined forms and textures with the thin flatness of the newspaper and the shining, reflective surface of the sleekly smooth ceramic.

These qualities not only contrast with the work of Francis and others, but also already look forward to Harnett’s later work. Deceptive illusionism is the key to Harnett’s painting as it was not to the previous generations. And to heighten that, Harnett has introduced the newspaper which stretches beyond the edge of the marble top table, that is, beyond the picture plane and seemingly out into the space of the viewer. His mastery of the nature of newspaper and the illusion of printing on it (which, however, is not readable) are qualities he will repeat over and over ahead in the future and which will be taken up by his myriad of followers but it is found here for the first time. Even Harnett’s use of the marble top table or counter is different from that of his predecessor, Severin Roesen. Roesen introduced this support and luxury to his abundant fruit and flower compositions. Harnett’s display is, in contrast, quite austere. He has chosen marble (rather than wood or a cloth covering) in order to contrast a specific, hard texture with the ones on top of it. A mid-century artist would soften the contrast between the fragile fruit and vegetables; Harnett emphasizes it. Likewise, his color and tonal contrasts are dramatic, creating strong patterns of light and dark, rather than the smoother, softer transitions of the mid-century.

Another quality already found here which will remain constant throughout Harnett’s relatively short career is his concern for structured composition combined with a seeming – and “illusion” – of casualness. The objects may seem to be displayed in a random fashion, but they have actually been arranged extremely carefully. The newspaper, for instance, appears on a diagonal parallel with the right side of the table, but also at a strong but not obvious right angle to the plantain at the left. The upward diagonal of that same fruit, appearing natural as it rests on the yellow banana below, parallels that of the oranges right of center, which actually create a three-dimensional diamond with the form of the newspaper. The same diagonal back into the space is duplicated by the two emphatically upright forms, the asparagus and the ceramic, which balance the strong horizontals of the table top itself and the row of oranges and the coconut. Those two largest forms, the bunched asparagus and the ceramic are both tied up, but then those bindings are themselves contrasted, those around the asparagus being ribbons circling horizontally, while the rope around the ceramic creates a diagonal, looping pattern. These forms are actual, of course, but they are chosen with great purpose arranged with great care and painted with great illusionism.