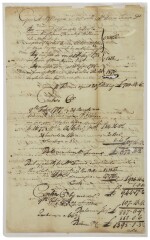 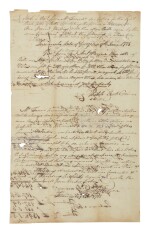 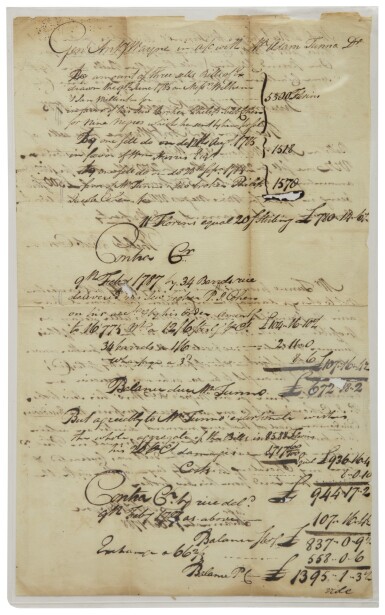 AUTOGRAPH DOCUMENT SIGNED ("ANTHONY WAYNE"), REGARDING THE FINANCIAL AFFAIRS OF HIS RICE PLANTATION

After Yorktown, Wayne negotiated peace treaties with both the Creeks and the Cherokees, severing their ties to the British. The present document represents Wayne's attempts to untangle affairs in connection with the large rice plantation that was subsequently given to him by a grateful Georgia. Wayne failed as a rice planter, in part because the crop was labor intensive and required a large investment in slaves. The resulting debt harried the erratic soldier even though Georgia law favored debtors, and his creditors could not, or did not, press him as hard as he appears to have thought. This document is headed "Genl. Anthony Wayne in A/C with Mr Adam Tunno," from whom Wayne had purchased slaves. Wayne had credit with Amsterdam merchants Willem and Jan Willink, who are mentioned herein; it appears that some of his payment was also to be made in rice. In his accounting practices, Wayne employed some intemperate references to his business associates: Philip Jacob Cohen, who acted for the slave dealer, is repeatedly referred to as "Jew Broker," while Tunno, an immigrant from Scotland, is called "Insidious Caladonian."

In 1791, the resolution of a resultant lawsuit released Wayne from debt but spelled the end of his dream of becoming a genteel Georgia planter. This circumstance led him to return to military service and his successful frontier campaign during the Northwest Indian War that opened much of the Midwest to settlement.