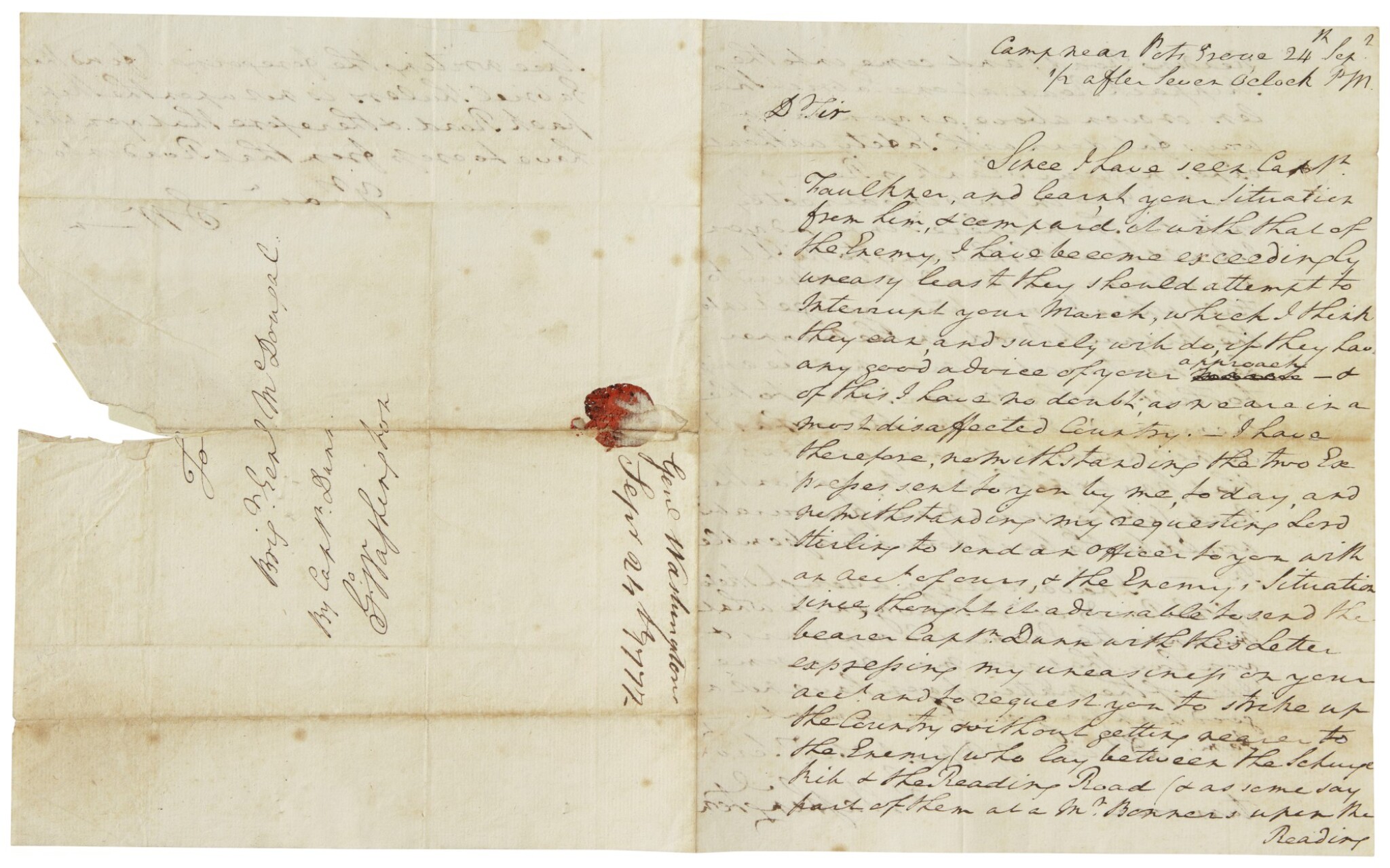 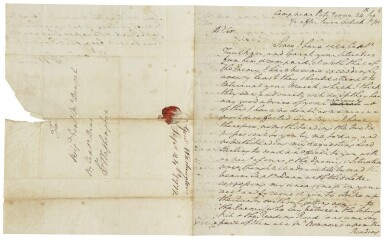 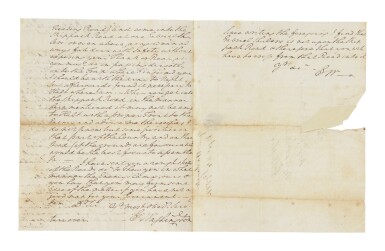 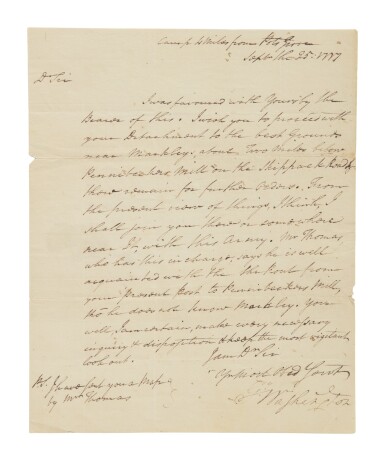 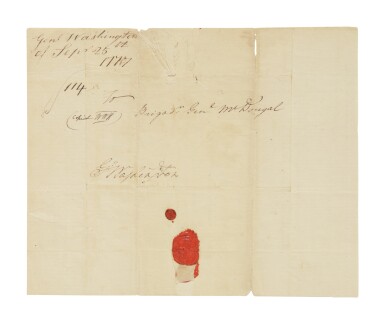 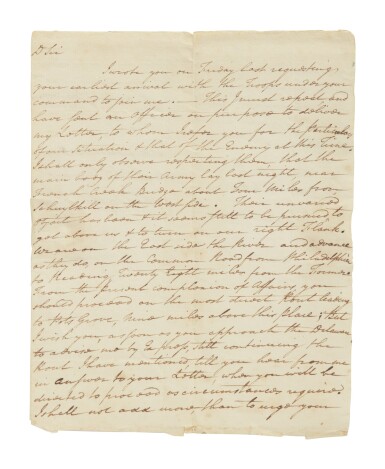 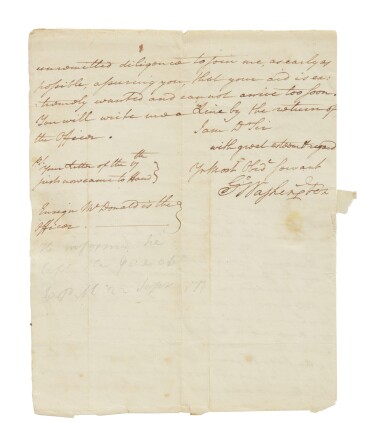 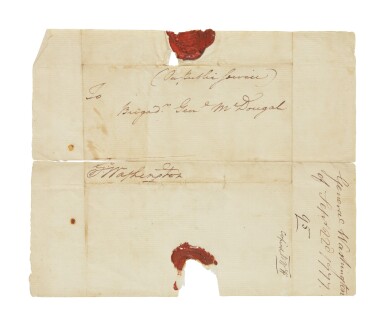 A SERIES OF ONE AUTOGRAPH LETTER SIGNED & THREE MANUSCRIPT LETTERS SIGNED AS COMMANDER OF THE CONTINENTAL ARMY ("GO: WASHINGTON"), TO GENERAL ALEXANDER MCDOUGALL, DIRECTING THE ARRIVAL OF THE REINFORCEMENTS FOR THE PHILADELPHIA CAMPAIGN

"I … urge your unremitted diligence to join me, as early as possible, assuring you, that your aid is extremely wanted and cannot arrive too soon … as we are in a most disaffected Country." In the wake of Washington's defeat by Howe at Brandywine eleven days earlier (and the even more recent Paoli Massacre suffered by Anthony Wayne), Washington maintains steady communications with the man leading reinforcements as he and Sir William Howe spar for position around Philadelphia.

In the first letter of the series, he entreats McDougall to hurry his reinforcements from New York, directing him on the best route of march: "I wrote you on Friday last requesting your earliest arrival with the Troops under your command to join me. This I must repeat, and have sent an Officer on purpose to deliver my Letter, to whom I refer you for the particulars of our Situation & that of the Enemy at this Time. I shall only observe respecting them, that the main body of their Army lay last night, near French Creek Bridge about Four Miles from Schuylkill on the West side. Their unvaried Object has been & it seems still to be pursued, to get above us & to turn on our right Flank. We are on the East side the River and advance as they do, on the Common Road from Philadelphia to Reading, Twenty Eight miles from the Former. From the present complexion of Affairs, you should proceed on the most direct Rout leading to Pot’s Grove, Nine miles above this place; but I wish you, as soon as you approach the Delaware to advise me by Express, still continuing the Rout I have mentioned, till you hear from me in Answer to your Letter, when you will be directed to proceed as circumstances require. I shall not add more, than to urge your unremitted diligence to join me, as early as possible, assuring you, that your aid is extremely wanted and cannot arrive too soon. You will write me a Line by the return of the Officer."

Two days later, Washington expresses his satisfaction with McDougall's progress, "I am pleased to find by yours from Coryells Ferry that you are so near me. The Army will fall down to Night to a well known place called the Trap 24 Miles from Philada. Tomorrow we shall proceed further down towards Philada." That same evening, Washington wrote again to McDougall after receiving new intelligence, changing his orders and urging caution: "Since I have seen Captn Faulkner, and learnt your Situation from him, & compar’d it with that of the Enemy, I have become exceedingly uneasy least they should attempt to Interrupt your March, which I think they can, and surely will do, if they have any good advice of your approach—& of this I have no doubt, as we are in a most disaffected Country. I have therefore, notwithstanding the two Expresses sent to you by me, to day, and notwithstanding my requesting Lord Stirling to send an Officer to you with an Acct of ours, & the Enemys Situation since, thought it advisable to send the bearer Captn Dunn with this Letter expressing my uneasiness on your Acct and to request you to strike up the Country without getting nearer to the Enemy (who lay between the Schuylkill & the Reading Road & as some say part of them at a Mr Bonners upon the Reading Road) and come into the Skippack Road at one Gabriel Shulers or even above; as you can always fall down with safety without exposing your Flank or Rear, as you must do in passing directly on to the Trap: where I informd you I should be with the Army to Night, but afterwards found it necessary to Halt where I am. When you get into the Skippack Road in the manner here mentioned it may not be amiss to Halt with a proper Front to the Enemy and advise me thereof as I do not know but some position in that part of the Country and on that Road (if the grounds are favourable) would be the best for us to assemble In." Washington included a sketch to show McDougall "in what manner the Enemys Camp, ours & you lay that you may form some Idea of the matter," but it is not present and has not been located. He also appended a postscript: "Since writing the foregoing I find that Gabriel Shulers is not upon the Skippack Road & therefore that you will have to cross from that Road into it."

The series of letters concludes on 25 September, with Washington giving McDougall his final orders for this portion of the campaign. "I was favoured with Yours by the Bearer of this. I wish you to proceed with your Detachment to the best Grounds near Markleys, about Two Miles below Pennibeckers Mill on the Skippack Road & there remain for further Orders. From the present view of things, I think, I shall join you there or somewhere near It, with this Army. Mr Thomas, who has this in charge, says he is well acquainted with the Rout from your present post to Pennibeckers Mill, though he does not know Markley. You will, I am certain, make every necessary inquiry & disposition & keep the most vigilant look out." A postscript indicates that Washington has sent a Map by Mr. Thomas," but, again, this is not present nor located.

McDougall did join the main army—albeit with disappointing strength—without encountering the British about 27 September, probably at or near Pennypacker's Mill, a little to the north of Trappe, which was the initially intended meeting place. The previous day, General Howe, having outmaneuvered Washington, had entered Philadelphia unopposed. Forced to choose between defending the capital and preserving the majority of his supplies—as well as securing the iron-making areas that provided much of the American war materiel—Washington left Philadelphia to the British, who in actuality gained little of value from their occupation. A week after receiving this letter, McDougall and his troops would distinguish themselves at Germantown.

This series of letters, and the autograph missive in particular, convey the vital immediacy of the Revolution and show its principal figure at his labors in the cause of American liberty.