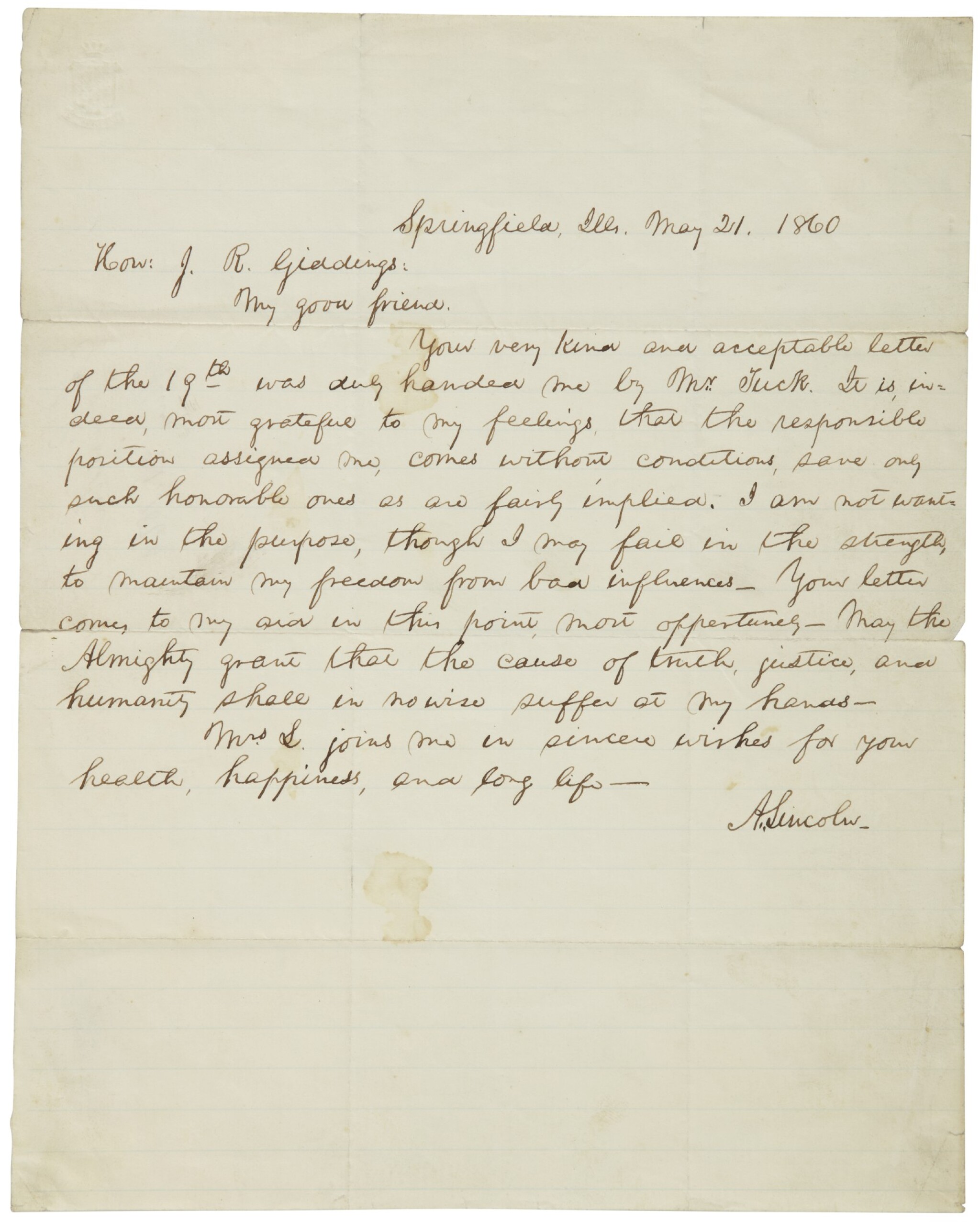 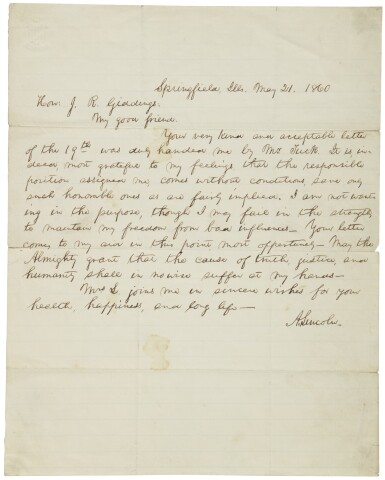 AUTOGRAPH LETTER SIGNED ("A. LINCOLN"), TO JOSHUA REED GIDDINGS, ABOUT HIS HOPE FOR DIVINE ASSISTANCE AS HE BEGINS HIS CAMPAIGN FOR THE PRESIDENCY

Lincoln seeks divine assistance as the Republican candidate for the presidency: "May the Almighty grant that the cause of truth, justice, and humanity, shall in no wise suffer at my hands."

Three days before writing this letter, Abraham Lincoln learned by telegraph that he had been nominated for President by the Republican Party Convention in Chicago. Joshua R. Giddings, an ardent abolitionist who had just retired from the House of Representatives after serving as a congressman from Ohio for more than two decades, wrote a letter of congratulations to Lincoln stating that the latter had secured the nomination because of his honesty and freedom from corrupt men and advising that the candidate should place himself under obligation to no one. Giddings entrusted the letter to Amos Tuck, a former U.S. Representative from Exeter, New Hampshire, who was delivering a speech at Springfield on May 21.

Lincoln here warmly acknowledges Giddings's letter, while expressing some apprehension at the daunting task he faced. "My good friend. Your very kind and acceptable letter of the 19th. was duly handed me by Mr. Tuck. It is indeed, most grateful to my feelings, that the responsible position assigned me, comes without conditions, save only such honorable ones as are fairly implied. I am not wanting in the purpose, though I may fail in the strength, to maintain my freedom from bad influences. Your letter comes to my aid in this point, most opportunely. May the Almighty grant that the cause of truth, justice, and humanity, shall in no wise suffer at my hands." Lincoln closes on a personal note: "Mrs. L. joins me in sincere wishes for your health, happiness, and long life."

The uncertainty evident in Lincoln's wish that he be equal to the task was predicated on the issues that would bring on the dissolution of the Union and Civil War. His election, though, was never really in doubt: with the fractured Democrat Party essentially running three rival candidates (Stephen A. Douglas, Northern Democratic Party; John C. Breckenridge, Southern Democratic Party; and John Bell, Constitutional Union Party) their vote was hopelessly split, and Lincoln swept to an overwhelming Electoral College victory despite polling less than forty percent of the popular vote.

The letters of both Giddings and Lincoln demonstrate that they were unaware of the backroom machinations of Lincoln's campaign managers at the Chicago convention, which included promises of cabinet positions for some of the other contenders for the nomination. Giddings himself benefited from Lincoln's election; the President appointed him as U.S. consul general in Canada, a position he filled until his death at Montreal in May 1864.

Collected Works of Abraham Lincoln, ed. Basler, 4:51–52 (text from the retained draft in the Lincoln Papers, with the recipient's copy unlocated)