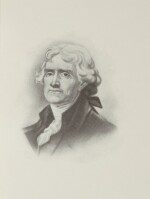 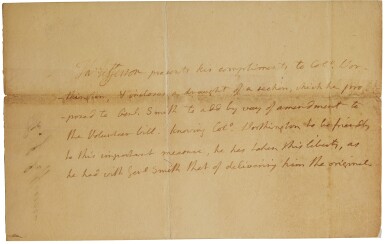 AUTOGRAPH LETTER SIGNED, IN TEXT, AS PRESIDENT ("TH: JEFFERSON"), TO SENATOR THOMAS WORTHINGTON, LOBBYING FOR SUPPORT FOR CONGRESSIONAL REFORM OF THE MILITIA SYSTEM

One page (5 x 8 in.; 128 x 202 mm) on a slip of wove paper, [Washington, ca. 31 January 1807]; browned and a bit faded, silked with remnant of earlier transparent tape repair. Accompanied by a photolithograph portrait of Jefferson.

The unmilitary Thomas Jefferson eventually came to realize that some measures for defense were indispensable. This letter finds him lobbying for support for a measure introduced by Senator Samuel Smith of Maryland to make the state militias more responsive to national interests. Smith's proposal was soundly defeated by opponents of further centralization of power, and in response Jefferson drafted an amendment to the bill, which he references here. Smith, who served in both the Revolution and the War of 1812, was himself a general in the Maryland militia. He confided to Jefferson that he doubted Congress would ever tamper with the existing militia arrangement. In 1808, however, Congress did agree to effectively double the size of the regular Army.

"Th: Jefferson presents his compliments to Colo. Worthington, & incloses a draught of a section, which he proposed to Genl. Smith to add by way of amendment to the Volunteer bill. knowing Colo. Worthington to be friendly to this important measure, he has taken this liberty, as he had with Genl Smith that of delivering him the original."

During Jefferson's tenure as president, Thomas Worthington was instrumental in securing Ohio's admission to the Union. He served as one of the state's first senators and later was elected to two terms as governor.