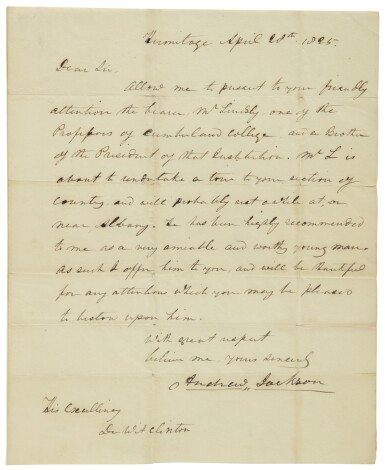 Jackson introduces a professor from Tennessee to the Governor of New York. "Allow me to present to your friendly attention the bearer Mr. Lindsley, one of the Professors of Cumberland College, and Brother of the President of that Institution. Mr. L is about to undertake a tour to your section of the Country, and will probably rest a while at, or near, Albany. He has been highly recommended to me as a very amicable and worthy young man. As such I offer him to you, and will be thankful for any attention which you may be pleased to bestow upon him."

Jackson served as a trustee of Cumberland College for many years, and may have played a role in bringing Philip Lindsley—a distinguished classicist who had been serving as acting president of Princeton—to the presidency there. One of Lindsley's first acts was to change the name of the institution from Cumberland College to the University of Nashville. The school closed in 1909, finding it increasingly difficult to compete with Vanderbilt.