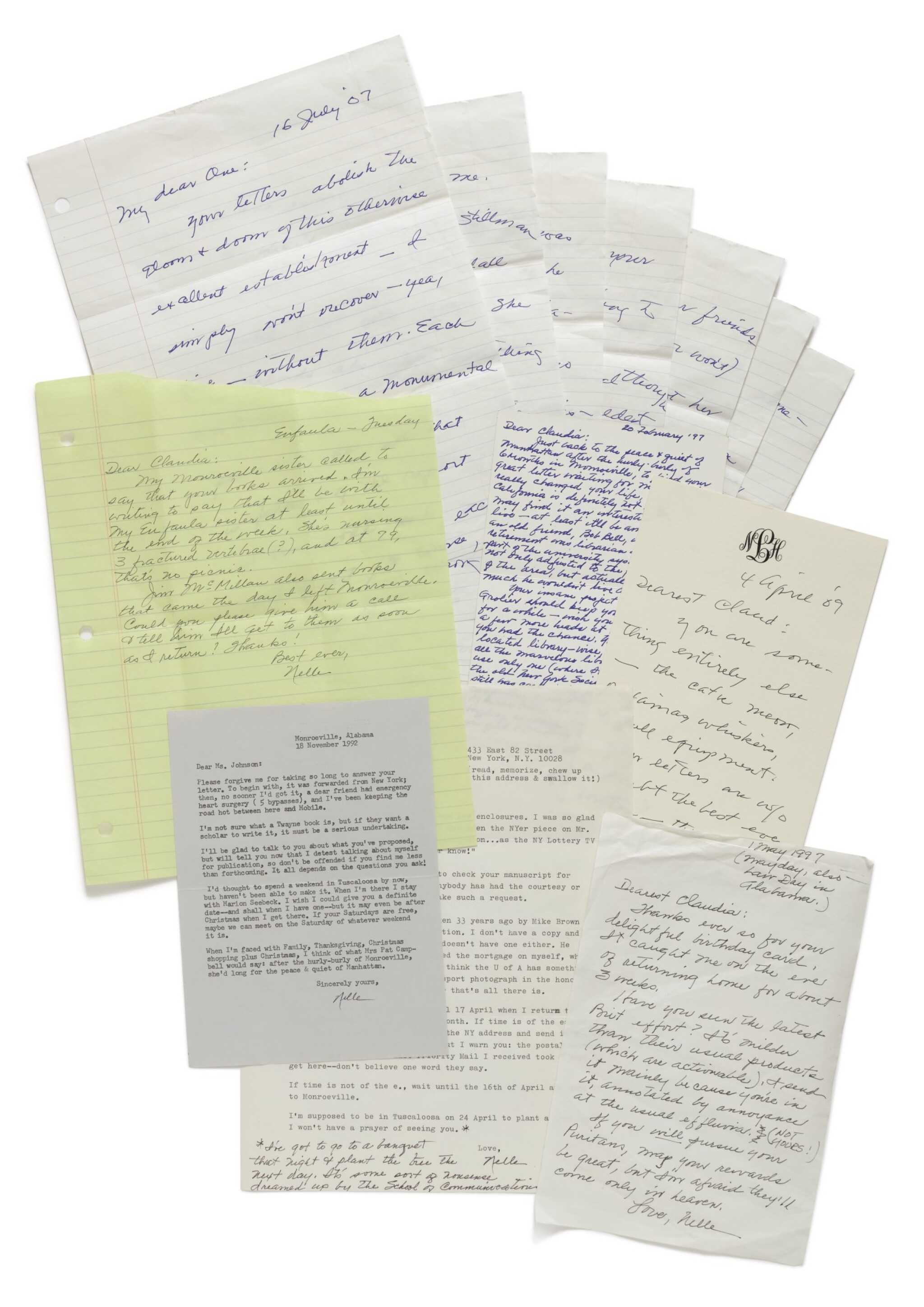 Together, 21 autograph letters, 5 typed letters, and 3 inscribed Christmas cards, all signed ("Nelle"), comprising 47 pp., various sizes, New York, Monroeville Alabama. and other places, 18 November 1992–17 May 2009; 24 autograph and typed envelopes — with: photocopy of Johnson's 12-page chronology of Lee's life and career, with numerous autograph annotations by Lee, and signed by Lee and Johnson — also with: the Arts & Books section of the Daily Telegraph, London, 12 April 1997, featuring a lengthy article on Lee by Michael Shelden, extensively annotated in red ink by Lee; vertical and horizontal folds.

Harper Lee's revealing autobiographical notes and letters to Claudia Durst Johnson, "the one friend who can be depended upon to understand what it means to be Harper Goddamn Lee."

Harper Lee's friendship with literary scholar Claudia Johnson began in 1992 when Johnson was starting to work on a study of the author. The two women quickly established a rapport and Lee not only wrote frank personal letters to Johnson, but also provided biographical details to facilitate Johnson's critical studies. In 1994, Johnson published To Kill a Mockingbird: Threatening Boundaries and in 2018, Reading Harper Lee: Understanding To Kill a Mockingbird and Go Set a Watchman.

Of great interest is a copy of the newspaper article "The Writer Vanishes" by Michael Shelden, published in the Daily Telegraph in 1997 and annotated by Lee in vivid red ink. Where Shelden brings up rumors about Lee's sexuality, Lee writes in the margin, "I am not, never was, & never will be a lesbian." She denies that she plays golf every day, noting that she hasn't raised a club in fifteen years. Her most telling annotations concern Truman Capote and the authorship of In Cold Blood. Where Johnson is quoted in the article saying that some of Lee's notes went directly into the book, Lee appends a long note, which reads in part, "This is not quite right. Joint authorship was never intended. Our friendship didn't turn sour because of that, but because for the last 12 or 15 years of his life, T. seemed hell-bent on trying to destroy everyone who had ever loved him …. I suppose drugs & booze made him obviously psychopathic, but the seeds were always there, even in early childhood. So T. turned out not to be Dill, after all."

Sometime in the early 1990s, Johnson sent Lee a 12-page "Chronology of Nelle Harper Lee's Life and Times." Next to this designation, Lee has written "or Truman Capote's?? Aside from Kansas we actually saw little of each other in our adult lives, and almost nothing of each other in the last 15 years or T.'s life. Our interests were quite different!" She goes on to deny the stories that the two, as children, wrote stories on an old typewriter in a tree house. She corrects what she considers to be "flights of fancy" by Capote biographer Gerald Clarke. According to Lee, the setting of Other Voices, Other Rooms is not based on Monroeville, but on a town in Louisiana. She also comments on the the film version of To Kill a Mockingbird and on stage versions of the novel.

Harper Lee's letters to Claudia Johnson are also a rich source of information on Lee's attitudes toward a number of things, with special emphasis on her ambivalent relationship with Monoreville, Alabama, and its inhabitants. She refers to her hometown as "the hated place". In a letter of 2 July 2002, she writes, "If it were not for [her sister] Alice, I'd never go there again, Aside from a few friends, I hate the people. The Snopses are in full throttle there. It's amazing what 3 generations of growing prosperity and declining education can produce: Snopses from the courthouse to the White House."

Lee felt more at home with "the peace and quiet of Manhattan" than in Monroeville. On 20 February 1997, she wrote to Johnson from the New York Society Library "which still has card-index files. If they go to computers, guess I'll have to quit. The NY Public (where I was educated) now is baffling, annoying, and wretched. How do you find something that's not on a computer?"

In 2001, Johnson was asked to give a talk about Mockingbird in Chicago. Lee gave her blessing and wrote, "Thank God it's not some little shit from U. of Va., N. C. or somewhere else 'Southern' making his superiority over his audiences the main feature of his address. Golly, how I despise young academics."

In December 2006, Dean Robert F. Olin wrote to Lee inviting her to attend an "Arty Party" at the University of Alabama to meet Mrs. Louise Schwartz of the Truman Capote Trust. The Trust was giving $76,000 for scholarships in creative writing at the school. In a paragraph annotated by Lee with two large exclamation marks, Dean Olin wrote, "Mrs. Schwartz was pleased to consider that the Truman Capote Literary Trust's presence at The University of Alabama symbolically reunites Mr. Capote with you and honors the friendship and careers of two Alabamians who changed the literary landscape of this nation." Lee forwarded the letter to Johnson, telling her to "keep this one for your H. L. archive!" She goes on to write, "Can you believe the nerve of these people? I don't know why, at this late date, they want to make Truman respectable. I guess it's because they've been living off him since his death in 1984. Guess money will buy anything — the easiest purchase is a university dean."

In one of the last letters in the collection, written from an Alabama nursing home, Lee comments on Barack Obama: "The newspaper news is all I get & I'm frankly tired of reading of Barack the Boy Genius. He is nice but is too nice of a nice thing."

The Harper Lee/Claudia Johnson archive is an invaluable source of biographical information.