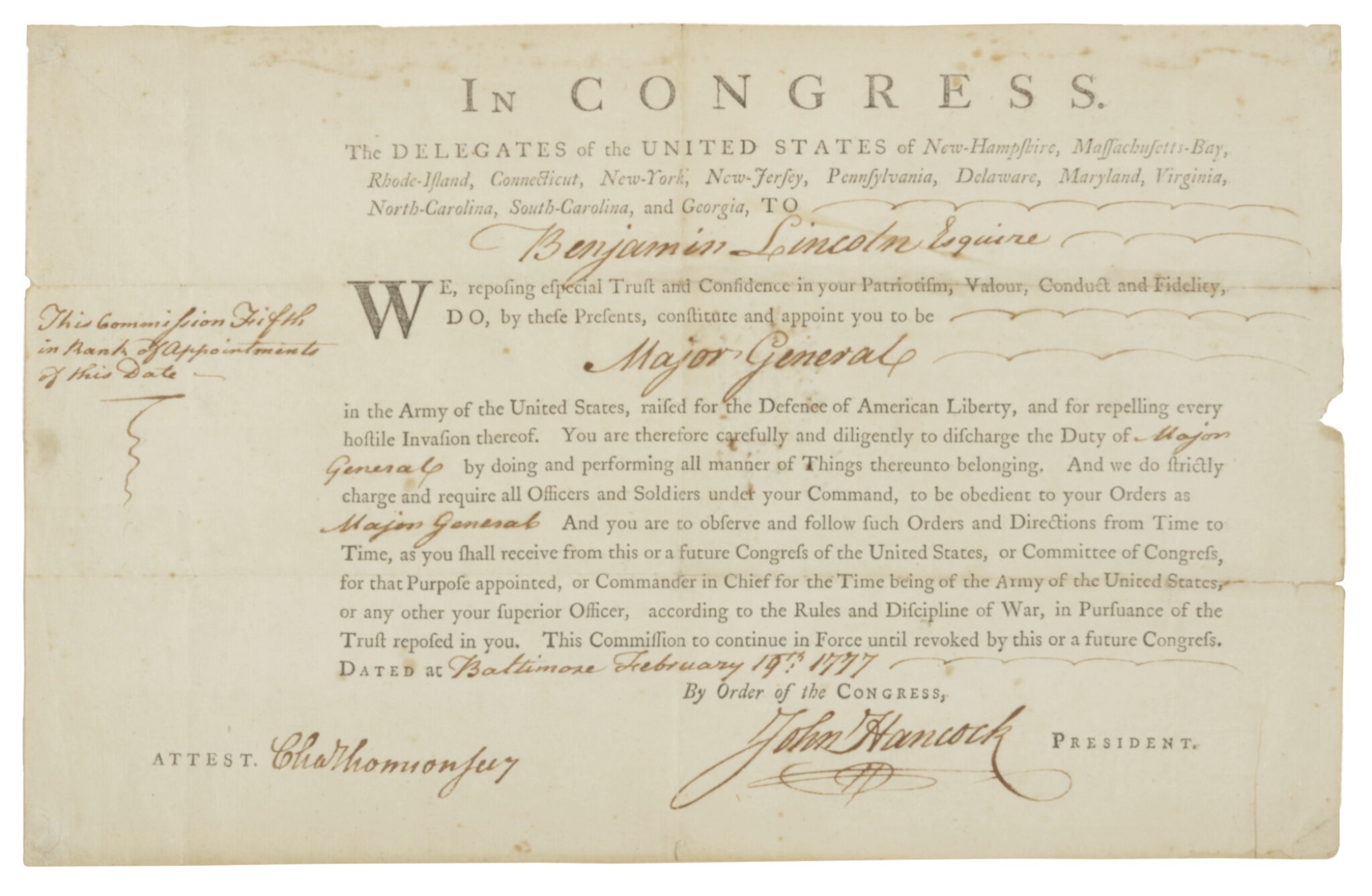 Partly printed broadside document (8 5/8 x 13 1/2 in.; 218 x 344 mm) on laid paper, accomplished in a neat clerical hand, countersigned by Charles Thomson as Secretary of Congress, endorsed in left margin "This Commission Fifth in Rnk of Appointments of this Date," docketed by Lincoln on verso. "Witnessed as Major General Continental Feby 19th 1777"; tipped to an old mounting leaf, some light staining, chiefly marginal, a few fold separations, two tiny marginal chips. The consignor has independently obtained a letter of authenticity from PSA that will accompany the lot.

The Continental Congress commission as Major General issued to Benjamin Lincoln: the most significant Continental Army appointment in private hands and one of the most consequential made during the course of the Revolution, with a particularly fine example of Hancock's iconic signature.

Lincoln's commission dates from the brief period that Baltimore served as the capital of the fledgling nation and may have been printed by Mary Katherine Goddard. The commission reads: "The Delegates of the United States … , to Benjamin Lincoln Esquire We, reposing especial Trust and Confidence in your Patriotism, Valour, Conduct and Fidelity, Do, by these Presents, constitute and appoint you to be Major General in the the Army of the United States, raised for the Defence of American Liberty, and for repelling every hostile Invasion thereof. You are therefore carefully and diligently to discharge the Duty of Major General by doing and performing all manner of Things thereunto belonging. And we do strictly charge and require all Officers and Soldiers under your Command, to be obedient to your Orders as Major General And you are to observe and follow such Orders and Directions from Time to Time, as you shall receive from this or a future Congress of the United States, or Committee of Congress, for that Purpose appointed, or Commander in Chief for the Time being of the Army of the United States, or any other superior Officer, according to the Rules and Discipline of War, in Pursuance of the Trust reposed in you."

Lincoln was recommended for his commission by George Washington himself. He came to Washington's attention because of his skill in organizing and leading often poorly trained and equipped militiamen, particularly during the actions around New York City in the summer and autumn of 1776.

Of the five major generals commissioned on 19 February 1777—the others were Thomas Mifflin (Quartermaster General, resigned 1779), Arthur St. Clair, William Stirling (Lord Stirling), and Adam Stephen (dismissed from service after Germantown, October 1777)—Lincoln had by far the most consequential and distinguished career. He was given command of the southern theater, but was forced to surrender Charleston to General Henry Clinton. At the expiration of his parole, he joined the Franco-American siege of Yorktown and was given the honor of accepting the sword of surrender from British General O’Hara, after Cornwallis proved to be indisposed.

After Yorktown, Lincoln served as Secretary of War for two years. He returned to militia service in 1787 to help quell Shays's Rebellion, and the following year he was a delegate to the Massachusetts ratification convention.