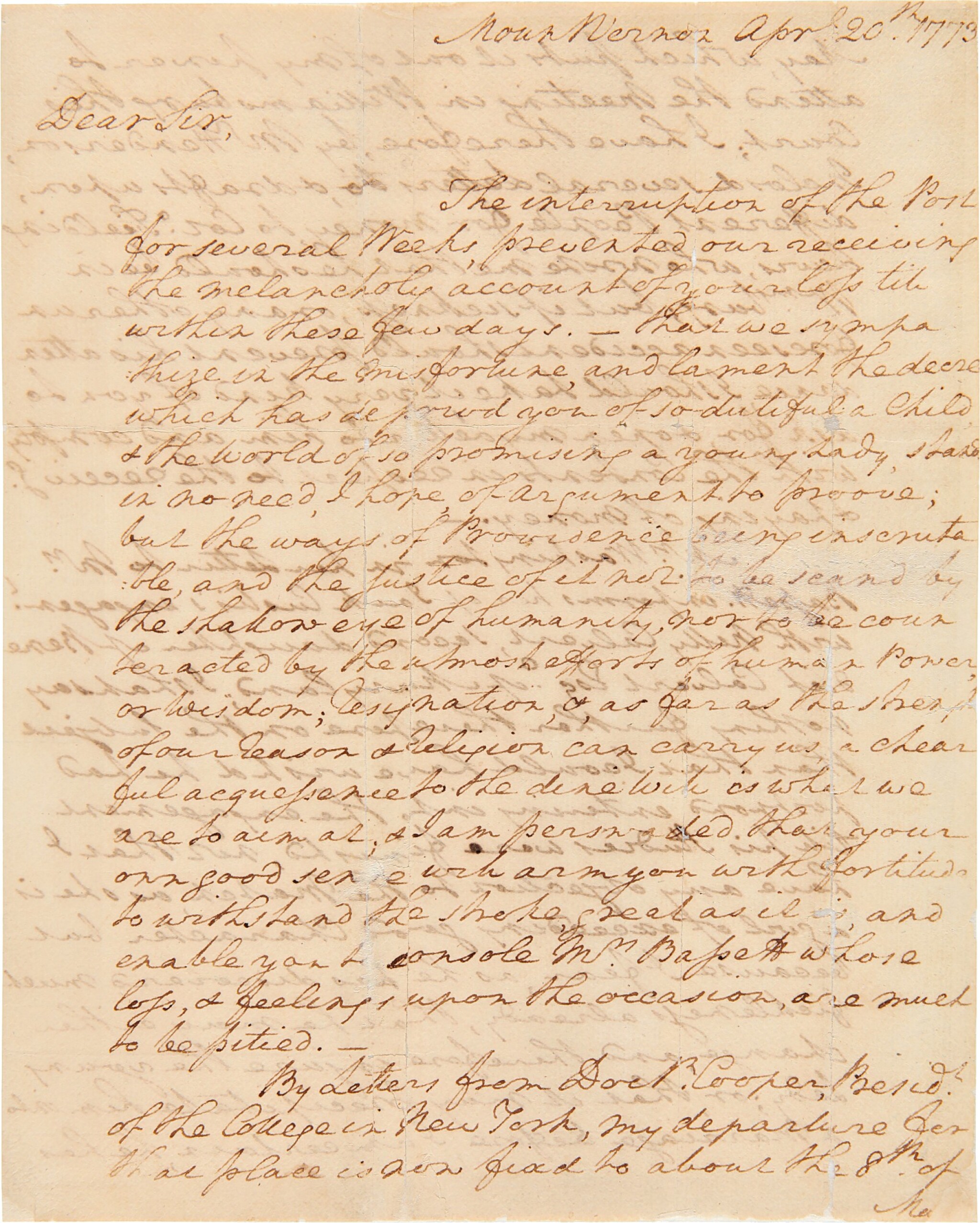 Autograph letter signed ("G. Washington"), to Burwell Bassett, offering condolences on the death of his daughter, and discussing news of the engagement of John Custis to Eleanor Calvert

A moving letter written by George Washington at Mount Vernon to Col. Burwell Bassett in 1773, the year before he attended the First Continental Congress as a delegate for Virginia.

Bassett was a friend of Washington's and was also married to one of Martha Washington's sisters, Anna Maria Dandridge, thus making their families very close. Washington writes primarily in this instance to console the Bassetts on the loss of their daughter, Elizabeth: "[W]e sympathize in your misfortune, and lament the decree which has deprivd you of so dutiful a Child, & the World of so promising a young Lady, stands in no need, I hope, of argument to prove; but the ways of Providence being inscrutible, and the justice of it not to be scand by the shallow eye of humanity, nor to be counteracted by the utmost efforts of human Power, or Wisdom; resignation, &, as far as the strength of our reason & religion can carry us, a cheerful acquessence to the d[iv]ine will is what we are to aim at: and I am perswaded that your own good sense will arm you with the fortitude to withstand the stroke, great as it is and enable you to console Mrs Bassett whose loss, & feelings upon this occasion, are much to be pitied."

Washington also discusses business with Bassett, informing him that his journey to New York to enroll his stepson John Parke Custis in King's College precludes him from attending to relevant matters in Williamsburg, Va.: "By Letters from Doctr Cooper, Presidt of the College in New York, my departure for that place is now fixd to about the 8th of May, which puts it out of my power to attend the Meeting in Williamsburg this Court; I have therefore, by Mr Henderson, Inclosd several Letters to, & drafts upon, different People for money, to Colo. Fielding Lewis, who wrote me that he should be in Wmsburg..."

Lastly, Washington takes the opportunity to inform Bassett of the engagement of Custis to Eleanor Calvert, of whose timing he does not entirely approve: "Mrs Washington in her Letter to Mrs Bassett informs her of Jack Custis's engagemt with Nelly Calvert, Second daughter of Benedict Calvert Esqr. of Maryland; I shall say nothing further therefore on the Subject than that I could have wish'd he had postpond entering into the engagement till his Studies were finishd..." Washington's fears were well founded, as Custis dropped out of King's College by the end of 1773, and married Calvert in Febrary 1774. When Custis died at the age of 26 in 1781, after falling ill at the battle of Yorktown, he did so at Bassett's estate. The spring of 1773 was generally a terrible season for both the Bassetts and the Washingtons, as just three months after the death of Elizabeth Bassett, Martha Washington's youngest daughter, Mary Parke Custis, also died suddenly.

An excellent letter that demonstrates the close relationship between George Washington, Burwell Bassett, and their families, and one that sheds light on the trying period that both families were experiencing at the time.