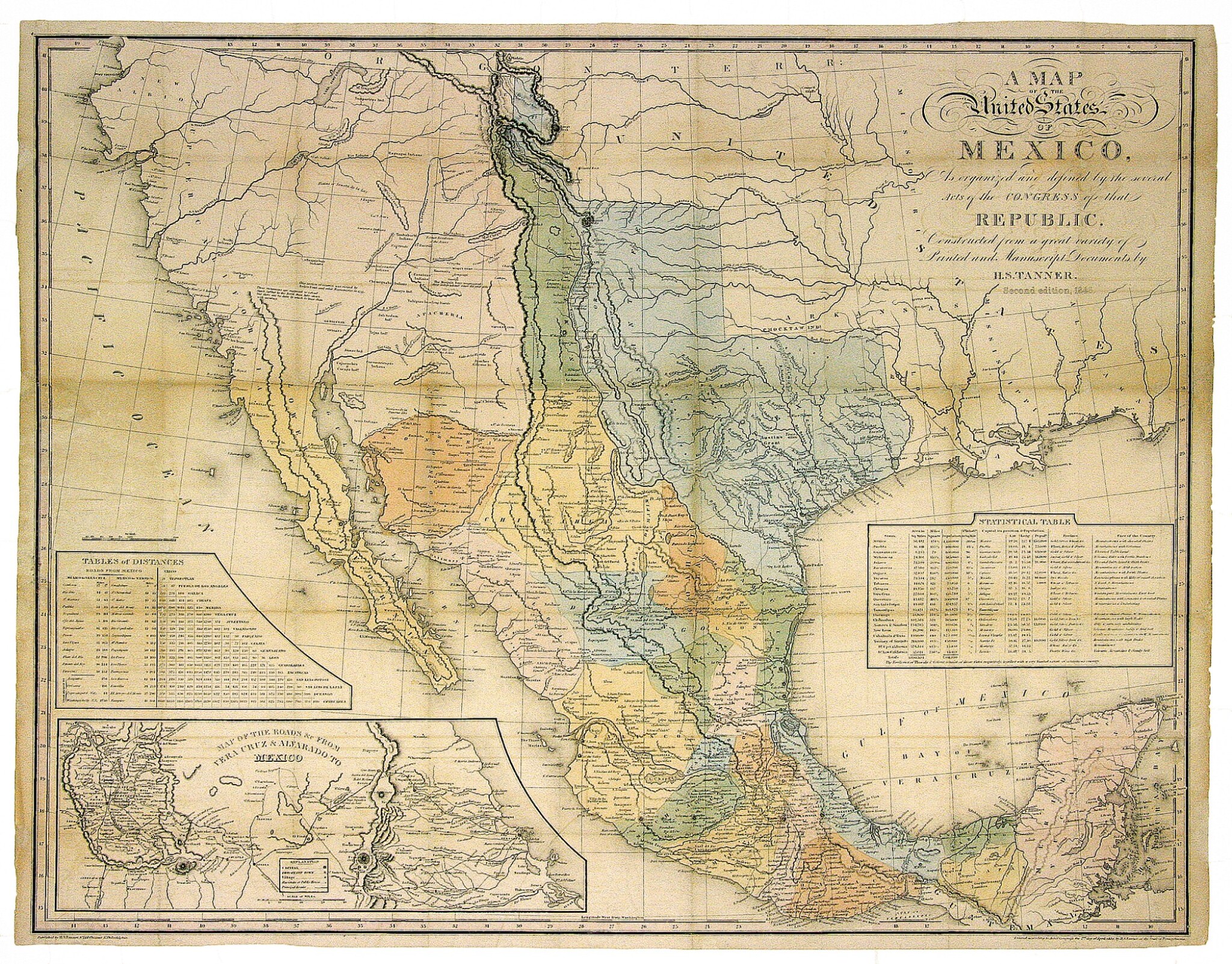 A Map of the United States of Mexico, as organized and defined by the several acts of Congress of the Republic...Second edition, 1846. Philadelphia: H.S. Tanner, 1846

An important map of Mexico and the southwestern United States, depicting Texas in its largest form — the "Second edition" of the celebrated Tanner map

﻿The present map embraces all of modern Mexico and the southwestern United States of America, and prominently features the new American state of Texas with its original extensive boundaries. H.S. Tanner, of Philadelphia, was one of the most esteemed American mapmakers of the first half of the nineteenth-century. His 1822 "Map of North America" was one of the most influential of the period. In 1825, he excerpted and enlarged the portion of the map pertaining to what was a newly-independent Mexico, which then included the entire American southwest. Tanner's map effectively became the definitive source map for the region. It was brazenly copied in the White Gallaher & White map of 1828, which in turn directly inspired the famous Disturnell map of 1846, the "Treaty map" initially used to consider the re-demarcation of the international border following the Mexican-American war.

Walter Ristow noted that Tanner produced the first edition of the United States of Mexico map in 1825, and furthermore cited that he "issued 10 variants of one or another of five states" of the map up to 1847. The present map is officially termed as the "1846, second edition", although it is actually the seventh variant of the map to be issued, according to Ristow's classification. It closely follows the "1832, second edition," even including the "April 2nd, 1832" copyright imprint in the lower right corner. At this time, interest in all matters relating to Mexico and Texas amongst the American public was at an all-time high, and it is thought that Tanner hastily prepared this edition in order to capitalize on the commercial opportunities. Tanner did not take the time to avail himself of the most recent geographical advances, and consequently this map is a fascinating cartographic hold-out during a time of unprecedented change.

Texas is portrayed as an enormous Mexican state, although it had since 1832 seceded, and later joined the Union as an American state. Its massive territory extends far to the north and west of its modern limits, following the eastern band of the Rio Grande up to its headwaters, up into the "stovepipe" to a point touching the 42nd parallel. The geographical detailing of most of Texas is quite accurate, as Tanner was well apprised of Stephen F. Austin's surveys, a point underscored by his inclusion of 'Austin's Colony' in east-central Texas. In an improvement to it antecedent, the western portion of the state owes its form to William Emory's map of 1844. The depiction of what is now modern Mexico is quite advanced, in light of Alexander von Humboldt's exhaustive charting of the country.

At this time, Tanner elected not to include information from Charles Frémont's groundbreaking map of 1845, based on his own discoveries. The coastline of Alta California still maintains a mythical quality, void of most actual details such as San Francisco Bay, but is replete with imaginary details such as the Buenaventura, Los Mongos, Timpangos, and San Felipe Rivers. The interior regions extending all the way into what is now Colorado are shown to be almost completely unknown. A curious prophetic detail is the demarcation of a boundary line between Alta and Baja California, although located to the south of the international border that was to be set in 1848. The map includes a detailed inset depicting the key travel route from the port of Veracruz to Mexico City, the same path taken by U.S. forces during their successful attack on the Mexican capital in 1847. In the spirit of the times, the map also includes two statistical tables, one of distances and the other of population and geographical details of individual states. Tanner, wishing to update this map, produced a "third edition" later that same year that included Frémont's discoveries.