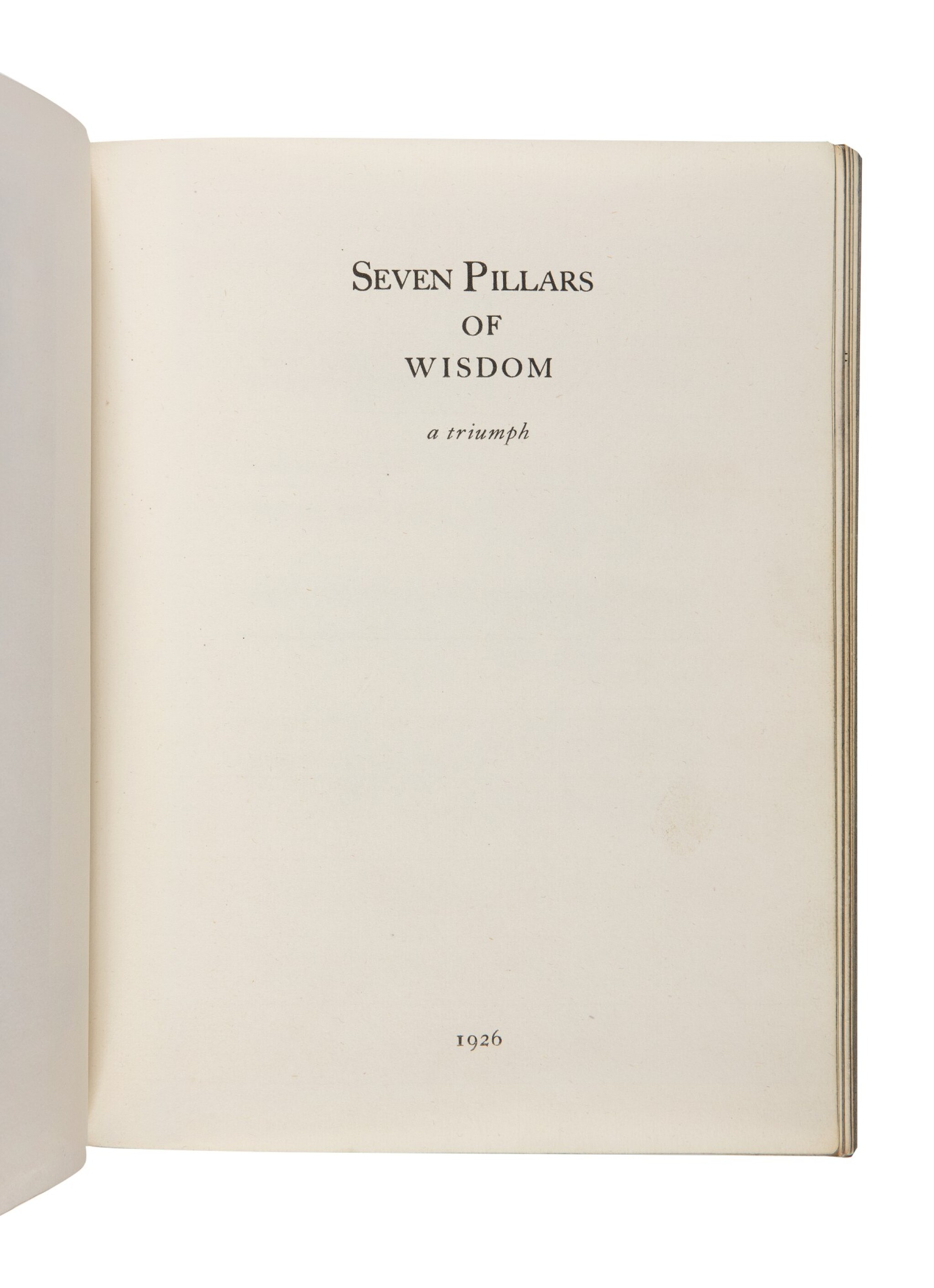 4to (235 x 178 mm). Proof copy bound without the 66 plates, pictorial endpapers, and folding maps found in regular copies, leaves trimmed by the binder from the regular size (253 x 190 mm), text leaves the same as in regular copies with woodcut text illustrations and decorative initials (some illustrations and initials poorly printed), those at the beginning of each book printed in red, rare woodcut by Blair Hughes-Stanton illustrating the dedicatory poem of the Subscriber's Edition pasted to verso of front free endpaper with its blank margins trimmed but printed on heavier stock than the india proof paper used in the four recorded copies bearing it, accompanied by a printed "Sketch Map" of the Near East on thin card which appears in larger format at the end of Revolt in the Desert; a few minor marginal spots. Original black pigskin, specially bound for the author, edges black, plain white paper endpapers, in a russet morocco folding-case, title gilt-lettered on upper cover and spine, "Proof Copy / August 1926" gilt-lettered on spine, by Sangorski & Sutcliffe; extremities rubbed. [With, in mylar envelopes:] Jacob Schwartz, typed note to Mr. Bray, 3 February 1963, with extract from the Texas Quarterly (see below) and the "Sketch Map"; torn at fold.

The author's own proof copy of the subscriber's edition of Seven Pillars, later given by him to George Bernard Shaw's wife, Charlotte, "one of the architects" of the book.

This copy is one of 9 proof copies noted in a Lawrence manuscript "History of Seven Pillars" (printed in facsimile in Texas Quarterly, 5:3 [Autumn 1962]) in which Lawrence has a column of "Proofs: sets of spoiled," with a list of 9 recipients including himself "A/c Shaw." The bookseller H. M. Mushlin (in a letter to Dr. Tovee of 19 August 1963) traces this copy's provenance: "This copy which is reputed to be T.E.L.'s copy, was bought by an America[n] dealer, resident for many years in England, named Dr. Jacob Schwartz. ... He purchased this copy with a great deal of [George Bernard] Shaw material and sold the volume to Stanley Bray, managing director of Sangorski and Sutcliffe. ... When the University of Texas issued the enclosed magazine [the Texas Quarterly noted above], Schwartz wrote the enclosed to Stanley [see below] and also enclosed the piece torn from the magazine which is enclosed herewith."

The note Schwartz sent to Stanley Bray is dated 3 February 1963: "Dear Mr. Bray, This article may interest you. Opposite page 51 is a small note by T.E.L. of the proof copies. You have the one to G.B.S. that I sold you" [included in the lot].

Mushlin's letter to Tovee continues: "The internal evidence of the truth of this statement is that all of the 4 copies of the nine [proof copies] I have seen were untrimmed in rough paper wrappers. This copy was obviously bound for use and, as plain as the binding is, betrays Lawrence's guidance in choice of style and material. Pigskin was almost invariably his choice; and the cutting down to make it easier to refer to any particular page; and this was a practical utility binding of useful size and shape. G.B.S. had a set of sheets which he corrected very heavily and also punctuated. When these sheets had been returned [he speculates erroneously here], the chances are that T.E.L. sent him this copy to replace it as the only one at hand. ... When Stanley Bray bought the 'Proof' [the present copy] he just put it away. He recalled it to mind when Jake Schwartz sent him the note and piece torn from the Texas Quarterly. A few months later, he wanted a considerable sum for some private purpose, he offered to sell it to me if I did not let anyone know he had sold it. I agreed, but ask you to keep this information private."

This claim was later confirmed by the Lawrence biographer Jeremy Wilson based on evidence in the correspondence. According to Wilson, Lawrence gave this proof copy to Charlotte Shaw before he left for India at the end of 1926 but asked her to send it to him. When he returned in the spring of 1929, he gave it back to Charlotte who wanted a trimmer copy to read during a trip to Italy. Before giving this copy to Charlotte, Lawrence had to retrieve it from one of Sir Herbert Baker's partners (St. Ledger) to whom it had been loaned; Baker was Lawrence's friend and landlord in Westminster where he wrote the second and third drafts of the book. In a letter of 12 April 1929 Lawrence promised Charlotte: "Of course you shall have the cut-down S.P. and any other S.P. you want! You were one of the architects. I hope St. Ledger will bring it round to you in time." Lawrence apparently fulfilled his promise and this volume remained part of the Shaw collection purchased by Schwartz.