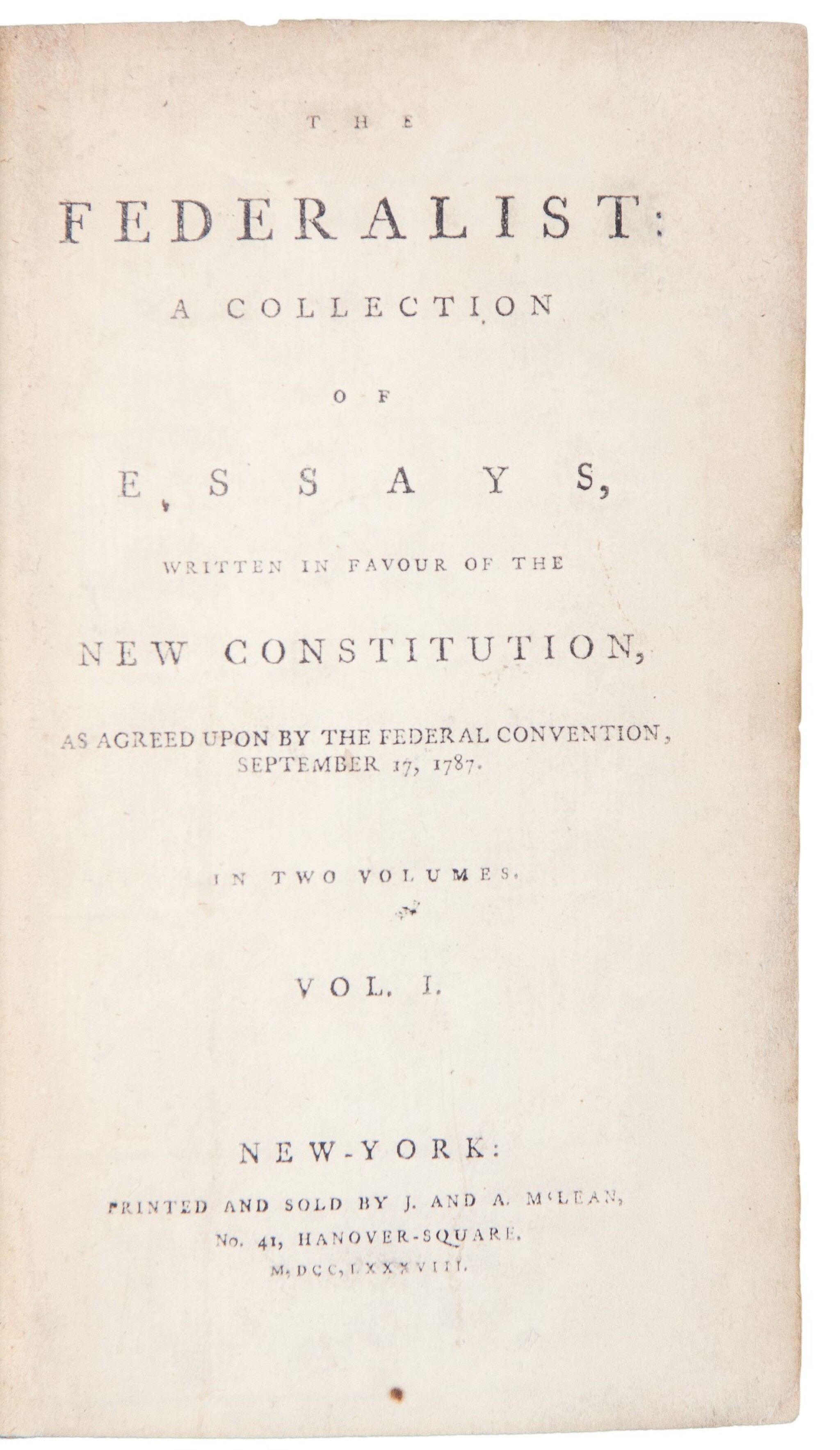 The Federalist: A Collection of Essays, written in favour of the new Constitution, as agreed upon by the Federal Convention, September 17, 1787. New York: Printed and sold by John and Andrew M'Lean, 1788

﻿The first edition of The Federalist comprises the first collected printing of the 85 seminal essays written in defense of the newly-drafted Constitution. The essays were first issued individually by Alexander Hamilton, James Madison, and John Jay in New York newspapers under the pseudonym "Publius" to garner support for the ratification of the Constitution. This first collected edition was published in early 1788: Volume I, published in March, contains the first 36 numbers; Volume II, published in May, includes the remaining 49, together with the text of the Constitution. Upon its publication, George Washington noted to Alexander Hamilton that the work "will merit the Notice of Posterity; because in it are candidly and ably discussed the principles of freedom and the topics of government, which will always be interesting to mankind" (George Washington, letter to Hamilton, 28 August 1788).

The genesis of this "classic exposition of the principles of republican government" is to be found in the "great national discussion" which took place about the ratification of the Constitution, and the necessity of answering the salvos in print from the Anti-Federalists and other opponents of a strong Federal government (Bernstein, Are We to be a Nation? 242). The original plan was that James Madison and John Jay were to help Hamilton write a series of essays explaining the merits of their system, whilst also rebutting the arguments of its detractors. "Hamilton wrote the first piece in October 1787 on a sloop returning from Albany...He finished many pieces while the printer waited in a hall for the completed copy" (Brookhiser Alexander Hamilton: American 68-69). In the end, well over half of the 85 essays were written by Hamilton alone. Despite the intense time pressures under which the series was written "what began as a propaganda tract, aimed only at winning the election for delegates to New York's state ratifying convention, evolved into the classic commentary upon the American Federal system" (McDonald, Alexander Hamilton: A Biography 107).

The Federalist is without question the most important commentary on the Constitution, the most significant American contribution to political theory, and among the most important of all American books. Thick paper copies are rare and desirable and largely done for presentation. George Washington's deluxe thick paper copy sold at Sotheby's in 1990 for $1,430,000.