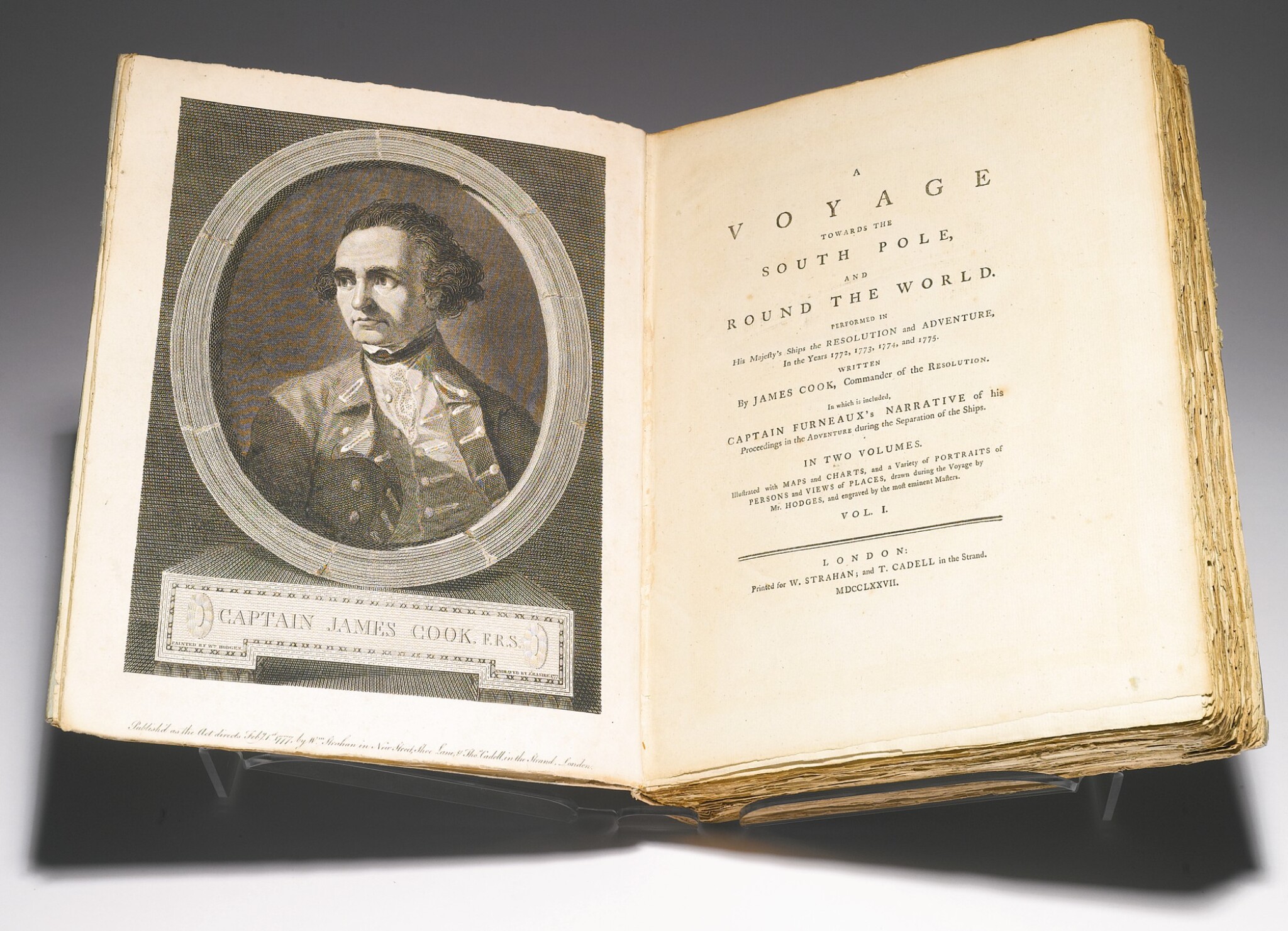 A superb collection of the official accounts of Captain Cook's first, second and third voyages, cumulatively the most important printed record of Pacific exploration

3 works in 8 4to volumes and one folio atlas volume, comprising:

¶ John Hawkesworth. An Account of the Voyages Undertaken by the order of His Present Majesty for Making Discoveries in the Southern Hemisphere. London: W. Strahan and T. Cadell, 1773

First edition, second issue, containing the "Chart of the Straight of Magellan" and the "Directions for Placing the Cuts and Charts" not found in the first issue. The official account of the first voyage prepared by Hawkesworth, also containing narratives of Byron, Wallis and Carteret.

First edition. Cook's own account of his second voyage prepared for the press by Dr. John Douglas while Cook was on his third (and last) voyage.

¶ James Cook & James King. A Voyage to the Pacific Ocean. Undertaken, by Command of His Majesty, for Making Discoveries in the Northern Hemisphere. London: Printed by W. & A. Strahan for G. Nicol and T. Cadell, 1784

First edition. The official narrative of Cook's final voyage, including his landings on the Hawaiian Islands, where he was killed in February 1779. The first two vols. were taken from Cook's own journals; the third, which describes Cook's death and the journey home, was written by James King.

All 9 volumes uncut in original buff paper over blue-gray boards, manuscript paper spine labels; several volumes sympathetically rebacked, most early on but the atlas and a couple of others more recently. Housed in uniform half brown morocco folding-cases.

A first edition set of the official accounts of all three voyages undertaken by the most celebrated navigator in Pacific history, profusely illustrated with more than two hundred large engraved plates, maps, and charts, mostly folding. In European Vision and the South Pacific, Bernard Smith writes, "No voyage undertaken in the days before photography ever returned so well documented with pictorial illustrations. … From the cold south in Kerguelen's Land to the cold north in Nootka Sound, John Webber [the official artist of the third voyage] drew plants, animals, peoples and landscapes with all their geographical variety—shamans, fetishes, human sacrifices, native masks, Chinese sampans, winter huts in Siberia, temples in Macao, New Zealand cannibals, South African Hottentots, Cook Islanders, Society Islanders, Hawaiians."

An extraordinary copy in near-original condition with unusually fresh impressions of the plates.