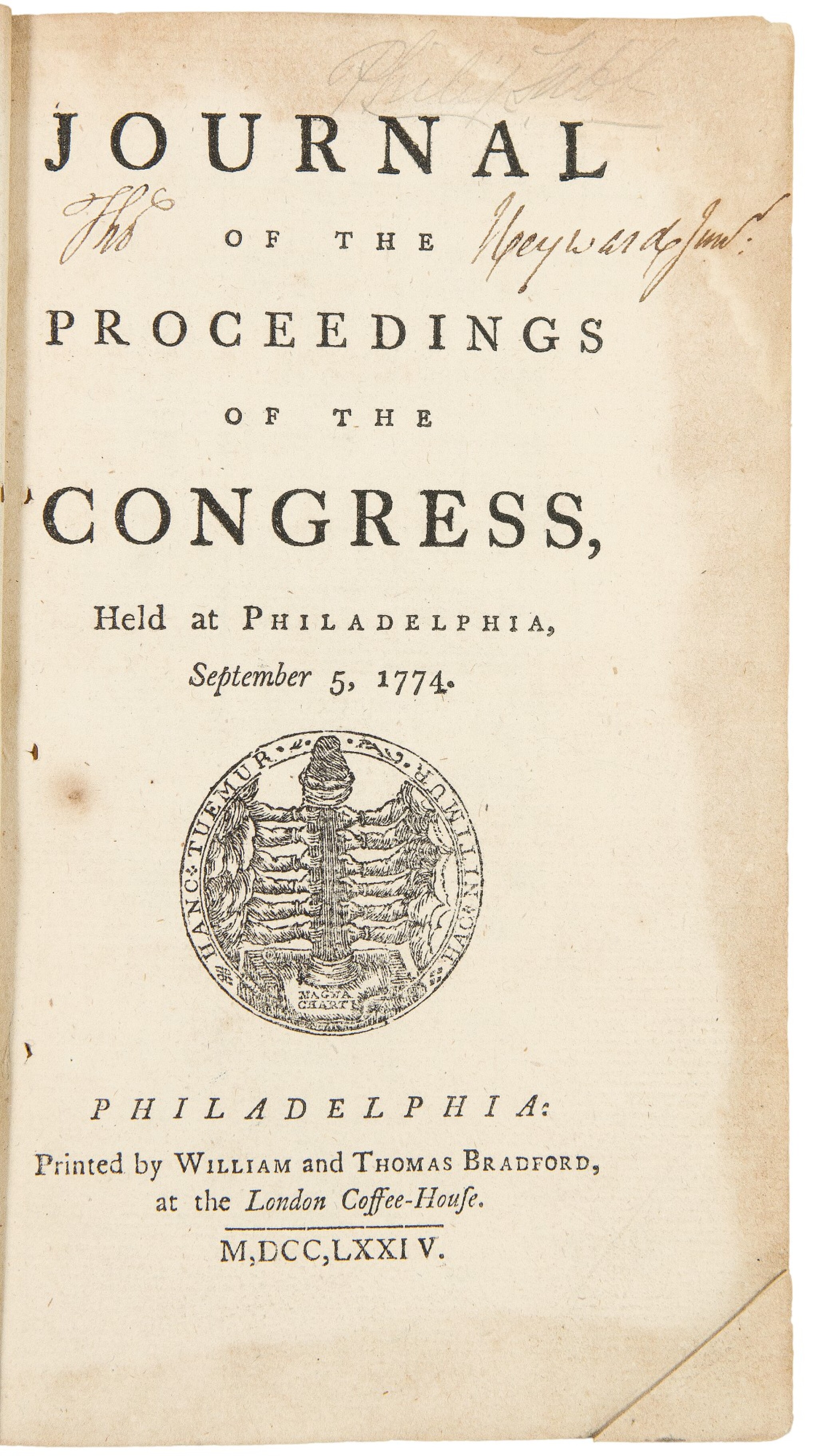 Two volumes in one, 8vo (197 x 114 mm). [First Congress:] Half-title, woodcut circular vignette on title, the seal of the Congress with twelve hands supporting a column with a liberty cap on top and the magna carta at its base, surrounded by the motto Hanc Tuemer, Hac Nitimur. First issue. [Second Congress:] Half-title, woodcut circular vignette on title representing three military figures supporting a monument titled Libert. Patr. Contemporary manuscript numerical notations in the margins. First issue, without the names of Hancock or Thomson on p. 239. Contemporary calf; expertly rebacked to style.

The very rare first editions of the journals of the first and second Continental Congresses — Thomas Heyward Jr.'s copy, Signer of the Declaration of Independence from South Carolina

﻿Committees of Correspondence, responding to the Intolerable Acts passed by Parliament in the wake of the Boston Tea Party, resolved to hold a Continental Congress in June of 1774. Delegates from twelve colonies (none from Georgia) gathered in Philadelphia in the fall. It included many of the most distinguished men in America: Samuel and John Adams, Roger Sherman, John Jay, Joseph Galloway, John Dickinson, Richard Henry Lee, George Washington, Edmund Pendleton, and Henry Middleton, among others.

The Journal of the first Continental Congress, describes meetings from 5 September to 20 October 1774. The Congress succeeded in taking numerous important steps. On 14 October, they adopted a Declaration of Rights, and agreed to an Association governing imports and exports and boycotting British goods. They also drafted and sent an Address to the People of Great Britain and another Address to the Inhabitants of the Province of Quebec. The journal of the second Continental Congress covers its activities from convening on 10 May 1775 through adjournment on 5 September 1775. The activities of that summer, against the background of open conflict in Massachusetts, are among the most dramatic of the Revolutionary era. Included are reports concerning Lexington-Concord, the address to the inhabitants of Canada inviting them to join the other thirteen colonies, numerous military matters, the Declaration of the Causes and Necessity for Taking Up Arms, the Olive Branch Petition, the American negotiations with the Six Nations, and other crucial material.

"Together, they are among the most basic documents of the American Revolution" (Reese).