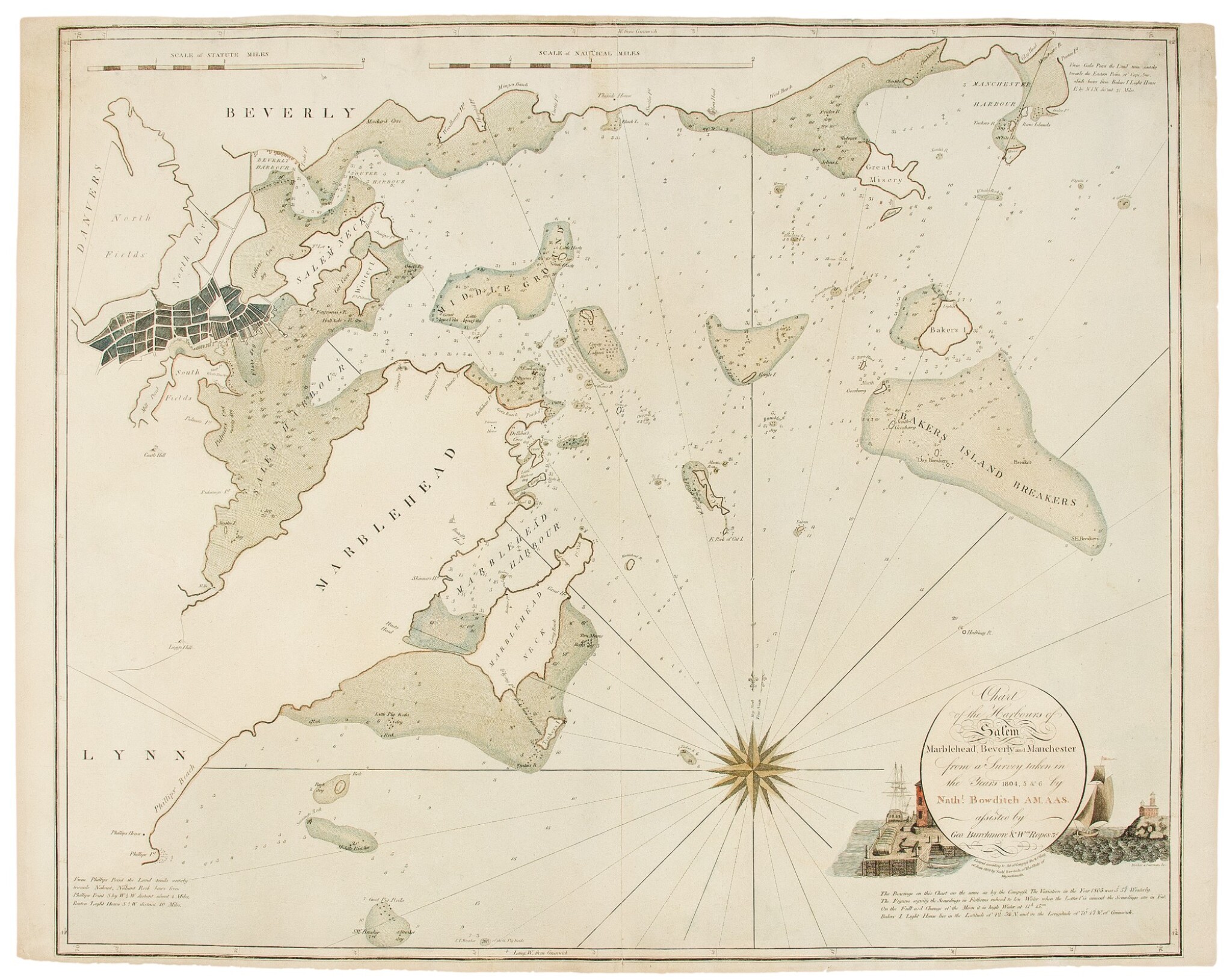 The true first edition of Bowditch's famed chart of the coasts of Salem, Beverly, Marblehead and Manchester

﻿Bowditch's separately-issued chart—the first accurate chart of harbors of Salem, Marblehead, Beverly and Manchester—was among the earliest nautical charts based on first-hand surveys by an American to be published in the United States. Born in Salem, Massachusetts, the son of a local cooper and shipmaster, at a young age Nathaniel Bowditch was apprenticed to a local ship chandlery. Practical sailing experience combined with his studies of astronomy made Bowditch one of the best navigators in America. In 1799, publisher and chartseller Edmund Blunt hired Bowditch to revise John Hamilton Moore's New Practical Navigator. Bowditch added much in the way of additional information to the work and contributed so much in the way of revisions, that Blunt decided to completely redo the book, publishing it in 1802 with a new title and with Bowditch listed as the author. Bowditch's American Practical Navigator would prove a fundamentally important work on the art of navigation, with scores of tables and diagrams, and a wealth of practical information, becoming known as the Seamen's Bible.

Around the time of the first publication of Bowditch's Navigator, while serving as the President of the Essex Fire and Marine Insurance Company, it became evident that the existing charts of the waters around Salem and Marblehead were deficient. In a rare, separately-published 30-page text of sailing directions to accompany the present chart, Bowditch writes: "The only chart of the entrance of the harbours of Salem, Marblehead, Beverly and Manchester, is that published from the survey taken by Holland and his assistants, just before the American revolutionary war. That period was particularly unfavorable for obtaining an accurate survey of the sea-coast, as the Americans were generally opposed to its being done at that time, fearing that it would give the British the great advantage of being able safely to enter with their armed ships into any of our harbours. In consequence of this, Holland received but little assistance from our pilots, in exploring the sunken ledges and shoals off our harbours; and as it was almost impossible to discover them without such assistance, they were generally omitted by him. This deficiency renders those charts in a great degree useless, though they are accurate as respects the bearings and distances of the islands and the coast. From the time of Holland's survey, till the year 1794, nothing was towards obtaining a more accurate chart. In that year a general survey of the state was ordered by the legislature; but it is to be regretted that this survey was not directed to be made in a manner calculated to ensure accuracy in the execution of it...the laudable intentions of the legislature were very imperfectly carried into execution; and the map...was such as was to have been expected."

He continues by describing his first-hand surveys to produce this chart by himself, assisted by George Burchmore & William Ropes III: "To do this an excellent theodolite, made by Adams, furnished with a telescope and cross wires, was procured to measure the angles and a Rood chain to measure the distances. With these instruments, the bearings and distances of the shore from Gales point in Manchester, to Phillips point in Lynn (the two extremities of this survey) were carefully ascertained; and the necessary observations were taken for fixing with accuracy the situation of the islands. Soundings were taken throughout the whole extent of the survey, particularly round the dangerous ledges and shoals, several of which were explored, that were hardly known by our best pilots...most of which were so little known, that names had not been given to them; and during the whole time employed on the survey, which was above eighty days, from two to five persons were hired to assist in sounding and measuring. From these observations the new chart was plotted off, and an accurate engraving of it made, &c."

Bowditch's original copperplate has survived and is located in the Peabody Essex Museum. Its survival, however, has resulted in later restrikes, as early as a second edition in 1834 (with additions by Charles M. Endicott listed in seven lines of text below the compass rose) but including others into the 20th century. However, the present first edition of the chart, without the Endicott additions and on paper watermarked 1804, is extremely rare. We find no other examples of the first edition chart on the market, and with only three institutional holdings (Boston Athenaeum, Boston Public Library, and Harvard).