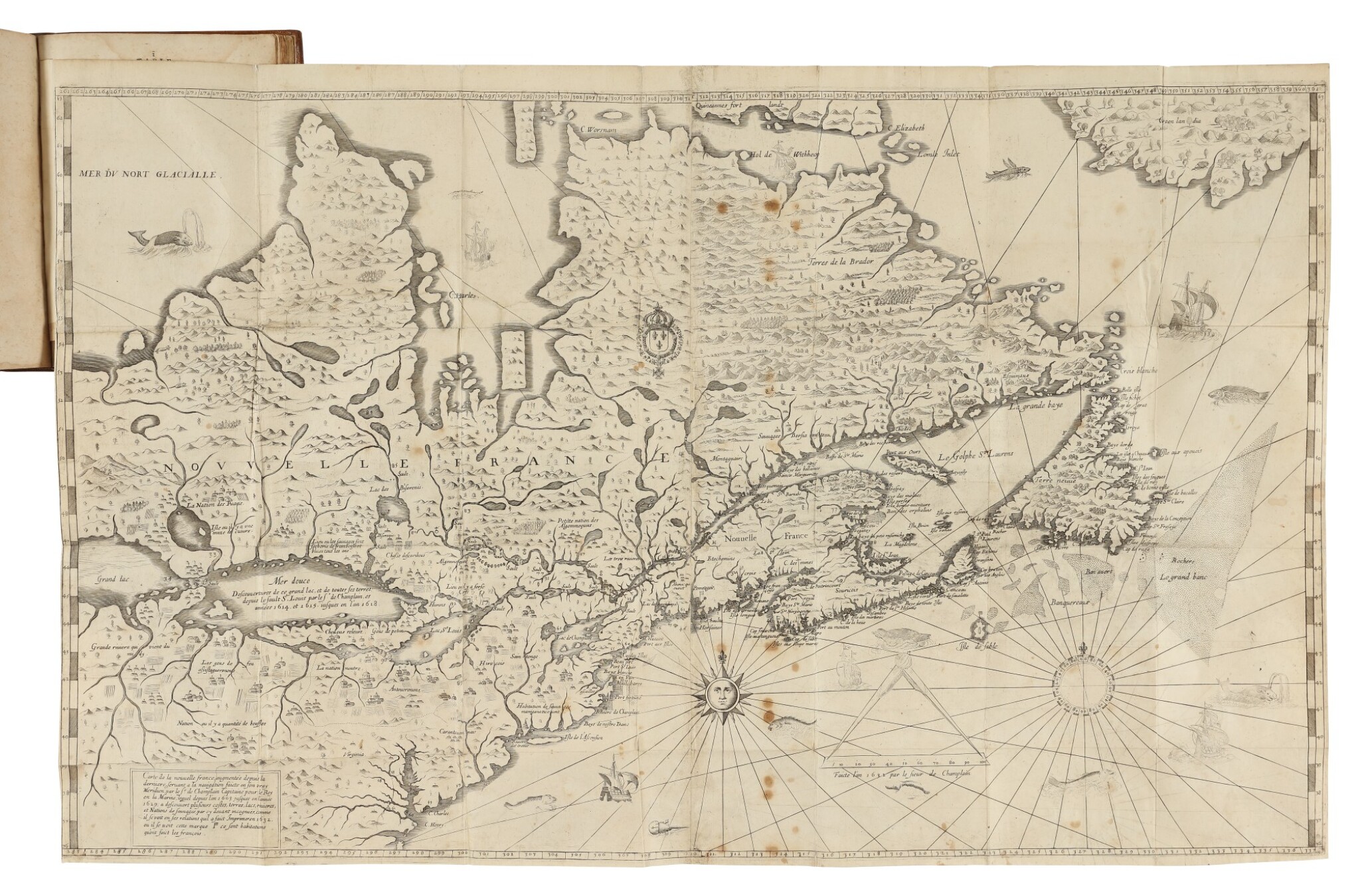 3 parts in one volume. 4to (225 x 160 mm). With the rare double sheet engraved map Carte De La Nouvelle France 1632; small tear near the gutter, one long but unobtrusive repaired tear across the top half, a little light spotting. With 6 engravings in the text, one large woodcut map and one woodcut text diagram, with numerous woodcut head-pieces and initials; some light foxing and browning, scattered light spotting, very faint dampstains to upper margins of many leaves, but only occasionally affecting text, some small stains on G4-H3 of part I obscuring up to 7 letters, marginal repairs to T4 of part I and G3 of part II, the latter affecting the text with 9 letters supplied in facsimile, 3 tiny wormholes to Z1 & 2 of part II, affecting 10 letters. Contemporary gilt-ruled calf with gilt arms of Claude Du Sauzay, Seigneur de Varennes and Conseiller du Roi on covers (Olivier 2383), spine with raised bands in five compartments, second gilt-titled, others with gilt double rule and device; covers lightly skinned, joints rubbed, ends of raised bands exposed.

The final collected edition of Champlain's voyages, "Perhaps the most important of the old editions" of Champlain (Church)

A primary work encouraging the colonization of New France, with the rare folding map—the first to depict the entire Great Lakes chain and the first indication of New York City on a map.

This issue has the cancelled leaves D2-3 replacing the offensive passage regarding Richelieu. The work was published to promote the claims on New France in Louis XIII's court at a critical time, as France was seeking to legitimize its claims in North America. It describes all of the preceding French expeditions as well as Champlain's own nine voyages to the New World, with a history of Canada from 1619 to 1632 and a treatise on navigation and another on the Algonquin language (both bound in at the end in this copy, the latter not always present).

"This work gives us the first accurate accounts we have of the Indians of the interior of the present State of New York. The most remarkable event in Indian history was caused by Champlain's first visit to the shores of the lake bearing his name. In a conflict between the two named races of savages, he gave the victory to his friends the Abnaquis, by the use of his musket. The Iroquois never forgave the injury, and thousands of Frenchmen were slaughtered to avenge it. The Six Nations always fought with the English against their enemies, and twice nearly destroyed the French colonies with their warriors alone" (Field 268, Sevestre imprint).

The map covers the same territory as Champlain's earlier cartographic landmark of 1616, but in much more exact detail in land features. Fischer believes the change in focus is primarily away from the map as a sea chart for navigation, with more emphasis placed on the land to encourage colonization, with French settlements and missions all carefully marked. The present map extends as far south as the Virginia colonies. Here the Hudson is called "Riuere des trettes" and Long Island "Isle de l'Ascension."  South of this a church can be seen, "clearly an indication of the Dutch presence in the region and [it] must be construed as the first delineation of present day New York City on a map" (Burden).