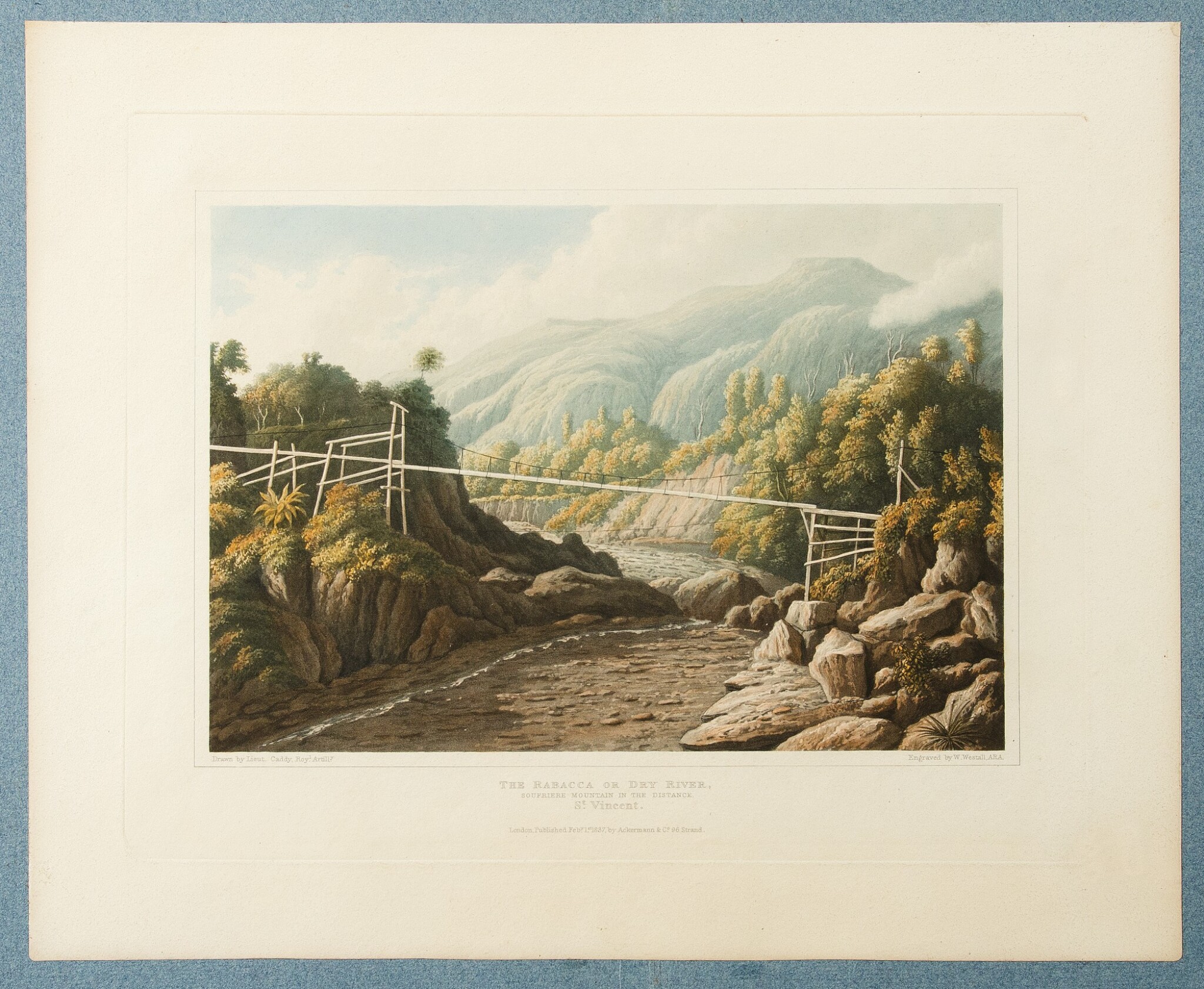 [SCENERY OF THE WINDWARD AND LEEWARD ISLANDS]. LONDON: ACKERMANN & CO., 1837

3. The Old Crater of the Soufriere / St. Vincent. [Engraved by W. Westall]

11. The Rabacca or Dry River / Soufriere Mountain in the distance / St. Vincent. [Engraved by W. Westall]

"John Herbert Caddy was born into a family of military engineers. His grandfather had been sent to Newfoundland in the 18th century to build a fort. In about 1796 his father left Kent, England, for a posting in Lower Canada and in 1808 was transferred to the garrison at Fort Malden, Amherstburg, Upper Canada. John Herbert began his schooling at Amherstburg and in 1815 he was sent to England for military training at the Royal Military Academy, Woolwich (now part of London). In March 1816 he was enlisted at the academy as a gentleman cadet in the Royal Artillery and received training as an engineer and cannoneer. Like George Heriot, James Pattison Cockburn, Philip John Bainbrigge, and other English military artists who painted Canadian scenes, Caddy was trained at Woolwich in topographical sketching and painting. Much of his free time was spent at the home of a family friend, Colonel Richard Hamilton, at Woolwich Common. Caddy was commissioned 2nd lieutenant on 29 July 1825 and promoted 1st lieutenant in 1827. In 1828 he married Colonel Hamilton's daughter Georgiana, shortly before he left for duty in Tobago. He returned to England in 1831, but after two years left his family for his second West Indian posting, at St Lucia. In May 1834 he was transferred to St Vincent where he was joined later by his wife and family. Diary fragments describe the social rounds, the hunting, and the sketching which were possible with light military duties. Before he left for St Vincent Caddy had prepared for publication a series of four folios of scenes, largely of the West Indies. The pictures of the first folio were engraved in London and were published in 1837 by Ackermann; the other three folios never appeared" (Dictionary of Canadian Biography).

This suite of plates was issued without text or title (the title above as supplied by Abbey from the lettering on the cover of the binding on his set). The work was published, as a contemporary advertisement reveals, as a suite of "highly colored views" for £3.10.