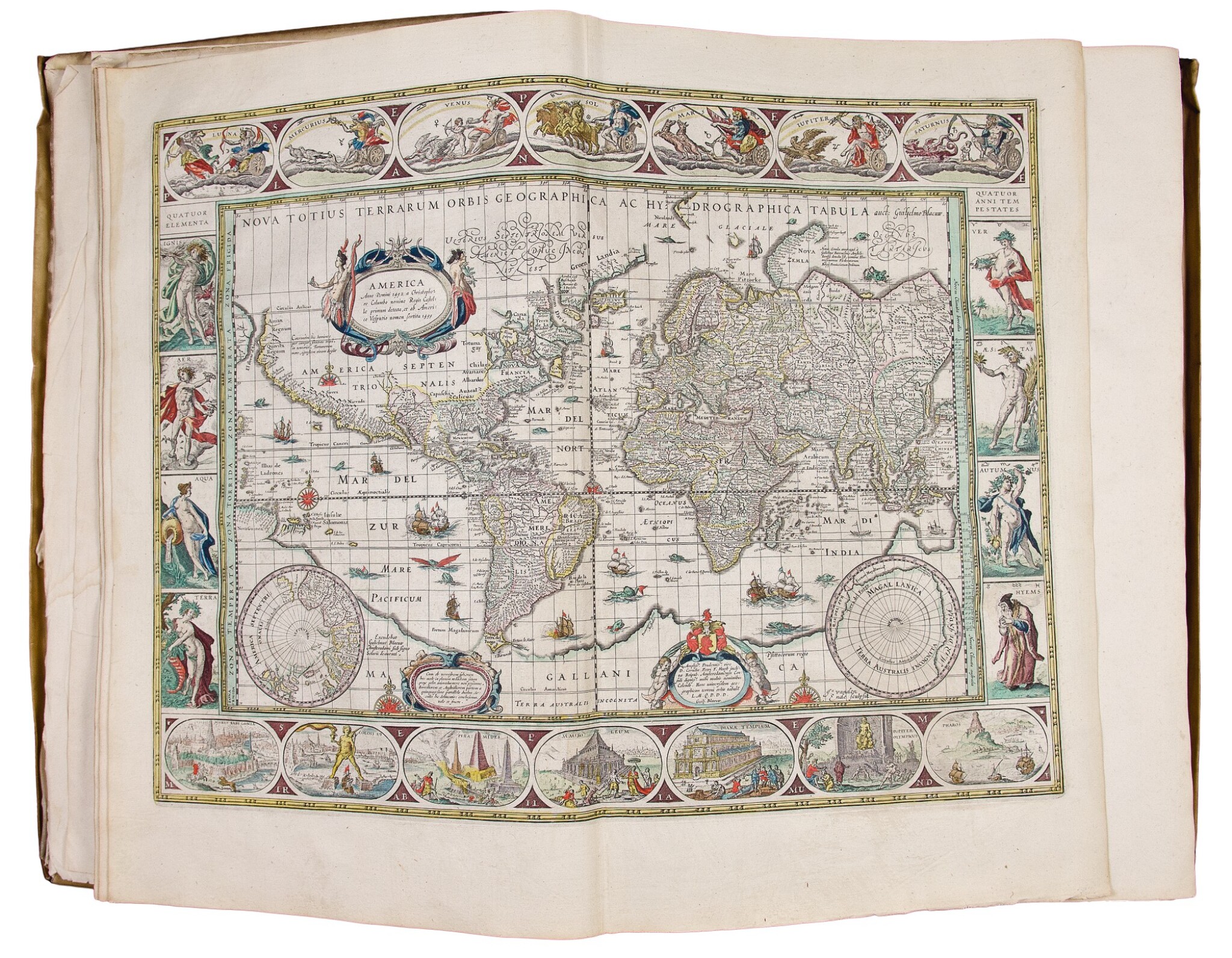 Volume III. Le Theatre du Monde, ou Nouvel Atlas Mis en Lumiere Par Guillaume & Jean Blaeu. Troisieme Partie. Amsterdam: chez Jean Blaeu, 1645. Engraved title-page with title printed on separate slip of paper, laid down, 62 maps (Koeman Bl 35F). Collation is the same as the first French edition of 1640 (Koeman Bl 35A). 58 maps of Italy and four maps of Greece. The register at the end calls for an additional four maps of Great Britain, which had been added as a supplement to the second French edition (also 1640). With the introduction in 1645 of vol. IV, devoted solely to Great Britain, they were removed.

Volume IV. Guil. et Joannis Blaeu, Theatrum Orbis Terrarum, sive Atlas Novus, pars quarta. Amsterdam: apud Johannem Blaeu, 1646. Engraved title page with title printed on separate slip of paper, laid down, 60 maps, several engravings of British antiquities interspersed throughout the text (Koeman B1 42B). "This edition of 1646 is identical with the former [first] edition of 1645" (Koeman Bl 42A). In point of fact, this volume contains two maps, one of Scotland, the other of Ireland, that are not called for in the index. It also varies in that the inlaid title slip is in Latin rather than in French.

In 1630, Willem Janzzon Blaeu, the official cartographer of the Dutch East India Company, published his first world atlas, the Atlantis Appendix, with 60 maps. The second expanded edition, with 99 maps, appeared in the following year. Blaeu continued to produce new maps at such a rate that by 1634, he abandoned the single volume format, and announced his intention to publish a new world atlas, entitled the Theatrum. This atlas, which originally incorporated most of the maps from Blaeu's Appendix, was expanded so rapidly that by 1646, when this version appeared, it consisted of four volumes with 334 maps.

The acclaim that Blaeu's atlas has always received is based primarily upon its exceptional production standards. The quality of the engraving, the paper, and colouring are of the highest order, and place it in the first rank among seventeenth century illustrated books. Of particular note are the famous side-panelled maps of the world and four continents, sixty devoted to Great Britain (Volume IV), the map of the environs of Frankfurt (Volume I), a fine map of China and Japan (Volume III), and a series of thirteen maps of America (Volume III) that includes early and important maps of New England and the Chesapeake Bay.

A remarkable set in the publisher's vellum