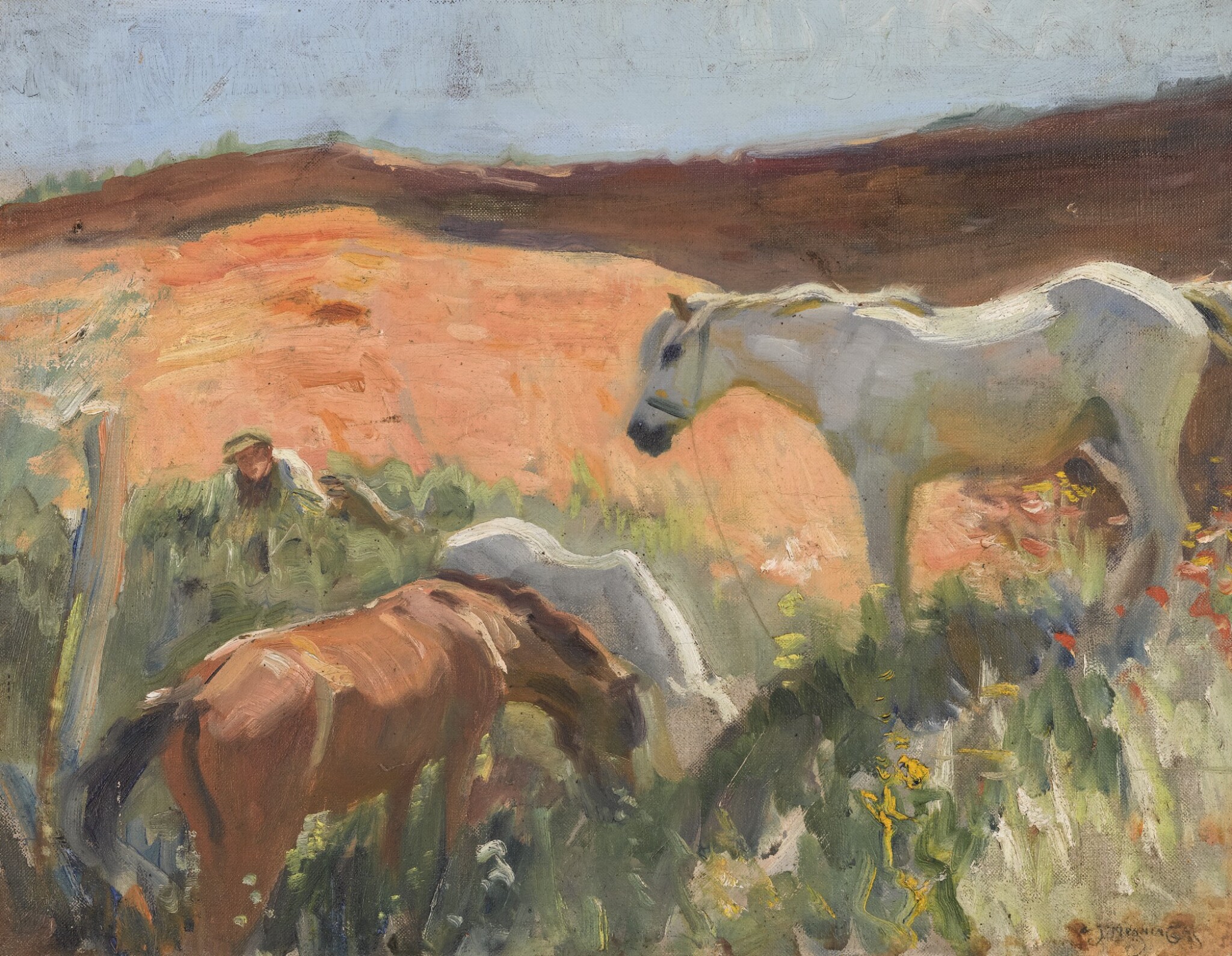 The canvas is unlined and the original canvas is providing a stable structural support for the picture which is in very good condition but should be much enhanced by a surface clean as the paint surface is dirty and discoloured - this could be easily removed by a professional restorer. There are no signs of craquelure and there are areas of rich impasto.

There are no signs of retouching.

The subject of ponies in gravel pits was one that occupied Munnings from 1907 and reached its culmination in 1911 with the large canvas Gravel Pit in Suffolk (Castle Museum, Norwich) which was painted in the hot summer of that year and exhibited at the Royal Academy in 1912. The present picture relates closely to Gravel Pit in Suffolk only differing in the shape of the hillside on the horizon and the omission of the reclining groom. Munnings often worked on two canvases simultaneously ‘a lesser one to make sure, should the weather break, and – weather permitting – the larger work being carried on, too, each getting a spell off to harden. The advantage of such a method is you gain a stride now in this one, now in that’ (Alfred Munnings, An Artist’s Life, 1950, pp.197-8)

The setting is the sand and gravel pits near Spring Farm in Hoxne on the Norfolk and Suffolk border. It was here that Munnings painted a series of pictures, including Ponies in a Sandpit, Ringland Hills of 1911 (The Sir Alfred Munnings Art Museum). The white pony in both pictures is Auguereau, Munnings’ favourite horse which appears in many paintings of this period, often alongside chestnut ponies to emphasise the white of his coat glowing in the intense summer sunlight. Augereau was bought by Munnings from a horse-trader named Drake around 1906. He was named by Munnings after seeing a matinee performance of a play called 'A Royal Divorce' in which a character continuously exclaims, "I swear it on the word of an Augereau."  Driving the pony home after the theatre late at night, whenever the pony misbehaved, Munnings and his groom would correct him and exclaim, "I swear it on the word of an Augereau!". Augereau, wrote Munnings, 'was the most picturesque of white ponies – an artist’s ideal. A white horse has been used in many pictures by many artists. Augereau’s name may go down to posterity as the last of his disappearing race to pose as a model for a picture.’ (Alfred Munnings, An Artist's Life, 1950, p.199) The boy in the present picture was Munnings’ groom ‘Shrimp’ who was described as a young man who ‘slept under the caravan with the dogs, and had no family of his own, no family ties, no parents that he knew. This son of the wild went by the name of Shrimp... little did I dream that he would one day become for me an indispensible model, an inspiring rogue, and an annoying villain... He was a paintable figure... and the best model I ever had’ (op.cit. p. 207, 211, 217).