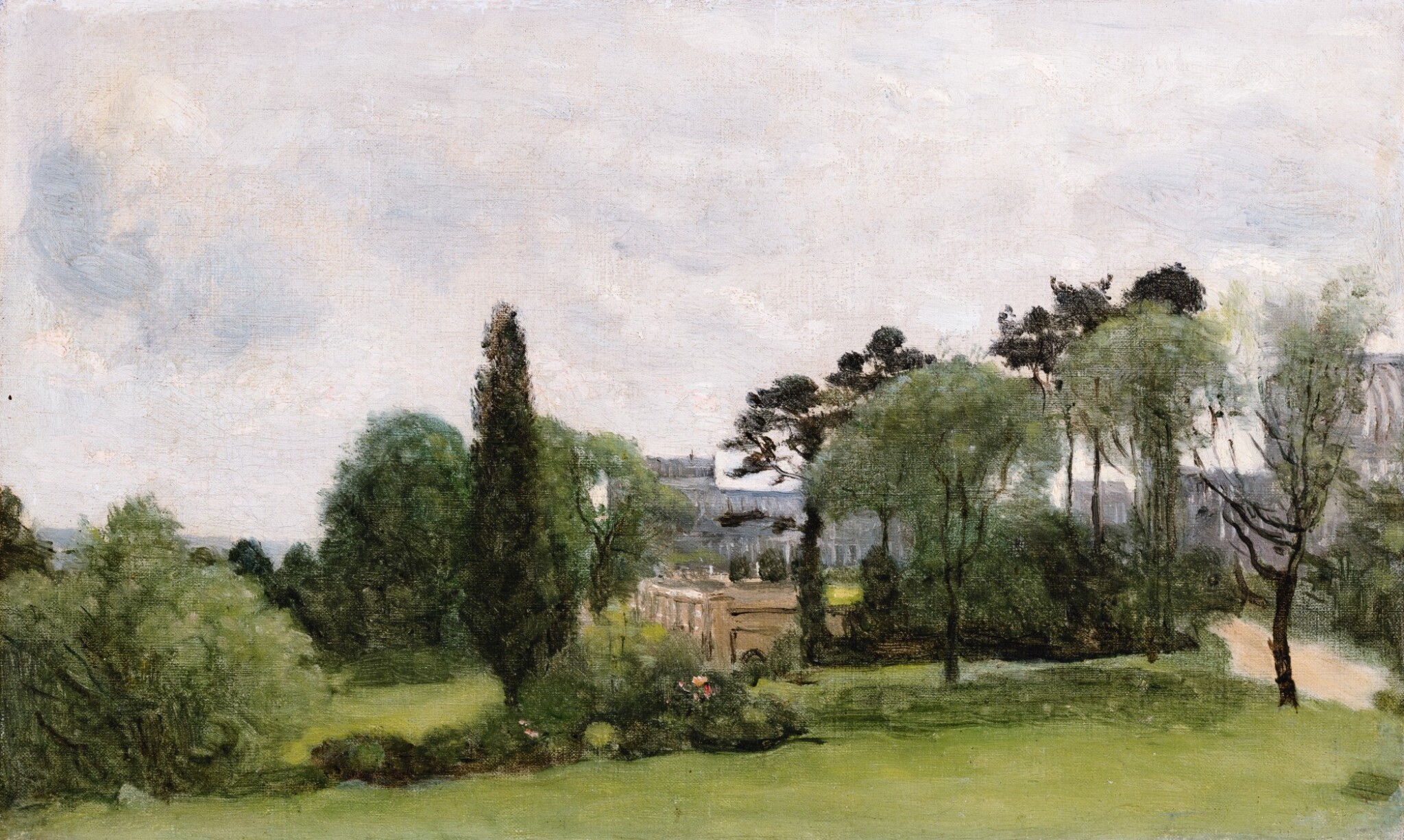 The authenticity of this work has been confirmed by Martin Dieterle and Claire Lebeau.

The canvas has an old relining.

Under close inspection there are some localised areas of minor craquelure, primarily in the thicker pigments of the sky.

Ultra-violet light reveals some minor signs of retouching, notably spots along the upper framing edge, and a few other scattered spots.

This painting is in good condition, and its appearance could be further enhanced with a professional surface clean.

Mlle X (a gift from the artist)

Jacques Guerlain, Paris (purchased from the above in April 1951; by descent until 1971. Guerlain, 1874-1963, was a noted French perfumer, inventor of L’Heure bleue and art collector of work by Corot and the Impressionists, notably La Pie by Claude Monet which now hangs in the Musée d’Orsay)

Acquired by the grandfather of the present owner; thence by descent

This view of the Crystal Palace, painted shortly after its relocation from Hyde Park to Sydenham Hill, is one of just three recorded oils Corot painted during his only trip to London in 1862, the other two being Londres, vu de loin, des bords de la Tamise, and Richmond près Londres (fig. 1).

Built to house the Great Exhibition of 1851 in Hyde Park, the Crystal Palace, designed by Sir Joseph Paxton, was an engineering marvel of glass and iron which occupied seven hectares of ground. The main nave of this impressive structure was 563 metres long and 124 metres wide. It was moved and rebuilt in Sydenham with considerable enlargements between 1852 and 1854, where it survived until destroyed by fire in 1936 (fig. 2).

However, in Corot’s light-filled view the Crystal Palace is largely eclipsed by the majestic trees and shrubs in the foreground, making the painting more of an idyllic landscape than an architectural study. The interjection of the modern world on a traditional landscape of course anticipates Manet and the Impressionists, whose verdant scenes were often punctuated by a factory chimney here or a modern railway bridge there, and express at once a longing for the past and an acceptance of the present.

Of the Impressionists, Camille Pissarro certainly owed the most to Corot, even describing himself as the latter’s pupil. When Pissarro fled France for England in the aftermath of the Franco-Prussian war, he settled in Norwood, south London and, following in Corot’s footsteps, made his own series of paintings of the streets around the Crystal Palace (fig. 3). In them, he took Corot’s nod to modernity a stage further, capturing the hustle and bustle of suburbanisation head on.