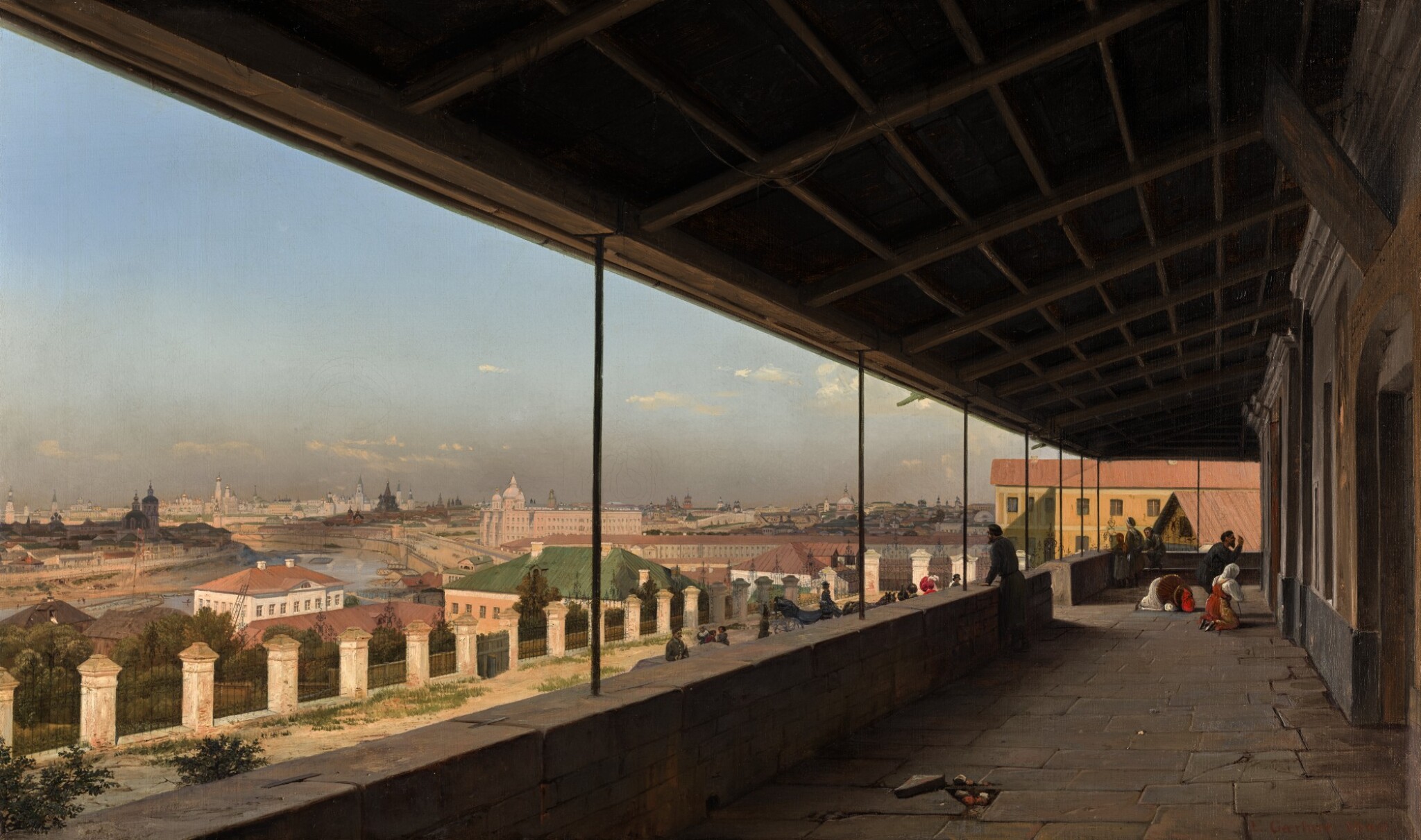 VIEW OF MOSCOW FROM THE CHURCH OF NIKITA THE MARTYR

The canvas has been lined and is securely attached to a keyed wooden stretcher.

Otherwise, this work presents very well, is in very good condition and is ready to hang.

Private collection, Düsseldorf (since circa 1925; thence by descent to the present owner)

Eduard Gaertner is widely regarded as one of the most important practitioners of architectural painting during the nineteenth century. With breath-taking panoramic accuracy and a delicate mastery of light, it is little wonder that he gained the patronage of the King of Prussia, Frederick Wilhelm III, as well as the Tsar of Russia, Nicholas I, during his lifetime.

Painted in 1840, the present view of Moscow is a masterpiece of perspective, colour and acute observation and follows Gaertner’s visits to Russia, first to Saint Petersburg in 1837, and again to Moscow and Saint Petersburg from 1838 to 1839. The fact that a European artist travelled to Moscow was rare during the nineteenth century as the majority of foreign artists went to the capital, Saint Petersburg. Gaertner was motivated to visit Moscow as he had been commissioned by Frederick William III to paint a panorama of the Kremlin (1839, Berlin, Charlottenburg Palace). The view is looking out from the Church of Nikita the Martyr on Tagansky Hill, also known as Shvivaya Gorka (fig. 1). The large neo-classical building on the left is the Moscow Orphanage, standing on the Moskvoretskaya Embankment of the Moskva River (fig. 2). The stretch of the river nearest to the artist follows the Kotelnicheskaya embankment, on the far left. The Kremlin can be seen in the distance with Saint Basil’s Cathedral overshadowed by the lime washed walls of the Kremlin wall including Spasskaya Tower to the left.

A group of worshippers kneels at prayer on the veranda, facing the church and presumably the altar inside. A man in the foreground gently leans on the balcony edge, observing the towering view of the city but his eye is also caught on the elegant company in their Sunday best arriving at the church. He is clearly a nod to the Rückenfigur, or figure seen from behind, one of the favourite devices of the German Romantic artists, notably Caspar David Friedrich, to lead the viewer into the composition.

Through his use of a fixed architectural feature in the form of the canopied veranda of the church in the foreground, contrasted with the architecture of the city in the background, Gaertner has created an astonishing sense of perspective. This technique was also employed by Gaertner in the many versions he painted of his panoramas of Berlin from the rooftop of Friedrichswerder Church (fig. 3). Similar methods were employed by Canaletto who may well have been an inspiration for Gaertner. Canaletto’s bold composition London: The City seen through one of the Arches of Westminster Bridge, (c. 1746, Duke of Northumberland, Alnwick Castle) is an earlier prelude to the effect achieved by Gaertner in the present work. Canaletto’s use of the arch of the bridge placed off centre to the viewer, allows for our eyes to focus on the architecture around St Paul’s Cathedral in the background. Like Canaletto, Gaertner might have been aided by a camera obscura, also known as a pinhole camera, when he sketched the layout of his painting. This has long been suggested by art critics although this was never specifically mentioned by Gaertner in his working notes. He did reference a 'drafting machine' and some of his sketches were done on tracing paper.

As in his other view paintings, Gaertner captures his urban scenes as places inhabited by, and in the service of, its residents. Whilst in his other views of Moscow he captures more of a figural city scene with its citizens either hurrying with a sense of purpose or enjoying the serenity of the day, the present work is a still moment in time allowing us to contemplate the urban landscape from a distance as we reflect on our place within it.