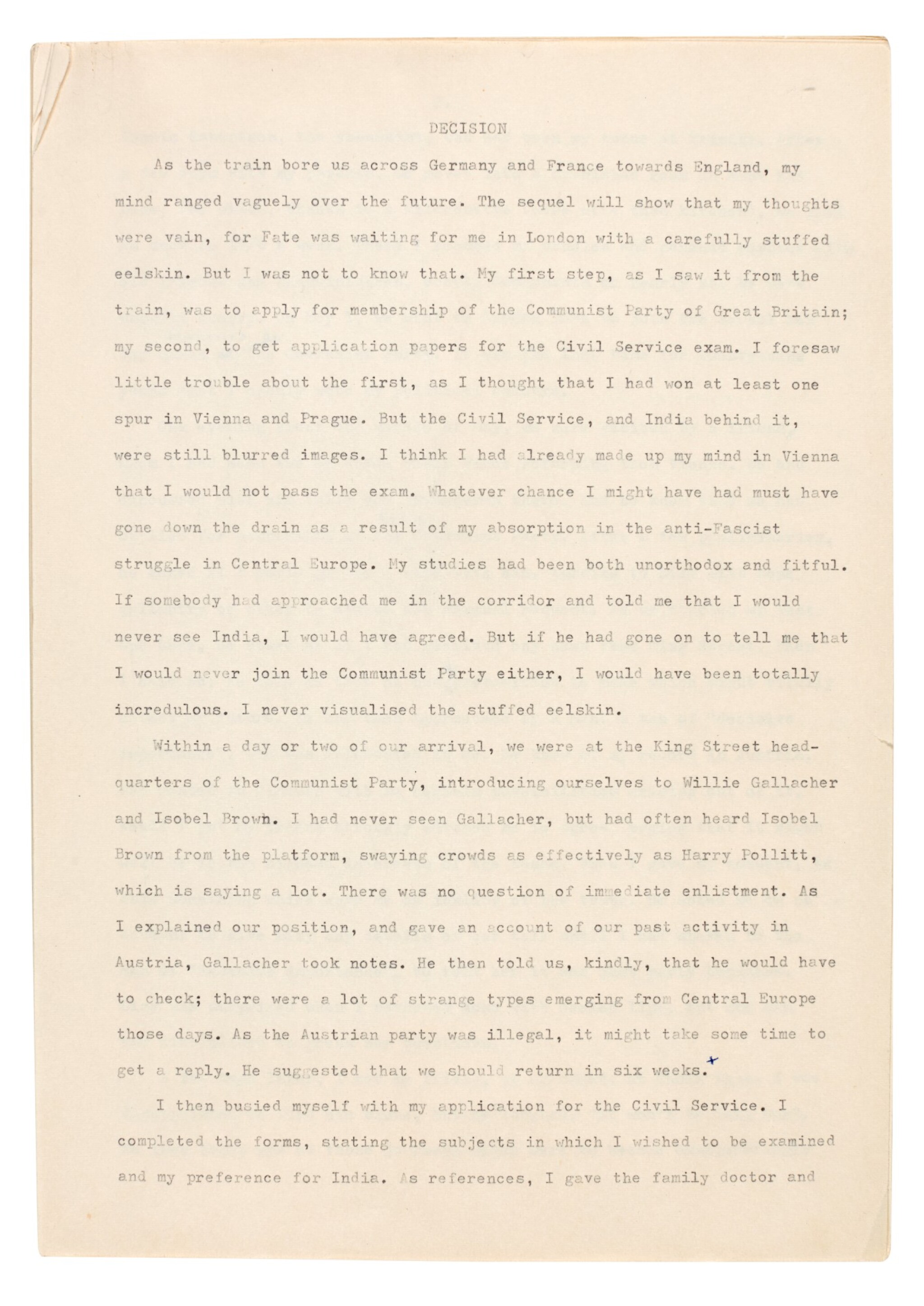 (i) Section on his childhood, family, and schooldays ("...I was a godless little anti-imperialist before I reached my teens, a fact for which my conventional kindergarten and prep school training must take much credit..."), headed "2nd draft" in blue biro on the first page, autograph cancels and corrections in blue biro, 14 numbered pages and one page of footnotes

(ii) Section, headed "Decision", on his decision to join the Communist Party, first meetings with the KGB, and his decision to spy for the Soviet Union, autograph corrections and minor revisions, 13 numbered pages

(iii) Section on his early assignments for the KGB, including the recruitment of other spies ("...The reader does not need to be told that, in respect of Maclean, we were successful; and he will not be foolish enough to expect revelations about other names on the list. Except for Burgess - Burgess was a very special case..."), his obtaining of information through his journalistic credentials and by spying on friends (...My first assignment was to make a complete list of all my friends...with every detail...I could remember..."), and membership of the Anglo-German Fellowship, autograph corrections and minor revisions, 15 numbered pages

(iv) Section on his move into journalism, covering the Spanish Civil War, on the orders of his KGB handlers, four numbered pages

(v) Further fragments of the same sections in a folder labelled "Rejected Drafts 1", including earlier rejected drafts, with autograph corrections and revisions, and carbon-copy duplicates, 70 pages

altogether 117 pages, loose in a yellow folder labelled by Philby on the upper cover "Working Drafts", and with a Russian inscription in Philby's hand ("...If R.I.V. [his wife Rufina] kills me she will have more than enough reason to do so [trans.]..."), initialled in English characters ("K.P."); housed in a red leather folder by Asprey

"...I began to appreciate Otto's [his KGB handler's] wisdom in warning me that much of the path ahead would be heavy going...It was a formidable assignment which lasted thirty years and more, until well after my arrival in Moscow..."

THE MOST SUCCESSFUL OF THE CAMBRIDGE SPIES RECOLLECTS HIS EARLY LIFE FROM EXILE IN MOSCOW. These memoirs detail Philby's childhood as a son of Empire and details the experiences that led him to an unshakeable belief in Marxism. He was born in British India, the son of an eminent orientalist, sent back to Britain for a boarding school education, before going on to read History at Cambridge. Philby witnessed the street-fighting between Fascists and Communists in Vienna in 1934 and returned to England determined to join the Party. A secret rendezvous in Regent's Park with an undercover Soviet intelligence officer led instead to his decision to turn spy. With his establishment background it was not difficult for Philby to infiltrate British institutions and in 1940 he was recruited into MI6 by Guy Burgess (whom Philby had earlier recruited to Soviet Intelligence). By 1949 he was head of MI6 station in Washington. In 1951 he warned Burgess and Maclean that they were under suspicion, ensuring that they were able to flee to Moscow. He was recalled from Washington in the ensuing scandal but, remarkably, MI6 continued to employ him as an agent in Beirut until he finally absconded to Moscow in 1963.

Extracts from this typescript were published in the Sunday Telegraph on 2 and 9 May 1993; otherwise it is unpublished.