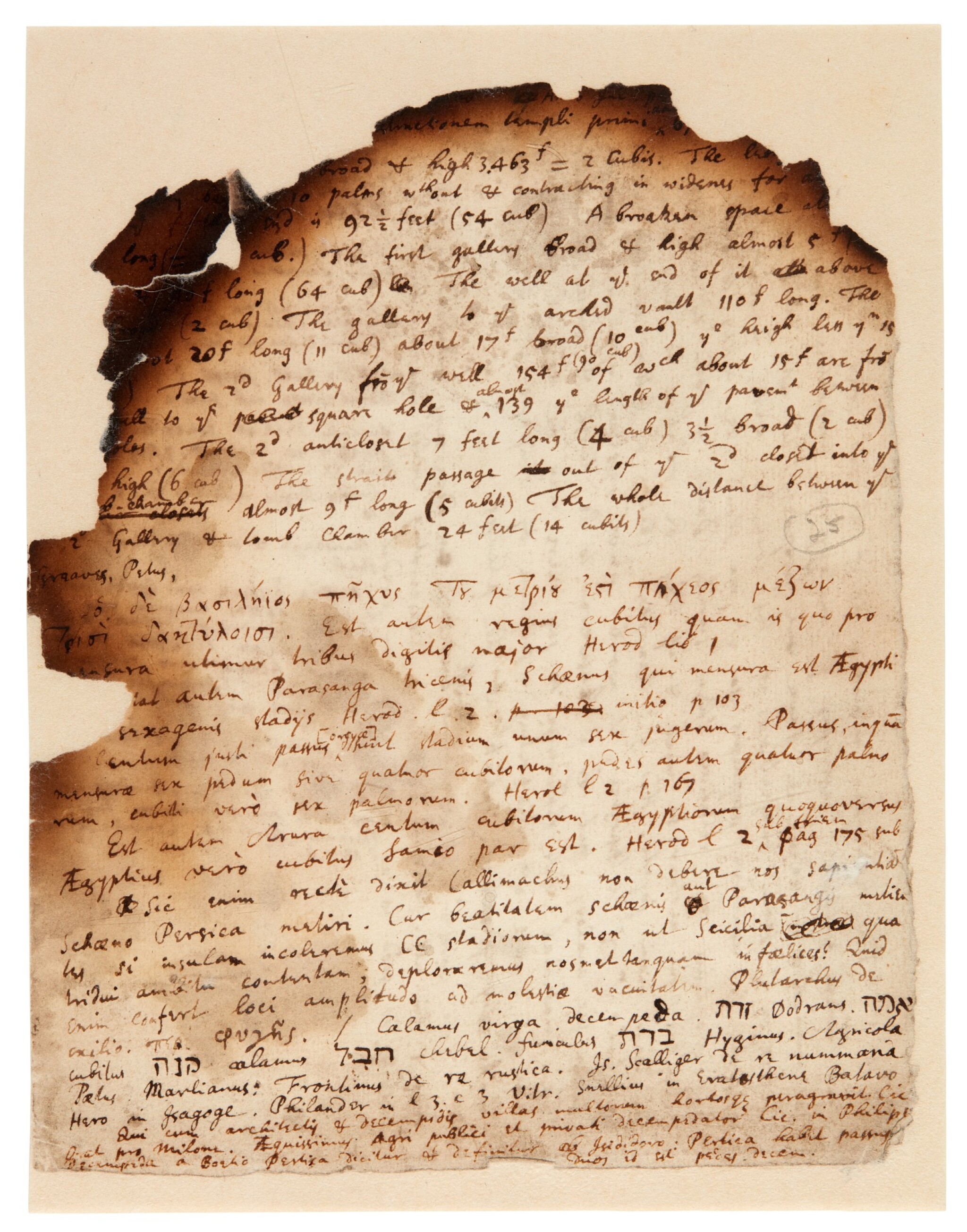 (i) [recto] Notes on dimensions of the Great Pyramid, beginning ("Arabica Ipse Greavius..."), making use of J. Greaves, Pyramidographia, calculating the royal cubit ("Cubiti Regii") as one-hundredth of the width of the pyramid, and showing that the dimensions of entrances, tunnels and chambers were all planned in royal cubits, 38 lines, Latin, with extensive revisions and corrections; [verso] note on Greaves's calculation of the Roman foot and a comparative list of ancient and modern measures, also drawn from Greaves's work, including the Parisian foot, Rhineland foot, Venetian foot, Attic foot, Egyptian (royal) cubit and measures used in Rome, Turkey, Persia, and elsewhere, 38 lines, Latin, with corrections and revisions; single leaf, 192 x 155mm

(ii) [recto] Notes on the royal cubit and other ancient units of measurement, followed by calculations on the dimensions of the Great Pyramid, its proportions and ratios, and further notes on the stepped shape of the pyramid's exterior ("...[th]ey diminish neither in the breadth of all alike. But tis proportional to the height of each so that a right line from top to bottom will touch the outward angle of each...") and dimensions of chambers and galleries, 34 lines, English and Latin, with, written from the bottom, notes on ancient measures, including the ancient Olympic stade (stadium), the Attic and Roman foot ("...Rom. foot to Attic foot as 25 to 24 Philander in l[iber] 3 c 3..."), the Hebrew (Sacred) cubit, and the relative antiquity of ancient measures deriving from Hercules and Moses, 16 lines, Latin and English; [verso] address panel ("For Mr Isaacke Newton | a Fellow at Trinity | Colledg | at Cambridg"), and mathematical calculations, and with remains of red wax seals; single leaf, 238 x 190mm

(iii) [recto] Notes on the dimensions in cubits of the interior galleries and chambers of the Great Pyramid, with notes on the Egyptian (royal) cubit and other measures drawn from Herodotus and other sources, 38 lines, one correction, in English, Latin, Greek, and Hebrew; [verso] reading notes on the analogy of Biblical prophecies, especially those of Daniel and John ("...wisedome to contrive prophesies so that one should be a key to another [... if] any prophesies be relative then surely Daniel & John to each other, [...] resemble one another so much & if they be relative in any thing then [...] in their main joynts..."), with additional advice on rhetorical method ("...Soft words & hard argument soonest overcome an adversary & offend no sort of f[riend] Exasperating words usually beget that like [...] never do good to a mans cause or credit..."), 16 lines, in English, with notes on different ancient measures and citing various sources written down the side, 32 lines, Latin and Greek; single leaf, 190 x 155mm

Newton was not the first of the age of reason, he was the last of the magicians. - John Maynard Keynes

ISAAC NEWTON ON THE GREAT PYRAMID. The pyramids at Giza are not just the greatest architectural marvels that survive of the ancient world: to Newton, as to many others, they were a key that could unlock profound secrets. The Great Pyramid could help him glean an understanding of Biblical prophecy; it could lead him to a knowledge of the timing of the Apocalypse; he also is likely to have hoped that it could provide the proof for his Theory of Gravity.

Newton was certainly not alone in believing that the ancient Egyptians had access to profound knowledge that was lost to the modern world. The searching out of ancient occult secrets was a central trope of alchemy, a subject which Newton studied deeply. These notes reveal Newton seeking out an underlying structure to the pyramid: the unit of measurement used by its builders. Drawing on a range of ancient and contemporary sources, especially John Greaves's Pyramidographia (1646), he compared a wide range of measurements including external dimensions, the lengths of tunnels or galleries, the height of chambers, and the size of individual bricks. He aimed to prove that all of these had been calculated from a common unit of measurement: the royal cubit.

Newton hoped that quantifying the royal cubit from the Great Pyramid would in turn allow the precise dimensions of other ancient measures to be established, which would be enormously important for Newton for a number of reasons. Newton had been grappling with the theory of gravitation since the mid-1660s, but in order to demonstrate his calculations on a planetary scale he needed an accurate measure of the circumference of the Earth. Newton believed it likely that the ancients had been able to measure the Earth using techniques lost to modern man. The figures given by Eratosthenes (3rd century BCE) did not fit Newton's propositions for gravitational attraction so he turned to the earlier figure given by Thales and Anaximander in the 6th century BCE, which was that the Earth's circumference was 400,000 "stades". Assuming that the Greeks took their measures from the Egyptians, it should therefore be possible to quantify the stade from the cubit, and the earth from the stade. Newton abandoned this line of argument before the publication of the Principia, but it is likely that when making these notes he hoped that the pyramid would give him the measure of the Earth and prove gravitational theory.

Newton's discoveries in mathematics and natural philosophy are of course the superlative achievements of which his reputation rests, but to Newton himself they were secondary to his "greater" studies in alchemy and theology. It was the latter that was the greatest motivation for his research on ancient metrology. Establishing the precise length of the Egyptian cubit would allow him to reconstruct in turn other ancient measures, crucially the sacred cubit of the Hebrews, and so be able to reconstruct with precision a building that was, to Newton, of much greater import even than the Great Pyramid: the Temple of Solomon. Newton's religious beliefs were complex, heterodox, and idiosyncratic. He rejected the orthodoxy of the Trinity, believing instead that Christ the son was not an equal part of the godhead but an intermediary figure between God and man. He was deeply interested in the prophetic books - especially the Apocalypse - which he naturally interpreted to support his theology, and which he believed gave a chronology incorporating both the early struggles of the Church and events of the future, especially the Second Coming. Just as Biblical chronology had a hidden significance, so the dimensions of objects described in the Bible had a figurative meaning, and no object was of greater import than the Temple of Solomon, described in detail by Ezekiel and the setting of the Apocalypse. An exact knowledge of the Temple's architecture and dimensions was therefore needed to correctly interpret the Bible's deep and hidden meanings. The presence of reading notes on the prophecies of Daniel and John alongside his notes on metrology in these pages underline the interconnectedness of the two subjects in Newton's mind.

These notes are part of Newton's astonishingly complex web of interlinking studies - natural philosophy, alchemy, theology - only parts of which he ever believed were appropriate for publication. It is not surprising that he did not publish on alchemy, since secrecy was a widely-held tenet of alchemical research, and Newton's theological beliefs, if made public, would have cost him (at least) his career. He left behind vast manuscript writings on biblical exegesis and other theological subjects, presumably in the hope that his secret knowledge would reach a select and receptive readership in future generations. The true range of Newton's writings has only become apparent remarkably recently. Such was Newton's reputation as the exemplar of the Enlightenment scientist that for generations there was little willingness to publish material that might seem to undermine that status. It was only with the sale of Newton's papers by the Earl of Portsmouth in these rooms in 1936 that the scale of his interest in alchemy, in particular, became generally recognised, and it is even more recently that the extent of his theological writing has been acknowledged.

Newton's work on ancient metrology was not, in itself, particularly contentious. These notes were related to a more substantial manuscript treatise on the cubit dating from the 1680s (now Yahuda Ms. 2.4, National Library of Israel, Jerusalem, Israel), which was itself an appendix to a much larger work on the Temple of Solomon. In 1737, shorn of its intellectual context, this treatise became one of the few non-scientific papers that were judged appropriate for publication in the years after Newton's death. Translated into English as "A Dissertation upon the Sacred Cubit of the Jews and the Cubits of the several Nations; in which, from the Dimensions of the greatest Egyptian Pyramid, as taken by Mr. John Greaves, the antient Cubit of Memphis is determined. Translated from the Latin of Sir Isaac Newton", it was published in The Miscellaneous Works of John Greaves. The only other related work that came into the public domain before the 20th century was chapter five of Chronology of Ancient Kingdoms Amended (1728), a late work by Newton in which he hid his true theological beliefs, and which provided a terse description of the Temple of Solomon without any discussion of its significance.

MANUSCRIPTS BY NEWTON TOUCHING ON SO MANY ASPECTS OF HIS PROGRAMME OF STUDY - FROM GRAVITY TO THE APOCALYPSE - ARE EXCEPTIONALLY RARE ON THE MARKET. Although fragmentary and damaged by fire, these unpublished notes are of great interest. Newton's papers suffered fire damage at a very early stage - legend has it that his dog, Diamond, jumped on a table and upset a candle - so the scorching to these papers is not unusual. They are likely to have been part of a larger lot sold in the 1936 auction of the Newton papers, but they cannot be positively identified in the sale catalogue.